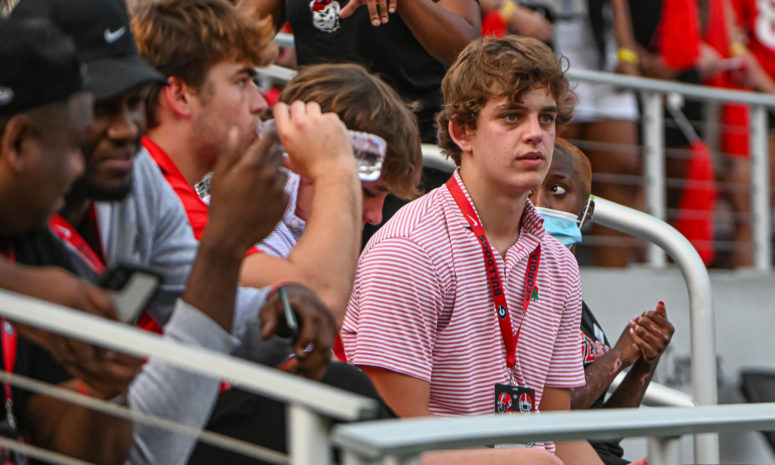 ATHENS, GA - SEPTEMBER 18: Arch Manning from Isidore Newman in New Orleans, LA on a visit to Georgia before the college football game between the South Carolina Gamecocks and Georgia Bulldogs on September 18, 2021 at Sanford Stadium in Athens, GA. (Photo by John Adams/Icon Sportswire via Getty Images)

We’re getting closer and closer to 2023 five-star quarterback Arch Manning making his college football decision. Ahead of that big announcement, a few teams are starting to really stand out from the crowd.

Appearing on the 247Sports Football Recruiting Podcast, college recruiting insider Steve Wiltfong identified three teams who have done “a really good job” of recruiting the Manning scion. He spoke glowingly about Alabama, Georgia and Texas, and ranks them highly among the half-dozen supposed finalists.

Wiltfong also made it clear that LSU, Florida and Ole Miss are in the mix. But it seems that two SEC titans and future SEC titan are making the most noise right now.

“I think that Alabama, Georgia and Texas, particularly, have done a really good job with Arch, who has high interest in all the schools I mentioned. LSU’s making a later move here under the new coaching staff, and the same goes for Florida, and I think he wants to give those programs a good look. He’s intrigued by them,” Wiltfong said.

Arch Manning is the most hyped quarterback prospect since Vince Young and possibly all time. Given his pedigree and the fact that he’s already surpassed his famous family in some regards as a high school quarterback, it’s easy to understand why.

247Sports rates Manning as the No. 1 overall prospect in the Class of 2023. He’s 25-6 as a starter and has led Isidore Newman to the Louisiana state playoffs each year.

Much like his uncles and grandfather, Manning has the potential to be a transcendent talent in college and the NFL.

Where do you think Arch Manning will commit?