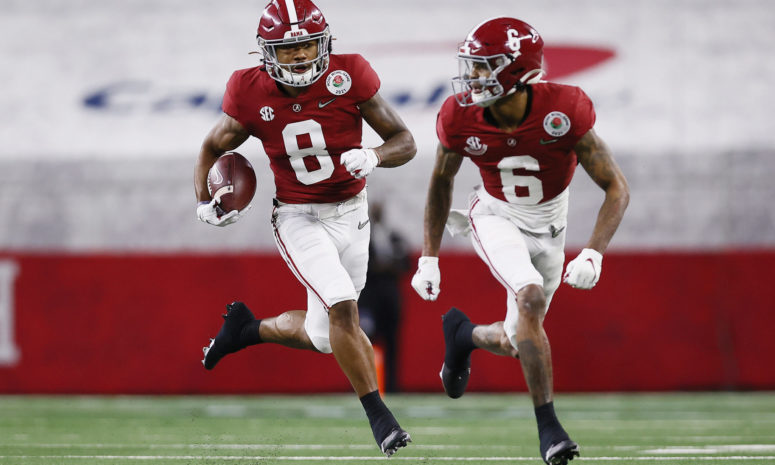 While he won’t be suiting up and running drills at the NFL combine this week, Alabama wide receiver John Metchie is still making his presence felt.

On Wednesday afternoon, the former Crimson Tide star met with the media in Indianapolis to discuss a plethora of topics. During the media engagement, he was asked to name the best corner he faced in college.

Normally when an athlete is asked to name the best player they faced, that player names someone from a different team. However, Metchie’s fiercest opponent saw him in practice every day at Alabama.

Alabama WR John Metchie tells @BenverBroncos #Broncos Pat Surtain II is the best corner he went up against in college. Said Surtain helped him become one of the best receivers in college football.

The pick makes sense. Metchie and the other Crimson Tide receivers faced arguably the best corner taken in the draft in recent years.

Denver selected Surtain with the No. 9 overall pick in the 2021 NFL draft and he immediately returned that investment. Although he wasn’t named to the Pro Bowl, the former Alabama star made it clear he’s already one of the best in the game.

Metchie will get the chance to show teams just how good he can be in a few months. After suffering an ACL injury, he should be good to go when training camp rolls around.

Which team will draft the former Alabama star wide receiver?

We’ll find out in a few weeks.