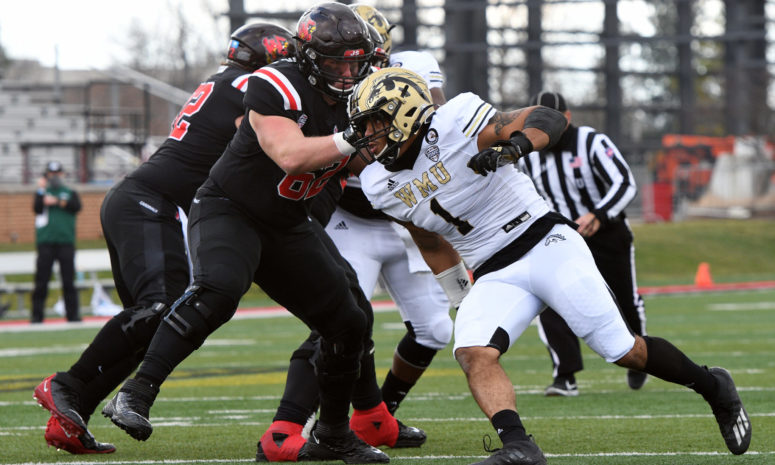 Every year, the NFL Draft features a handful of “sleepers.” Western Michigan defensive end Ali Fayad may fall in that category this year, but make no mistake, he’s a game-changer.

Fayad was always considered an impact player for the Broncos, but he managed to take his game to another level in 2021. He finished his final season of college football with 40 total tackles, 13 sacks and two forced fumbles.

Now, Fayad is ready to show coaches and scouts that he has what it takes to have that type of production at the pro level. Earlier this month, he did just that by having a strong showing at the Shrine Bowl.

We caught up with Ali Fayad to discuss his career at Western Michigan, experience at the Shrine Bowl, why he feels like he’s flying under the radar and much more.

AF: The Shrine Bowl was awesome. It was a great experience not just on the field but off the field as well. You get to spend time with players on the same journey as yourself. I definitely built some good relationships along the way. I had fun dominating against strong competition. I’ve always been judged for playing in the MAC, so it felt great to do what I did against other good players.

The Spun: Do you feel like people are sleeping on you in this draft process, and if so, do you prefer it that way?

AF: 100 percent. I feel like people are sleeping on me. Not even getting an NFL Combine invite has put a chip on my shoulder. I’ve been the underdog since high school, but I am going to grow out of it once we all meet in the NFL. It is what it is. Like I said, I can only control the controllables. I’ve been the underdog, and I’m cool with it. I’m going to bite like the pit bull I am.

The Spun: How do you use that motivation to fuel your play?

AF: With everything I do. The meals that I eat, the workouts that I do, the stretches that I do, the film that I study. My goal is to be one of the best players in the NFL. Not being a participate in the NFL Combine is disappointing, but it gives me an extra motor. If I was a V8 before, I’m a V12 now.

The Spun: Were you able to connect with certain teams?

AF: Most definitely. I feel like I turned a couple of heads during my time at the Shrine Bowl. I thought I won a lot of one-on-one matchups, I showed my physicality, and I showed that my size benefits me. I felt like it was a strong showing for me and that it’s not the MAC that led to my production, it’s Ali Fayad.

The Spun: You were always a productive player for Western Michigan, but this past season you took your game to another level. What was the biggest factor?

AF: Honestly, everyone has to have their downfall. In 2020, I got hurt. That changed my whole mentality. I taped up a MAC logo and an NFL logo above my bed in my apartment. Every time I started getting negative or lazy, I looked up and immediately received internal motivation. I wouldn’t stop at anything to get what I wanted. I wanted double-digit sacks and MAC Defensive Player of the Year.

The Spun: You finished your career with a stellar performance at the Quick Lane Bowl. What was that moment like after the final whistle was blown?

AF: It felt amazing to leave as a champion of the Quick Lane Bowl. A lot of emotions were running through me because it was the last college game. I’m always ready for my next goal, though. So I was appreciative of my time there, while also being ready for my next step.

The Spun: You’ve shown off a variety of pass-rushing moves. What is your best move right now?

AF: I would say the spin and the dip, for sure.

.@WMU_Football edge Ali Fayad has been one of the biggest risers from either team at @ShrineBowl. Been showing a variety of pass rush moves and counters since the first snap. This was filthy https://t.co/qtkLxZdY7W

The Spun: Which pass rushers do you like to study?

AF: Von Miller is No. 1 for me. Dwight Freeney has a money spin move. Robert Mathis, T.J. Watt, Aldon Smith and Khalil Mack are also some players I like to study. I’m always trying to bring their sauce to the table while also putting my spin on it.

The Spun: Your former teammates, D’Wayne Eskridge and Jaylon Moore, were drafted last season. Were you able to receive any advice from them?

AF: All the guys that were drafted before me hit me up. We all talk whenever I need anything about the draft process. To be honest, I’ve been trying to go my own way. If I ever have any questions, I hit them up. But at the same time, I’m trying to make sure I go my own route as well.

The Spun: What is an NFL team getting in Ali Fayad?

AF: You’re getting the hardest worker in the room and the best hunter in this draft.

Work is one thing, execution is another. Ride your wave no matter how bad the water get keep surfing 🌊🏄‍♂️ pic.twitter.com/tec9RIvAj6

“Ali Fayad’s on the field production speaks for itself, wherever he goes, he dominates,” Selwyn Roberts of Steinberg Sports said. “What I like about him even more is his love for the game. When other athletes seek vacation in the offseason, Ali’s in the gym training to get better, he’s asking for film and playbooks looking for an edge on his opponent. His passion and love for the game is unmatched.”

Fayad will have the chance to boost his draft stock at his pro day.