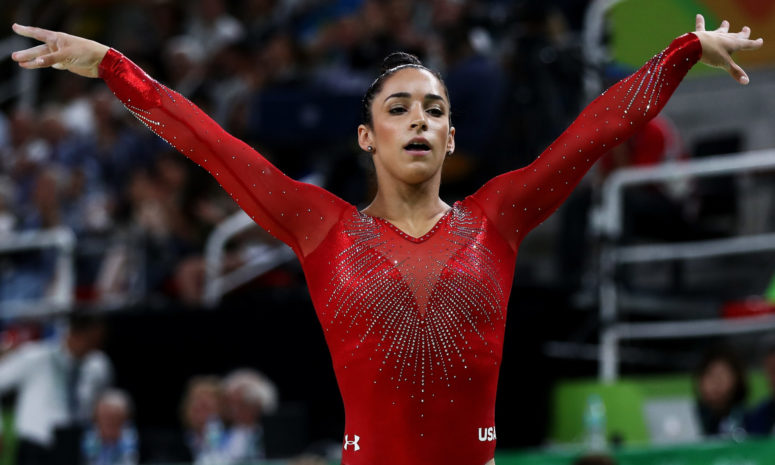 RIO DE JANEIRO, BRAZIL - AUGUST 11: Alexandra Raisman of the United States competes on the balance beam during the Women's Individual All Around Final on Day 6 of the 2016 Rio Olympics at Rio Olympic Arena on August 11, 2016 in Rio de Janeiro, Brazil. (Photo by Elsa/Getty Images)

Over the years, Olympic gold medalist Aly Raisman has been a vocal mental health advocate. While she is certainly not moving away from that role anytime soon, she’s now ready to discuss her migraine journey.

Raisman, a two-time Olympian and six-time Olympic medallist, has dealt with the debilitating symptoms of migraines for most of her adult life.

Believe it or not, migraine is the third most prevalent illness in the world. What makes it so challenging is that it can go undiagnosed for years, which was the case for Raisman. It wasn’t until Raisman met with Dr. Andrew Blumenfeld that she was able to find the right treatment. She was able to find relief with UBRELVY, a prescription medicine used for the acute treatment of migraine attacks with or without aura in adults.

Even though Raisman has found the right treatment, that doesn’t mean she’ll just ignore her past.

We caught up with Aly Raisman to discuss her migraine experience, her partnership with UBRELVY, her gymnastics career and more.

UBRELVY is a prescription medicine used to treat migraine attacks in adults. It’s not for migraine prevention. Do not take with strong CYP3A4 inhibitors. In clinical trials many individuals (60%) had pain relief within two hours, with some (1 in 5) achieving pain freedom. Many (2 out of 5) had absence of their most debilitating symptom (light sensitivity, sound sensitivity, or nausea) within 2 hours after taking UBRELVY. Trial participants took UBRELVY within 4 hours of a migraine attack.

The Spun: Can you tell us about your new partnership with UBRELVY?

Aly Raisman: I’m partnering with UBRELVY and AbbVie to raise awareness for migraines by sharing my own experience. I decided to partner with UBRELVY because finding a treatment that works for me has been so important because I’ve been struggling with nausea, fatigue, light sensitivity, head and neck pain. So once I was formally diagnosed with migraine, I felt really validated. It’s really helpful for me to finally understand why I’ve been feeling the way I do. I wanted to talk about it today because, at first, I didn’t associate my symptoms with migraines and I didn’t know what migraine symptoms were. I’ve learned so much about migraine through my own experiences with a neurologist. I realized that so many people out there go undiagnosed, and that was me for a very long time. My mom also struggles with migraines, so it’s really important for me to share my own experience in hope that somebody out there who has similar symptoms has the courage to advocate for themselves and go to a healthcare professional to see what will work for them.

Aly Raisman Didn't Recognize Her Migraine Symptoms: 'As an Athlete, I Always Powered Through' https://t.co/68B9pOpFVD

The Spun: What are those next steps in terms of raising awareness for migraine?

AR: I think that’s a really great question, and it’s something I think about a lot. I think it’s so important to be advocates for ourselves, and that’s so much easier said than done. I think so many of us, myself included, are so busy and doing so many things. Often times, I think we diminish how we feel. I think for a really long time as an athlete I tried to push through. Even when I went to the doctor and told them how I felt, I didn’t understand what migraine was and it was something that didn’t come up until I met with a neurologist. Dr. Blumenfeld, who is actually on the call, listened to me and took the time to validate how I was feeling.

I think the word validation is something important for me and my own healing journey. With everything I’m going through, I think it’s important to give myself the time to reflect on how I’m feeling and knowing what I’m feeling is not made up. You have to have the courage to ask questions and continue to seek answers. It can be scary to ask for help or to be honest about how you’re feeling. I think a lot of people don’t understand how debilitating migraines can be. I’ve certainly been in a lot of important situations where I had a migraine and I didn’t even recognize what it was. I was always afraid people would judge me or people would say I’m being difficult. The more we talk about it, the more we can recognize what people are going through and help them out.

The Spun: Were there moments where you pushed through migraines during your athletic career. What were those type of experiences like?

AR: I pushed through a lot when I was training, probably too much. It’s something I’m still navigating in my life today. I feel like I still haven’t even fully recovered from competing at the Olympics and training at that very high level. It’s been really hard for me to navigate how to feel better, and I think through the last few years I’ve tried to take pauses and really reflect on how I’m feeling. I think when I was training I would struggle with very bad nausea. I would feel so sick, and after I’d compete, the back of my scalp would be sensitive to touch. I always assumed it was from having my hair up to tight because I didn’t understand what I was dealing with and didn’t take the time to advocate for myself. I wish I could’ve met Dr. Blumenfeld years ago. But I think it’s important we really reflect on what we’re doing. It’s important because if we’re not going to, then we can’t really rely on other people to do so.

Hear from U.S. Gold Medal Gymnast @Aly_Raisman on her definition of success.

AR: I am very proud of my gymnastics career. I’ve actually been taking time to let it sink in. I’ve been so busy and powering through stuff that I don’t take time to reflect on my experiences. At 27 years old, I feel grateful for the experiences I’ve had and I’m very excited for the next chapter of my life. The more I reflect on my career, the more fortunate I feel to have this platform and opportunity to speak with you because I think talking about issues I’m passionate about is very fulfilling.

The Spun: You’ve done a great job of using your platform to raise awareness for certain topics. What inspires you do to that?

AR: When I first shared my story publicly about being a survivor of abuse, years ago, I never expected to receive the support that I did. I was very nervous to speak up, I was very nervous to talk about what I had been experiencing. I never imagined how many people could relate to me. I’ll walk my dog or I’ll be at the grocery store and people will share their stories of struggling with being a survivor of abuse. I realize when I’m open and honest about what I’m experiencing, a lot of people can relate. That has helped me feel less alone and has given me the courage to speak up about things that are impacting me.

I’ve tried to be really honest that over the last several years I haven’t been feeling very well. I’ve been struggling with extreme nausea and fatigue, and it has really impacted my life in ways I don’t want it to. I try to be as honest as I can because the people I meet bravely share what they’ve been through. I hope by me sharing my experience with migraine or something else I’m going through, somebody out there will get the help they need. I just think the power of people being vulnerable and speaking their truth is so important. There are a lot of people out there who do struggle with migraines and it goes undiagnosed. I hope somebody out there is listening and has the courage to get the help they need.

Because she didn’t recognize her migraine symptoms during her Olympic career, Raisman pushed through any obstacle she faced. The fact that she managed to have so much success while suffering from migraine is impressive to say the least.

“It’s amazing how well she did in the Olympics considering she was suffering from this condition,” Dr. Blumenfeld said. “It slows your thinking, makes you tired, and she was under bright lights. All of that stuff is aggravating. To do what she did with this condition, I’m impressed.”

Raisman plans on using her platform to make sure anyone dealing with migraine symptoms gets the right treatment from their healthcare provider.