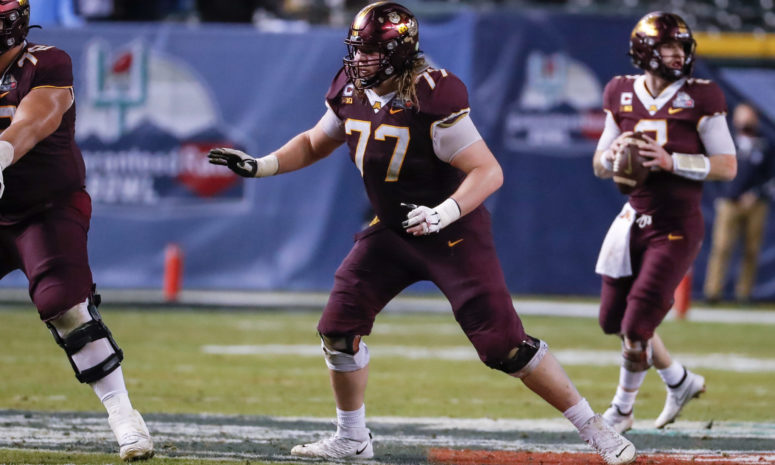 Minnesota offensive lineman Blaise Andries had a successful run at the collegiate level, earning All-Big Ten honors three times. Now, he’s ready to show that he can make a similar impact at the next level.

Following the Golden Gophers’ win in the Guaranteed Rate Bowl, Andries declared for the 2022 NFL Draft. Shortly after that announcement, he received an invite to the East-West Shrine Bowl.

We caught up with Blaise Andries to discuss his time at Minnesota, preparation for the NFL Draft and much more.

The Spun: How has this draft process been treating you?

Blaise Andries: I’m having a wonderful time. I’m really enjoying this process. It’s a lot of hard work, but we signed up for that when we declared. After our final game of the season, I went home for two days, got myself packed up, and flew out to Phoenix to work out at Exos. I’m having a great time getting to know everyone. I’ve been down here for a month and a half. I also had a chance to compete in the East-West Shrine Bowl. They did a great job putting that event together. I had a chance to talk to all the scouts and tell my story. I was a bit limited because of my training the week before, but I’m all good now.

The Spun: Have you made any strong connections with teams?

BA: I definitely feel like I’ve made some strong connections. There were some scouts at the East-West Shrine Bowl that I’ve seen at our practices before. I went up to a scout from the Carolina Panthers and was like ‘You look familiar. You’ve been to a couple of our practices right?’ It went on from there and we started a conversation. He knew my offensive line coach really well. It’s really not that stressful talking to NFL personnel. If anything, it’s fun. I was asked if I’d rather win a Super Bowl or be in the Hall of Fame. Obviously, everyone wants to be in the Hall of Fame, but the answer they’re looking for is that you want to win a Super Bowl. I told them I want to win a Super Bowl. When they asked why, I said, ‘To be honest, in high school I never won a state championship. In college, I never won a Big Ten championship. So it’d be pretty cool to be on a team that’s on top of the mountain.’ They really appreciated that answer.

The Spun: Minnesota’s defensive line was quite loaded with talent. What were those battles in practice like?

BA: They were good stuff [laughs]. During the season, we’d have one day per week where we’d go full-go vs. the defense. There were some good battles. Esezi Otomewo and Boye Mafe are great. There are a couple of underrated guys on that defensive line too. We had Nyles Pinckney, who was the transfer from Clemson. He was only there for a year with me and he was probably one of my favorite defensive linemen to play with. Not only did we respect each other, we were able to get to the point where we’d coach each other up on little things we noticed. He was awesome, and I think he’ll have a good opportunity to have a nice career. We also had the linebacker, Jack Gibbens, who showed out at the NFLPA Bowl. I heard he balled out there.

The Spun: What are you hoping to show at the NFL Combine?

BA: It was awesome getting the invitation. The first thing I did was call my parents and text my friends about it. I saw someone say they got an invite via email so I immediately checked mine to see if I got it as well. I wasn’t supposed to get word until the next day. I filled out the paperwork as soon as I could. I was actually at the Shrine Bowl when it happened.

I’m expecting to go out there and show NFL personnel my best. I’ve been doing a lot of amazing things at Exos. I’ve seen a lot of improvement, seen myself get stronger, faster and more explosive. I’m excited to test my limits at the Combine.

The Spun: Which offensive linemen do you like to study on film?

BA: I played every position but center in college. I like to watch players who can mix in at offensive tackle and offensive guard. I love to watch Tristan Wirfs. He’s super athletic and just an overall mauler. His agent is the same as mine so I’m trying to learn through him. Zack Martin from the Cowboys has been great throughout his career. I like watching Garrett Bradbury from the Vikings. He’s actually working at Exos too right now. I love watching Quenton Nelson at left guard. He’s another player that’s a mauler in the run game. At left tackle, I like to watch Kolton Miller.

The Spun: Is there a particular position you want to play?

The Spun: What is an NFL team getting in Blaise Andries?

BA: Off the field, you’re getting a steady hand. There are no off-field problems with me. You don’t have to worry about that. On the field, I’m versatile enough to play any position on the o-line. I’m willing to do it all for the team.

Most draft analysts have raved about Andries’ run-blocking ability and versatility. He has also received praise for the way he’s able to climb up to the second level of the defense.

Andries will have a chance to boost his draft stock at the NFL Combine. Additionally, he’ll get to showcase his skills at Minnesota’s pro day.