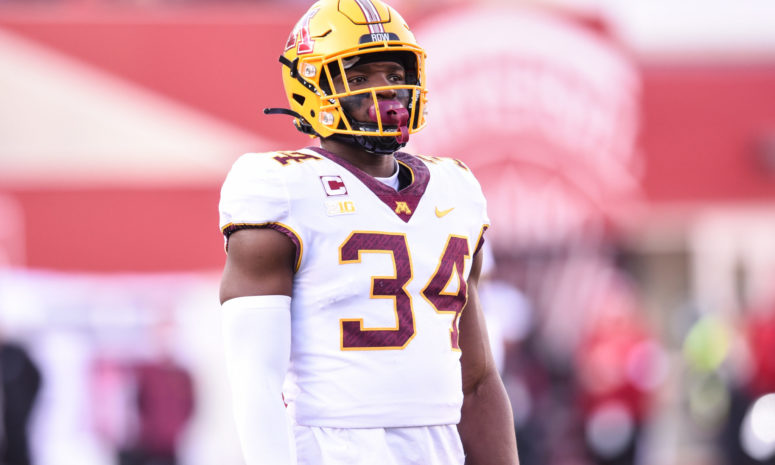 BLOOMINGTON, IN - NOVEMBER 20: Minnesota DL Boye Mafe (34) during a college football game between the Minnesota Golden Gophers and Indiana Hoosiers on November 20, 2021 at Memorial Stadium in Bloomington, IN. (Photo by James Black/Icon Sportswire via Getty Images)

It’s nearly impossible to find a player who did more for their stock at the Senior Bowl than Minnesota pass rusher Boye Mafe. He didn’t just have an impressive week, he legitimately dominated his competition.

Mafe earned National Player of the Game honors after the Senior Bowl wrapped up. That wasn’t much of a surprise considering he had three tackles for loss, two sacks, and a forced fumble.

Even though Mafe’s tape at the Senior Bowl is worthy of several viewings, his work at Minnesota shouldn’t be overlooked. In four seasons with the Golden Gophers, he compiled 87 total tackles, 19.5 tackles for loss, 15 sacks and three forced fumbles.

We caught up with Boye Mafe to discuss his journey to the NFL, experience at the Senior Bowl and much more.

The Spun: You had a tremendous showing at the Senior Bowl. What was that experience like?

Boye Mafe: It was a great experience. I wanted to show my talents as a pass rusher and football player. My main objective was to show that I can play football at the next level. I also did something new – playing with my hand in the dirt. That was something I had to adjust to, but it was still a good experience.

Minnesota edge Boye Mafe at the Senior Bowl (per @PFF):

The Spun: Like you just said, you were asked to play with your hand on the ground in Mobile. That was something you didn’t really do at Minnesota. How was that adjustment?

BM: It was interesting. It was my first time doing something like that. My whole career I was a stand-up pass rusher. Playing in that three-point stance was a little bit interesting, but I learned it. Coaches said they wanted to see that from me. At the end of the day, it was my job to go out and do that. And I feel like I did a good job with it.

The Spun: What’s your favorite memory from your time at Minnesota?

BM: I can’t say there’s just one memory. Beating Penn State in 2019, beating Wisconsin in 2021. It’s hard to sit here and say there’s one moment that was the pinnacle of it all because it would be a disservice to my whole time there. I felt as if my time there was great, and I definitely appreciate it. The whole time spent there I was able to learn about myself as a player and human.

The Spun: Who would you say was the toughest player you faced that week?

BM: There’s talent everywhere in the Big Ten. I got to play against Tristan Wirfs in 2019. I liked playing against Wisconsin and Iowa’s offensive lines because those rivalry games meant so much to us.

The Spun: You’ve had a really unique journey to get to this point. Has it hit you that you’re just a few months away from the NFL Draft?

BM: I don’t know if it’s hit me yet, but I’m realizing that it’s a different light. Early in this process, I saw some of my teammates going back to class. And I was like, ‘Wow, I really don’t have class today.’ I’m realizing that this is different. It hasn’t hit me too crazy yet, but it definitely will soon.

The Spun: Which pass rushers do you like to study on film?

BM: I study a lot of guys, but off the top of my head, I think of Brian Burns, Maxx Crosby, T.J. Watt and Nick Bosa. Honestly, I watch a lot of the guys throughout the league and study their playing styles.

Boye Mafe is just another addition to this absurd EDGE class. pic.twitter.com/oOtiIzZHkm

The Spun: What do you want to show at your pro day?

BM: For me, I want to showcase my speed and versatility. I can see myself on the field, moving, cutting and doing all the drills. I want to see what type of player I can be in certain teams’ eyes.

The Spun: What has kept you motivated throughout this process?

BM: I would say my drive comes from telling myself this is the path I should be on. It’s my mentality with a lot of things. It’s not about the end result, it’s about the process and focusing on that process. I need to do the little things to make sure that I’m ready for my workouts and ready to perform at my best.

The Spun: What is an NFL team getting in Boye Mafe?

He should impress at the @seniorbowl and the NFL Combine with rare athleticism and strength https://t.co/Q6olqifZ46 pic.twitter.com/LMXGJVeZnJ

There’s no question that Boye Mafe will draw a lot of interest from NFL teams over the next two months. NFL Network’s Daniel Jeremiah recently had high praise for the Minnesota product, saying “He’s a first-round talent.”

Mafe could potentially boost his draft stock to first-round status with strong showings at his pro day and the NFL Combine.