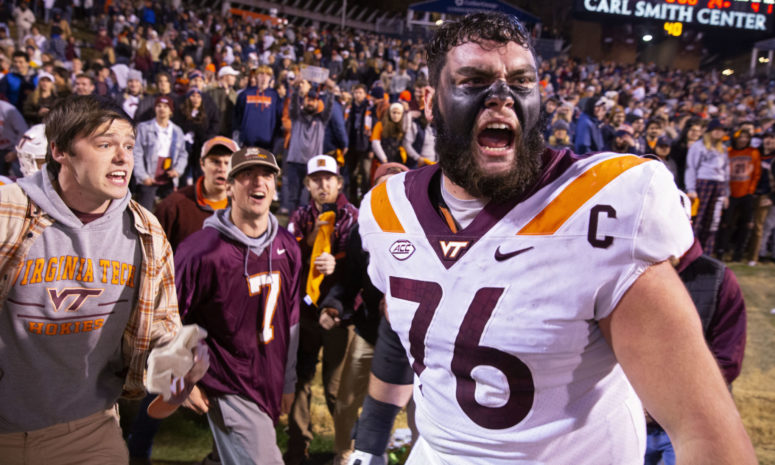 Brock Hoffman had a stellar career at Virginia Tech, earning All-ACC honors twice and winning the Wells Fargo Advisors Humanitarian of the Year award. With his college career officially over, the versatile offensive lineman is preparing himself for the NFL.

Last week, Hoffman had the chance to showcase his skills at the Shrine Bowl. It was a great opportunity for him to have face-to-face meetings with NFL teams.

While it’s still early in the draft process, there’s a lot to like about Hoffman. Not only is he capable of playing center and offensive guard, he competes with an edge that not every player has.

We caught up with Brock Hoffman to discuss his Virginia Tech career, experience at the Shrine Bowl, mindset on every snap and much more.

The Spun: The Shrine Bowl took place a few day ago. How was that experience?

Brock Hoffman: It was an awesome experience. I’ve never been to Las Vegas, so going there for the first time was really cool. Just being a part of the Shrine Bowl and seeing how organized it was is a credit to Eric Galko. You’re able to practice with a bunch of good competition, and it takes place in front of NFL teams. Overall, it’s pretty cool.

Thank you @EricGalko for allowing me to compete in the @ShrineBowl and for putting on such a well organized event! Thankful to have met all my teammates for the week and to walk away with the East Team IOL of the week! pic.twitter.com/JO2rQZwzsO

The Spun: What would you say was the best part about the Shrine Bowl?

BH: I would say the practices and the interviews. Obviously, the game is important because it raises the money for the hospitals. But in terms of what I enjoyed the most, the practices were at the top of the list – especially when scouts and GMs were in attendance. Once the practices are over, you get to talk with teams and discuss your story.

The Spun: You had a really nice career at Virginia Tech. When you look back at your time there, what will you remember most?

BH: I would just say being a part of the offensive line room, especially during the 2020 season. We had Christian Darrisaw, Lecitus Smith, Doug Nester, Luke Tenuta and myself. I felt like we were really talented, and no one could stop us when we had the ball. We were a group that was really close. We would hang out after practice, watch film together, eat together, do anything together really. It was just a fun year, on and off the field.

The Spun: You had the chance to spend your entire career at Virginia Tech with Justin Fuente. Were you a bit surprised by the program’s decision to change up its regime?

BH: I felt like talent-wise, we had a lot of it. Obviously, having those seasons where we won five or six games is disappointing. But I loved playing for Coach Fuente. He was a demanding coach who always wanted to bring the best out of you every game. A lot of my success and growth at Virginia Tech has a lot to do with Coach Fuente and Coach [Vance] Vice. They wanted me to bring my best every single day.

The Spun: Are there any particular offensive linemen you like to study on film?

BH: The main guy I like to watch, especially these last two years is Ryan Jensen. I love his story. He’s from a Division II school and he plays with a chip on his shoulder every game. That’s something I kind of mimic too. I like to get in defenders’ heads and mess with people.

Running directly off of a Brock Hoffman block isn't a bad idea. pic.twitter.com/70S6RjoCsD

The Spun: A lot of people have raved about your physicality. What’s going through your head each snap?

BH: To give you a quick background story, my dad was a college coach. He got out of it as we got older because we were all moving around and traveling. I remember when I started playing football in third grade, he told me ‘If you’re going to start playing football, you’re going to play it nasty. You’re not going to play it soft.’ That has been my mindset growing up, and I’ve only built on that as I’ve gotten more confident. My mindset every play is to win the rep. I don’t care who I line up again, I don’t want to lose the rep. Once I do that, I’m going to do everything I can to mess with the opponent. My mindset is to win the rep, and then mess with you.

For those of you who love “hand fighting” in your offensive linemen, @BrockHoffman76 is gonna be your kinda guy. #ShrineBowl https://t.co/4WRP5MHObg

The Spun: Who did you like competing one-on-one with at the Shrine Bowl?

BH: I would say Marquan McCall from Kentucky. He was a big dude with a lot of mobility. He had some really good moves. It was fun competing against him.

The Spun: Where do you see yourself in the NFL?

BH: I feel like teams view me in a gap scheme, heavy run type of offense. The thing I’m trying to work on is my overall athleticism in terms of getting to the second level. That would help with teams that run a wide zone scheme.

The Spun: What is an NFL team getting in Brock Hoffman?

BH: On the field, you’re getting a guy who is going to be a leader, plays with an edge, plays with a nastiness, and wants to learn from the veterans. Off the field, I care a lot about the relationships I build. I’m going to love the community I end up in.

Several analysts raved about Hoffman’s performance at the Shrine Bowl. The fact that he was voted to the East Team All Shrine Bowl Practice Team validates those reviews.

Hoffman will have the chance to boost his stock at his pro day.