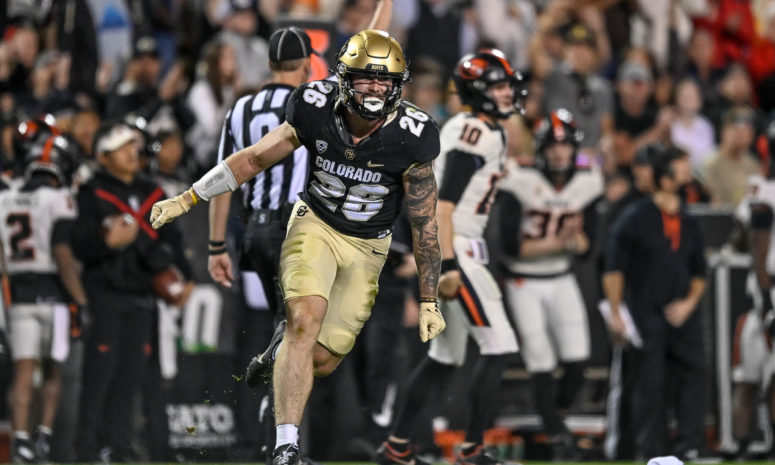 Despite being a productive player in high school, Power Five programs overlooked Carson Wells. Colorado, however, saw something in the talented linebacker.

Wells had to miss his first season with the Buffaloes due to a leg injury. Once he saw the field in 2018, he never looked back.

From 2018 to 2021, Wells had 154 combined tackles, 39 tackles for loss, 17.5 sacks, eight pass breakups and three interceptions. He proved that he can get after the quarterback, drop back in coverage and blow up runs in the backfield.

Although he was overlooked early in his career, Wells’ success at Colorado earned him an invite to the Shrine Bowl. He didn’t squander that opportunity, impressing several scouts in attendance.

Wells might be considered a “tweener” in the eyes of some scouts, but make no mistake, he’s a playmaker.

We caught up with Carson Wells to discuss his Colorado career, experience at the Shrine Bowl, why he feels like an underdog and much more.

The Spun: How was the Shrine Bowl experience for you?

Carson Wells: I feel like the Shrine bowl was great because not only do you grow as a football player but it’s a humbling experience because you see all the Shriner’s kids out there too. It puts things into perspective and shows us how blessed we are to be in this situation.

The Spun: You were named to the East All Shrine Bowl Practice Team. What does it mean to get recognized at an event like that?

CW: My whole life I feel like I’ve been overlooked. I came from a small town in high school. Colorado was one of two Power Five schools to offer me a scholarship. So I’ve always played with a chip on my shoulder. It’s nice to get that recognition. I don’t want to take anything for granted throughout this draft process. I’m just taking every little thing in and enjoying the moment.

The Spun: Is there a certain moment from your Colorado career that you’ll remember forever?

CW: The relationships I built while I was there. We had a lot of turnover as far as the coaching staff was concerned. We went through, I believe, three different head coaches and five defensive schemes while I was at Colorado. My teammates at Colorado were great. Regardless of what happened on the field, those are your brothers who you put the work in with every single day.

The Spun: You mentioned playing in multiple schemes. Do you feel like that’ll give you an edge in the NFL?

CW: I brought up that same exact point to coaches because I’ve seen a lot of football. There are only so many ways you can play your base defense. Every coach would bring a different aspect to the team in terms of their pressure packages and things like that. But my experience in different schemes is a big selling point that I’ve tried to bring up too. I think that’ll make my transition to the NFL a bit easier.

He keeps showing up at the Shrine Bowl Prep.. it all comes to preparation. @wells_16 is prepared!!

A successful pass rush always starts with a great GET OFF. Jet Lean!! 🛫 (That’s the knee over toe to start the engine).

3 steps and break off the o/s foot like a 3 step slant. 📈 pic.twitter.com/wJEPud4PTR

The Spun: How does your mentality change when you’re pass rushing compared to when you’re in coverage?

CW: I do a lot of film study before games. Before the play happens, I take everything into consideration and piece together what the offense might do. But at the end of the day, you’re playing football. I grew up in a ranch, so I feel like having that chip on my shoulder allows me to do a multitude of things on the football field. All the work you do in the dark eventually comes to light, and I feel like that sets me apart from others because I put in a lot of work.

The Spun: Have you had that realization yet that you could be on an NFL team in just a few months from now?

CW: I talked to my mother about that a few weeks ago. This situation is a lot to take in, and it can get overwhelming at times. She told me to take it all in because not a lot of people get to go through this. In 30 years from now, I’ll look back at this moment and be able to share it with my kids. I’m just trying to take this process in.

The Spun: Which players do you like to study on film?

CW: I like to watch T.J. Watt on film. I like his motor and I like the way he plays. I also like to watch the Bosa brothers for the same reason. Another player I’ve watched a lot of is Dante Fowler. My family grew up rooting for Florida, so it was easy to watch him play.

CW: I feel like my 40-time is being projected as a 4.8, but I know I’m going to blow that number out of the water. I need to show people how fast I can move in space.

The Spun: What is an NFL team getting in Carson Wells?

CW: I feel like you’re getting a humble guy who is going to be the hardest worker on the team from Day 1. I’ll play wherever I can – special teams, linebacker, wherever. I’ll be a smart, hard-working individual from the moment they call my name.

Colorado LBs Nate Landman/Carson Wells will be playing on Sundays…

Wells is a heavier/SAM OLB type but also fairly athletic and comfortable in space. Can set edge in run game

Landman is a tackling machine with good take-on & length

Unfortunately, Wells wasn’t invited to the NFL Combine. However, he’ll have the chance to showcase his skills at Colorado’s pro day.

Besides, it’s very evident that Wells likes playing football with a chip on his shoulder.