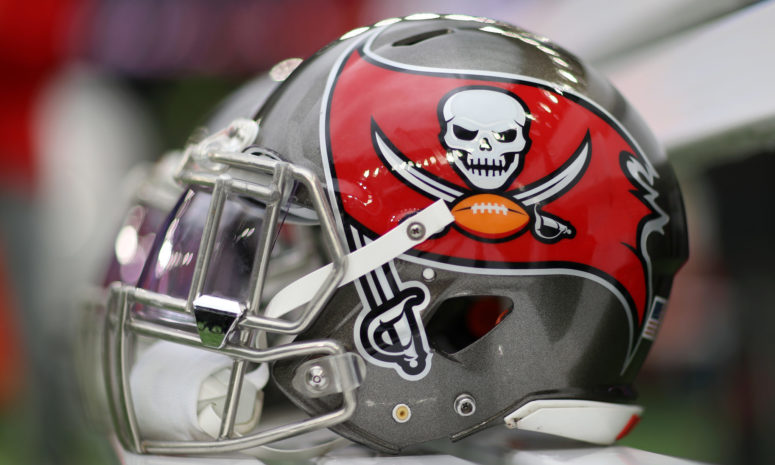 LONDON, ENGLAND - OCTOBER 13: A detailed view of Tampa Bay Buccaneers helmets on the team bench ahead of the NFL game between Carolina Panthers and Tampa Bay Buccaneers at Tottenham Hotspur Stadium on October 13, 2019 in London, England. (Photo by Naomi Baker/Getty Images)

With Tom Brady retired (for now at least), the Tampa Bay Buccaneers are going to need to find a new starting quarterback for 2022.

We’re not buying Bruce Arians saying to not discount the possibility of backup Blaine Gabbert becoming the starter. The Bucs’ solution is going to have to be external, via trade, draft or free agency.

CBS’ Cody Benjamin made some predictions recently for the quarterback carousel, and he thinks the Bucs could look to a former NFC South quarterback to replace Brady, at least in 2022.

Benjamin named soon-to-be free agent Teddy Bridgewater as his pick to start in Tampa this fall.

No doubt Bruce Arians will swing bigger in an attempt at a quick fix, but assuming they don’t go all in for Deshaun Watson and his legal issues, Bridgewater at least keeps the floor relatively high. He also doesn’t break the bank or prevent Tampa Bay from completely resetting at QB in 2023, perhaps after Arians joins Brady in retirement.

After being acquired by the Denver Broncos in a trade last offseason, Bridgewater started 14 games and posted credible stats, completing 66.9% of his passes for 3,052 yards, 18 touchdowns and seven interceptions.

The onetime Minnesota Vikings first-round pick is still only 29 years old and has bounced back from a devastating knee injury in 2016 to become a fairly reliable “bridge” quarterback–no pun intended.

There’s value to that, and we’ll see how much of it this offseason when he hits the open market.