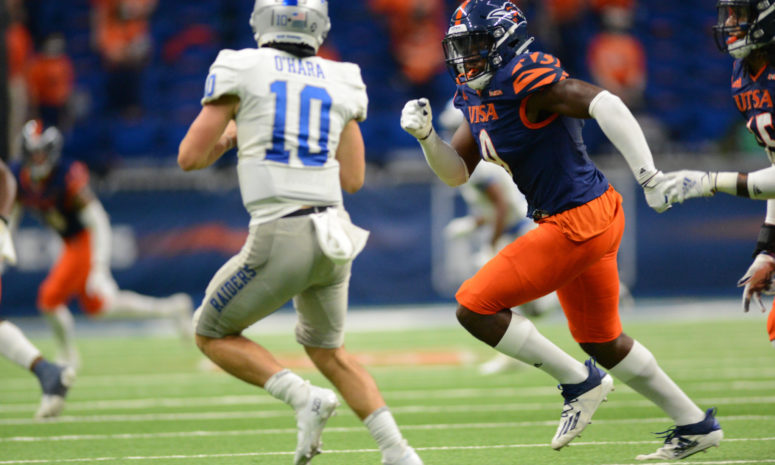 Clarence Hicks’ breakout season in 2021 may have been a pleasant surprise to some, but he always knew he was capable of putting up elite numbers.

This past season, Hicks had 37 total tackles, 16.5 tackles for loss, 10.5 sacks and an interception for the UTSA Roadrunners. It was an impressive campaign by the Florida native to say the least.

Hicks’ journey began at Hutchinson Community College, where he registered 42 total tackles, 23 tackles for loss, 14 sacks and two forced fumbles in a two-year span as a defensive end. Once he arrived at UTSA, it took him time to adjust to playing linebacker.

Fast forward to the present day, and Hicks is now fully capable of playing defensive end and linebacker. That makes him an intriguing prospect heading into the 2022 NFL Draft.

We caught up with Clarence Hicks to discuss his breakout season at UTSA, his path to the NFL Draft and much more.

The Spun: You started at the JUCO level before getting your chance at UTSA. Looking back at your journey, what has been the most challenging part about it?

Clarence Hicks: I would say going to JUCO in general. It’s a long process, you know? It’s basically like starting over high school but with a lot less time. You have to show what you can do really fast. Going through that process while being far away from home [Florida] is a lot different. It was one of those experiences were you just got to do what you got to do in order to make that next step.

The Spun: What would you say led to the breakout season you had in 2021?

CH: It was definitely overdue [laughs]. In JUCO, I played defensive end. When I finally got a lot of playing time, I had 14 sacks. So I was always a pass rusher. My first year at UTSA, I played linebacker. I did really well after a few months. I was finding my step as I made that transition to linebacker. I didn’t really know that much about the second level of the defense at first. It was like a new language to me. In my second year at UTSA, we got a whole new staff with a new scheme. It took a while for me to get used to it and learn how to play in space. I started pass rushing a lot during the 2020 season. I actually led Conference USA in quarterback pressure rate, but my coaches pointed out that I missed like 10+ sacks in 2020. I was playing out of control and had to settle down a little. I knew I was getting to the quarterback, but I wasn’t finishing the job. So I went back to the drawing board and figured it out for the 2021 season.

HICKS! Clarence with the interception with 43 seconds left.

The Spun: Do you have a favorite moment from this past season?

CH: Oh, for sure. The craziest play of my career has to be my interception at the end of the game against Western Kentucky. That’ll always be a crazy memory for me.

The Spun: Jeff Traylor has been really successful early on in his UTSA stint. Do you think he’s a coach who’ll be a hot commodity in a year or so?

CH: Definitely. Coach Traylor is a real coach. Everything he preaches about, he lives by it. He’s a great coach with a great supporting staff. Not only did he help us become great football players, he taught us how to be great fathers and great husbands. I can text Coach Traylor right now, and he’d text me back.

The Spun: Are there certain NFL players you like to study on film?

CH: During the 2020 season, I was looking at Isaiah Simmons a lot. I thought our games were similar because we’re both versatile. I mean, that’s what separated him from his draft class. I always knew I was athletic, but being in coverage and pass rushing is what separates me from other linebackers. This past season, I tried to study Micah Parsons. He had like 13 sacks this season. The crazy thing is he wasn’t someone I looked at while he was in college because getting after the quarterback wasn’t necessarily his speciality. But this season he took his game to another level.

The Spun: You’ve played defensive end and linebacker. Where do you see yourself in the NFL?

CH: I can definitely play both. This past season, I played both spots. There’s nothing that has been thrown my way that I can’t adjust to.

The Spun: What is one thing you’re hoping to show at your pro day?

The Spun: Is there a particular quarterback you’d like to get after?

CH: Honestly, I really wanted to face Tom Brady. He has always been my favorite player in the world. Unfortunately, he retired last week. So I’ll never get the chance to go up against the greatest quarterback ever.

The Spun: What is an NFL team getting in Clarence Hicks?

CH: Off the field, you’re getting somebody who will never get in trouble. I am looking to help the community, trying to make the world a better place. On the field, I’m a dynamic, versatile player who can contribute on special teams, third-down packages, second-down plays. I’m a player who can make an impact immediately.

Clarence Hicks gets the sack on Bailey Zappe! pic.twitter.com/dZijSXnJlf

With NFL defenses starting to value hybrid players like Hicks, he could carve out a role for himself as early as next season.

Hicks will have the chance to boost his stock at UTSA’s pro day.