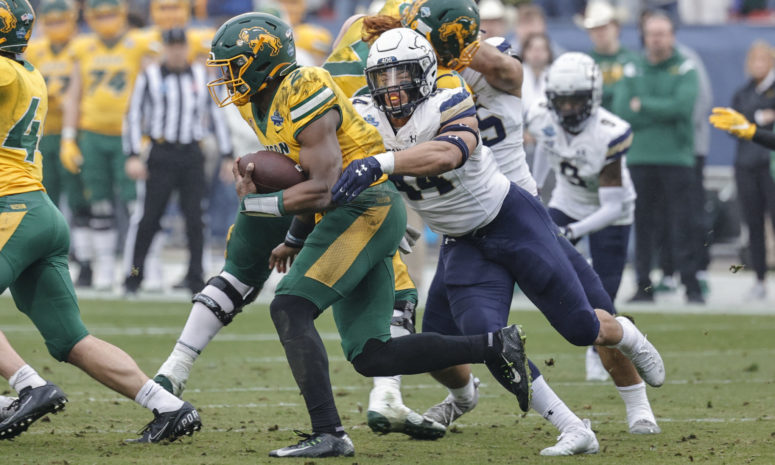 After spending his high school career as a receiver and linebacker, Daniel Hardy eventually moved over to defensive end. That turned out to be an excellent move for the Oregon native.

Hardy had a phenomenal final season at Montana State, racking up 77 total tackles, 24 tackles for loss, 16 sacks and two forced fumbles. His production earned him an invite to the NFLPA Collegiate Bowl, where he had the chance to showcase his skills in front of professional scouts and coaches.

With the NFL Draft just two months away, Hardy is hoping to show the world that he has what it takes to be a difference-maker at the next level.

We caught up with Daniel Hardy to discuss his career at Montana State, the Collegiate Bowl, what he’ll bring to an NFL team and much more.

The Spun: How was your experience at the NFLPA Collegiate Bowl?

The path to Pasadena is set 🌹

Join us in welcoming Daniel Hardy (@Dhardy44) out of @MSUBobcatsFB to this year’s #NFLPABowl. A standout for the Bobcats, Hardy recorded 16 sacks during his final year of college football.

The Spun: What are you going to remember most about your Montana State career?

DH: On the defensive line, part of our pregame routine was that we’d give each other our messages for the day on the 50-yard line. It was one of the closest groups I’ve ever been a part of. We had a very strong unit, and that’s probably because of how close we were. It was amazing to hear how much we cared for each other and our mindset before each game.

The Spun: You had 16 sacks in your final season of college football. What led to that success?

DH: I give a lot of credit to the coaching staff putting us in position to succeed. We were playing in a new a system, and I had the chance to play with my hand in the dirt for the first time. It was a change of position, but the same bread and butter that got me to where I am – just work my tail off and get better each day.

I’m a bobcat till the day I die. I wouldn’t have wanted to walk off that field with anyone else today. Thank you bobcat nation for an amazing season and career. #vim pic.twitter.com/e6A8iaObsV

The Spun: There’s a video going around that shows your forward hurdle hops. What are you hoping to show from an athletic standpoint at your pro day?

DH: That was in between lifts. Obviously, there’s a lower set and a higher set. I was clearing them pretty easy. Then, my trainer said let’s move them up a bit. We just kept pushing the limits. In terms of my pro day and stuff like that, I want to showcase my God-given gifts. I worked to get to this point, and I want to show scouts that I have the work ethic to match that talent.

The Spun: Do you feel like you’re flying under the radar?

DH: Honestly, that’s a difficult question. I feel like the attention I’ve received is a result of the work I’ve put in so far. I’m never a guy who is going to complain that people aren’t giving me enough attention. If I want that attention, I got to work even harder. As of right now, I’m very thankful for the opportunities I’ve had.

The Spun: There’s so much talk about the level of competition for “small schools.” Do you think those concerns are fair?

DH: Not necessarily. However, I think the level of competition we faced this year was very high. There are a lot of guys from the FCS who are in the NFL. At the end of the day, it’s kind of a gray area because at the end of the day football is football.

The Spun: Which pass rushers do you like to study on film?

DH: T.J. Watt is my go-to player to watch on film. I also watch Joey Bosa, Nick Bosa, Cam Jordan, Aaron Donald and guys like that. Those guys are freaks of nature.

Then, #MontanaSt DL Daniel Hardy had got after the quarterback quotes a bit this season, enters the game with 16 sacks and 23 tackles for loss. Looking forward to watching this Montana State defense against North Dakota State’s offense today.

The Spun: What is something you’ll be able to rely on as a rookie?

The Spun: What is an NFL team getting in Daniel Hardy?

DH: On the field, I’m a relentless worker. If you turn on the tape, I’m usually on top of the ball or somewhere near it. I’ve worked for a lot of things in life. I went to JUCO, earned a scholarship, then took my talents to Montana State. I’m willing to work. Off the field, I’m about helping out kids. They look up to us, and we’re role models to them. I’m always open and willing to doing stuff for the fans. A little guy named Carter has been a fan of mine since I got to Montana State. I was his favorite player and I have a special relationship with him and his family. I’m always for the fans.

Hardy wasn’t just a productive player at the collegiate level, he was a leader for Montana State’s program.

We’ll find out in the spring where Hardy’s pro career will begin.