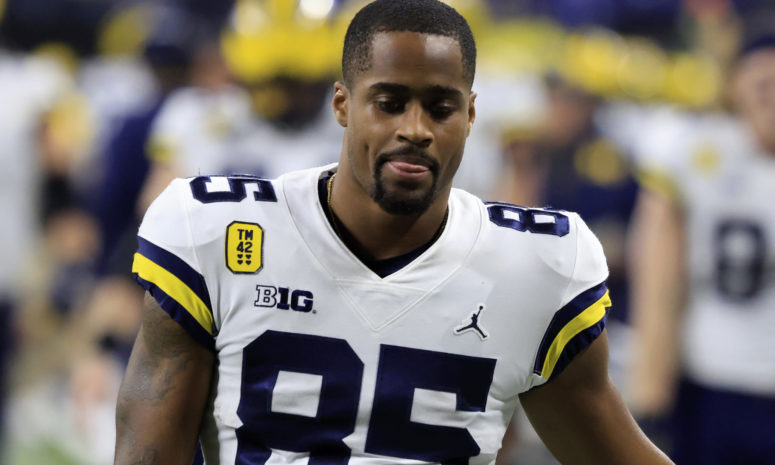 INDIANAPOLIS, INDIANA - DECEMBER 04: Daylen Baldwin #85 of the Michigan Wolverines on the field before the Big Ten Football Championship against the Iowa Hawkeyes at Lucas Oil Stadium on December 04, 2021 in Indianapolis, Indiana. (Photo by Justin Casterline/Getty Images)

Daylen Baldwin’s college football career consisted of stints at Morgan State, Jackson State and Michigan. The next stop on his football journey is the NFL.

After two years at Morgan State, Baldwin transferred to Jackson State. He spent two seasons with the Tigers before making his way over to the Wolverines.

Not only did Baldwin enjoy some individual success in Ann Arbor, he was a part of a Michigan squad that made it to the College Football Playoff.

Once the 2021 season came to a close, Baldwin declared for the 2022 NFL Draft. For the past month, the talented wideout has been trying to sharpen his game.

We caught up with Daylen Baldwin this week to discuss his path to the NFL Draft, his time at Michigan, what motivates him on a daily basis and much more.

The Spun: What has this draft process been like for you?

Daylen Baldwin: It’s been really nice. I went to the Tropical Bowl – went down there and showed what I can do. I talked to about 13 NFL teams – that was pretty cool. I’m now down in Arizona at Apex Performance preparing for my pro day. It’s been pretty nice so far.

DB: Trying to show every part of my game. I want to leave no stone unturned. I want coaches and scouts to see that I can dominate drills. I want to prove that I can run clean routes, my 40-time can be fast and that I can have consistent reps. That’s my main priority – showing how fast I am. I’m 6-foot-2, 220-pounds right now, and I know how fast I can run. I want to show that there aren’t many guys like me.

The Spun: It was a great run this past season for Michigan. Did you guys feel vindicated after your win over Ohio State?

DB: We knew we were going to beat Ohio State. We knew they weren’t the same guys like they were in the past. The only people who were surprised were the ones who weren’t in our facility. We knew they didn’t have the talent they’ve had in previous years. We just knew that we needed to stick together and run the ball. Sometimes, as a receiver, it’s hard knowing you’ll run the ball all game. But we blocked all day and made it happen.

The Spun: Jim Harbaugh has been linked to the NFL a lot the past few weeks. Are you surprised by that?

DB: He’s a great coach and he’s a very consistent person who constantly knows how to get the best out of his players. That’s just who he is. So I’m not surprised that NFL teams are interested in him

〽️🏈💛💙JJ to transfer Daylen Baldwin on the schoolyard, cross field Hail Mary! Glad to see those young men have a moment! #GoBlue pic.twitter.com/jUkEjyU5Nu

The Spun: Josh Gattis had so much success this past season. Do you think he’ll be a head coach soon?

DB: I think he should be, honestly. I think he can be a head coach calling plays somewhere. I learned a lot from him. I called him the other day to thank him because I’m going through NFL playbacks right now and it’s a cakewalk because of how similar the plays are to the ones we ran at Michigan. It helps so much knowing that his system translates well to the next level.

The Spun: Who are some receivers you like to study?

DB: I got a couple of guys. I love to study Davante Adams. Watching him play, I love seeing how he uses his technique to get open. He doesn’t rely on his physical ability to create separation from cornerbacks. I also like watching Stefon Diggs. An older player I like to watch a lot is Sterling Sharpe. I’m a student of the game, so I can go back and talk about a bunch of players. Sharpe is one player who had success against Deion Sanders. He didn’t last long in the league because of health, but he had great numbers when he was healthy.

The Spun: What is an NFL team getting in Daylen Baldwin?

The Spun: I got to ask about your former school, Jackson State. How important is it that HBCUs are now landing marquee recruits, like Jackson State with Travis Hunter?

DB: It’s super important. A lot of those schools are underfunded. They don’t have a lot of resources in the classroom or on the field. Getting that notoriety now is huge for HBCUs. One of my guys, CJ Holmes, got invited to the NFLPA Collegiate Bowl. It shows that you can make it out of an HBCU and go pro. People are starting to see it, especially with Hue Jackson and Deion Sanders coaching. It’s a whole movement that Coach Prime has created.

The Spun: What drives Daylen Baldwin to be the best version of himself?

DB: That I got people depending on me. My parents tell me all the time that if I don’t do anything else they’re still proud of me because I got this far. But my parents went through a lot raising me and my brothers. I want to be able to make sure they never have to work another day again. The fastest way to get that opportunity is to go out there and be the best version of myself. I’m not settling for a couple of years in the league. I’ve been dreaming about this since I was 7 years old. I’ve been watching the NFL with my father every Sunday since I was that age. That’s how my family has always been. I want to show them that I am who I say I am. I also have little cousins that I want to be able to help when it comes to them achieving their own dreams. I’m a family-oriented person, and I want to be able to support them.

Michigan WR Daylen Baldwin was another prospect that had a very productive Day 1 of practice. He spent time at both Morgan St. (2017-2018) and Jackson State (2019-2020) prior to transferring to the Wolverines last season. https://t.co/7X2l3UodiI

In his only season at Michigan, Baldwin had 17 catches for 256 yards and two touchdowns. He was awfully productive in his final year at Jackson State, hauling in 25 passes for 520 yards and seven scores.

Baldwin will have the chance to boost his stock at Michigan’s pro day.