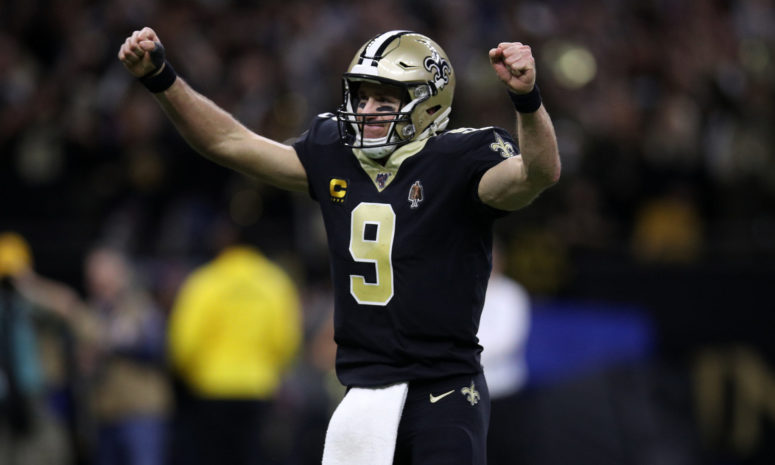 NEW ORLEANS, LOUISIANA - DECEMBER 16: Quarterback Drew Brees #9 of the New Orleans Saints celebrates his 540th career touchdown pass, for the most in league history, in the third quarter of the game against the Indianapolis Colts at Mercedes Benz Superdome on December 16, 2019 in New Orleans, Louisiana. (Photo by Chris Graythen/Getty Images)

On Dec. 31, 2005, Drew Brees suffered what some doctors thought was a career-ending shoulder injury. That injury led him to the New Orleans Saints, though, and the rest is history.

Brees finished his career as one of the prolific passers in NFL history, throwing for 80,358 yards and 571 touchdowns. He’s also widely considered the most accurate quarterback to ever play the game.

Following the 2020 season, Brees announced that he was officially retiring from the NFL. Although he’s no longer suiting up for the Saints on Sundays, he remains close to the game due to his current gig with NBC Sports.

NBC Sports signed Brees as a studio analyst for Football Night in America. Additionally, he calls Notre Dame football games for the network alongside Mike Tirico.

We sat down with Drew Brees to discuss his first year as a broadcaster, his thoughts on the Saints’ offense through five games, his partnership with Quaker Oats and much more.

This interview with Drew Brees is presented by the Quaker Good Call Challenge.

The Spun: Tell us about what you’re doing with Quaker. What is the Quaker Good Call Challenge?

Drew Brees: I’m partnering with Quaker, the official oatmeal sponsor of the NFL, to inspire people to help tackle hunger and support Feeding America. 38 million people in America are facing hunger, and with the holiday season coming up, Quaker is committed to donating $125,000 to Feeding America, which is awesome. The call to action here is the Quaker Good Call Challenge, which we’re encouraging everyone to participate in from now until December 31. Find an empty canister – maybe an empty Quaker canister from the pantry – and turn it into a bank. Run around the house, collect all the loose change, check all the cushions, and give whatever you’re willing to donate. Find your local Coinstar kiosk, which you can find at a lot of local grocery stores and other places, and pick the Feeding America option to donate. All that money will go to help feed people here during the holiday season. We’re also asking that people would go on social media, show us your pictures, and call that out with #QuakerGoodCall and also @Quaker.

The Spun: It’s been roughly seven months since you retired. Do you still have that desire to play football? What’s the first year away from the field been like?

DB: Listen, I love the game and I miss the game. I try to get my fill from broadcasting, doing in-studio work, coaching my kids and playing ball with them. It’s hard to replace game day; it’s hard to replace the locker room. I talk to those guys a lot. I’m obviously rooting hard for the Saints every week. But it was time. I played 20 years of professional football. This was a decision that was made over the course of a couple of years and not just spontaneously. It was the right time.

The Spun: What’s the most challenging part of the broadcasting industry?

DB: It’s a different skillset, especially broadcasting from the stadium and in the studio. To learn both of those at the same time running parallel to each other is hard because it’s different. There are different skillsets, different muscles, and you need to flip the mindset and put that hat on. It’s been challenging but it’s also been a lot of fun. I feel like I get more comfortable and more confident each and every time out.

The Spun: What have been some good things and bad things about the Saints’ passing attack under Jameis Winston?

DB: I think the team is still in a position where they’re finding what their bread and butter is. I think one of the strengths of the offense is the offensive line. It’s a group that has been together for a while, and I know they’ve been banged up a little bit, but I feel like they’ve played well this year. Obviously, Alvin Kamara is the bell cow and the guy you want to give the ball to as much as possible. He has played very well thus far. When it comes to the receiver position, Mike Thomas and Tre’Quan Smith are out. So you have a lot of young receivers having to step into roles. It takes time to build that chemistry and build that rapport, so you can see that still developing. There have been some big plays that you’ll see. Jameis, obviously, has a big arm and one of his great strengths is to push the ball down the field. I know Sean Payton loves that and loves to approach the game with an aggressive mentality. I think a lot of the way you call a game and play a game is based on what’s happening  on the other side of the ball, and I think the defense has been outstanding this year. They [the Saints offense] haven’t been in a position where they need to take unnecessary chances. The defense has done a great job of not just stopping people, but taking the ball away. I think this team is still finding what that rhythm is going to be on offense, especially in the passing game. That takes time, especially when you have new faces at wide receiver and quarterback.

"I don't see the rhythm, tempo passing game that compliments the run game."

The Spun: Do you think the return of Michael Thomas would help this potential identity crisis?

DB: Well, I wouldn’t call it an identity crisis. Mike, obviously, is a great weapon. He’s one of the best receivers in the league, he’s a matchup problem, he’s a guy that defenses have to account for, and if he’s in a one-on-one situation, you’ll feel great about that. I think he’ll add a different element [to the Saints’ offense]. Now, where is he coming off the injury? You don’t just snap your fingers and you’re automatically where you were two years ago. Mike, unfortunately, had to deal with that injury situation for almost all of last year. I know from being with him that he didn’t feel like he was at 100 percent. He didn’t feel like he was able to accelerate or explode like he’s accustomed to. You want him to be as healthy as possible. He’s always playing through injuries. There’s not a tougher guy at receiver than him. At the same time, though, you want him to be as healthy as possible so he can be as effective as possible.

The Spun: Which team was Drew Brees’ favorite to beat?

The Spun: You were confident in Mac Jones leading up to the draft. If you had to assess the rookie class, would you say he has been the most impressive?

DB: You know, I’m a big Mac Jones fan. Prior to the season, I thought he was the most NFL-ready rookie quarterback, and I still feel that way. He has done some good things and he has also done some things where you see he’s still learning the position. I think the Patriots are a better team than their record shows, but you can’t help but say ‘Gosh, they’re 0-4 at home. That’s so unlike the Patriots.’

I think Trevor Lawrence has had growing pains up until this point, but these last two games I’ve seen him turn the corner as far as his growth and development goes. Trey Lance is still getting the opportunity and we’ll see where that continues this week – I know they’re coming off a bye week and Jimmy G is getting healthy. Zach Wilson is extremely talented. He needs some more pieces around him, I think, but he has a really good coach. And then Justin Fields, I think he has tremendous upside and can make some plays outside of the pocket. He can also throw the ball down the field from the pocket. I think it’s one of those offenses where you have to structure it for him, you know? The good thing is he has a good run game and a good defense. At this point, those are a young quarterback’s best friends. All these guys have the ability to be difference-makers, but only time will tell over the next couple of years.

Drew Brees: Bills are best team in the NFL, 'and it's not even close' https://t.co/96PAgWQej5

DB: I still think they’re the team to beat in the AFC. I think Kansas City will have it figured out by the end of the year. If Tennessee can run the ball with Derrick Henry like they did on Monday night, then look out. I know the Browns are going through some tough times, which is unfortunate since they were a preseason favorite in my mind. There’s something about the Bills, though. I just feel like they’re ready to take that next step.

As for the NFC, I think Arizona looks really stout. And listen, they’ve played some really good teams thus far. If they can stay healthy, they have a ton of weapons on offense and an outstanding defense. We’ll see what happens in that loaded division [the NFC West]. Obviously, Green Bay looks good. We’ll see who can challenge them. Of course, Tampa [also looks good]. But yeah, there are some good teams out there, that’s for sure.

It’ll be tough for Brees’ broadcasting career to mirror what he accomplished on the football field. After all, he’s going to go down as one of the best quarterbacks of all time.

What we do know, however, is that Drew Brees is embracing this next chapter of his life.