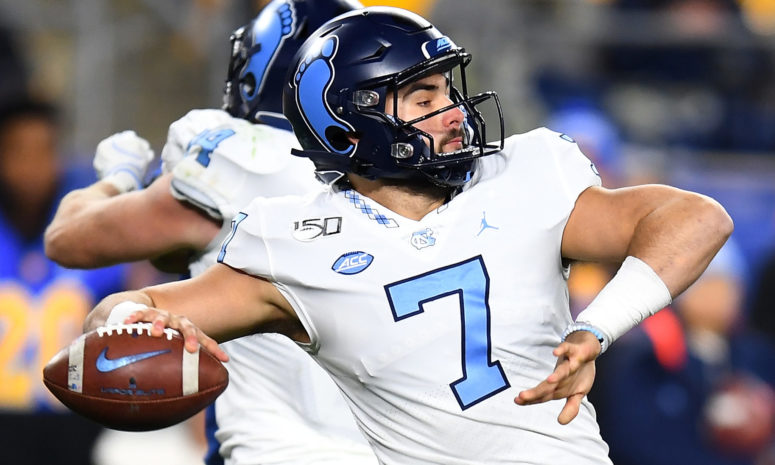 PITTSBURGH, PA - NOVEMBER 14: Sam Howell #7 of the North Carolina Tar Heels throws a pass during the second quarter against the Pittsburgh Panthers at Heinz Field on November 14, 2019 in Pittsburgh, Pennsylvania. (Photo by Joe Sargent/Getty Images)

One of the yearly traditions of the NFL scouting combine is teams asking prospects strange questions or having them perform offbeat tasks.

The Philadelphia Eagles had UNC quarterback Sam Howell do the latter during his interview with team officials. At the combine this morning, Howell revealed that the Eagles had him shoot mini basketballs on a miniature hoop during their meeting.

Howell joked that because he only hit two of five attempts, he slid down Philly’s draft board.

UNC Quarterback Sam Howell says in his NFL Combine interview with the Philadelphia Eagles they had him shoot mini basketballs on a mini hoop. He only made 2 of 5.

“I only made like 2 of 5, so I’m probably not high on their board right now” 😂 😂 pic.twitter.com/7q3oyexQbg

What does something like this tell teams? Who knows, maybe the Eagles just wanted to have a little fun with Howell.

In a class that appears to lack a sure thing at quarterback, Howell has a chance to break into the first round discussion. Philadelphia has three first-round picks (15th, 16th, 19th overall), so maybe they will consider the Tar Heel star with one of them.

As long as they feel more confident in his passing ability than his ability to shoot miniature basketballs accurately.