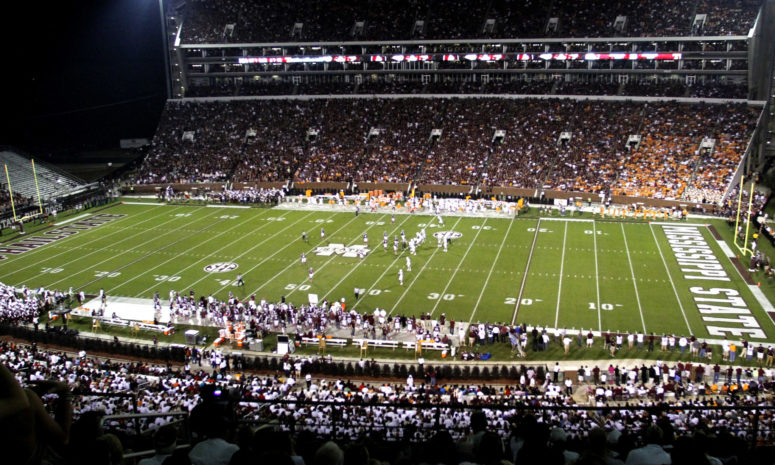 STARKVILLE, MS - OCTOBER 13: A general view of Davis Wade Stadium during a game between the Tennessee Volunteers and Mississippi State Bulldogs on October 13, 2012 in Starkville, Mississippi. (Photo by Butch Dill/Getty Images)

On Tuesday night, the football world received some terrible news when a former player passed away.

Harvey Hull, a former All-American linebacker for Mississippi State, passed away this week, the school confirmed in a statement. He was 66 years old.

“The Mississippi State University family mourns the loss of Harvey Hull, who passed away Friday [Feb. 25] in Waynesboro, Mississippi,” the statement read. “Hull was one of the all-time greats in Bulldog football history. He was 66.”

One of the all-time greats in Bulldog history, Hull was an All-American linebacker and three-time All-SEC performer from 1973-76.

Our thoughts and prayers are with him and his family.https://t.co/8QD58f42JF

Here’s more about Hull’s career with the Bulldogs, via the team’s website:

A native of Walnut Grove, Mississippi, Hull lettered four years at MSU as a linebacker from 1973-76. Earning second-team All American honors in 1976, Hull was also an All-SEC performer in 1974, 1975 and 1976. As a freshman, Hull helped the Bulldogs to a 1974 Sun Bowl victory over North Carolina.

Hull, who wore No. 99, recorded 454 career tackles which still ranks second all-time in school history. Following his collegiate career, he was selected to play in the 1976 North-South Shrine Game and the 1977 East-West Shrine Classic.

Following Hull’s terrific college football career, he was drafted in the 10th round of the 1977 NFL Draft by the Houston Oilers. Unfortunately, his professional career was cut short when he suffered a catastrophic knee injury in a preseason game against the New Orleans Saints.

He eventually returned to Mississippi State and earned his degree in physical education. Not long later, he began working as assistant coach for the Bulldogs.

Our thoughts are with the Hull family.