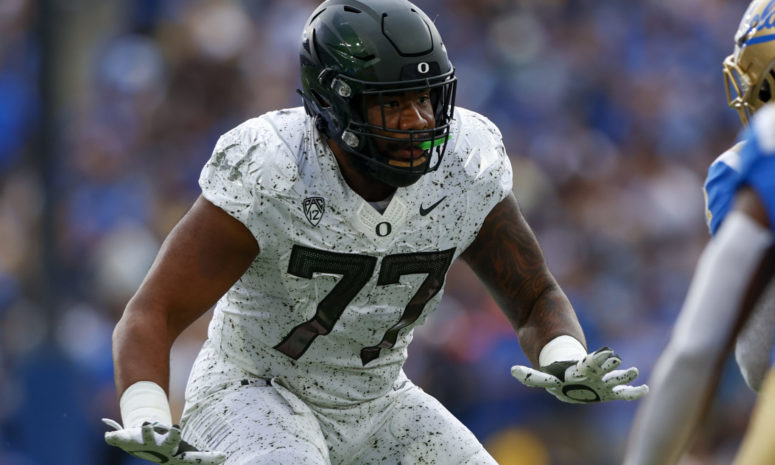 PASADENA, CA - OCTOBER 23: Oregon Ducks offensive lineman George Moore (77) during a college football game between the Oregon Ducks and the UCLA Bruins on October 23, 2021, at the Rose Bowl in Pasadena, CA. (Photo by Jordon Kelly/Icon Sportswire via Getty Images)

After spending several years at Oregon, offensive tackle George Moore is ready to show that he has what it takes to make an impact in the NFL.

Earlier this month, Moore put his skills on display at the Shrine Bowl in Las Vegas. It was a golden opportunity for him to show what he brings to a team’s offensive line.

While there’s still some work left to do, Moore has received credit for his ability to block in space.

We caught up with George Moore to discuss his time at the Shrine Bowl, his career at Oregon, Mario Cristobal’s departure and much more.

George Moore: I want to give a shoutout to the Shrine Bowl and the guys down there that put together the event. It was a great opportunity for me to showcase my talent in front of NFL teams. A couple of former teammates told me how the Shrine Bowl operates, but you never really know until you go out there and experience it for yourself. I got to sit down with actual scouts and compete with some really good players.

Blessed with the opportunity and meeting a furry friend along the way ❤️ @ShrineBowl https://t.co/wvEi3P8A36

The Spun: Looking back at your Oregon career, do you have a favorite moment?

GM: I just want to say our 2019 team with Justin Herbert and all those guys was a special experience. We had such a strong bond. Winning a Rose Bowl and a Pac-12 title was one of the best feelings ever. We worked so hard together, so to see it pay off was just the best feeling in the world. You can’t buy that type of feeling. I would say that 2019 team was just so special to me. Our 2020 team will also hold a special place in my heart.

The Spun: You mentioned Justin Herbert. A lot of people claim they didn’t see elite talent at Oregon. What do you make of his current success?

GM: I’m not surprised at all. We saw it every single day at practice. Herbert is a special talent. A lot of people would say they had their doubts about him, but I had the chance to see him carry himself as a professional before every game and practice. Even though he had a big name, he was so humble and always working hard. I knew he’d be a star in the NFL, and I’m not surprised about the publicity he’s getting now.

The Spun: Have you been able to receive any advice from Penei Sewell?

GM: Of course. I’m always talking to Penei and learning about the NFL. He tells me what to expect from the next level, which means the defensive players are faster, stronger and bigger. It’s a big jump from college to the pros. I need to make sure I have a strong enough mindset to compete in the NFL. And honestly, at the end of the day, you wouldn’t be in the NFL if a team didn’t believe you could get the job done.

Intrigued by George Moore out of Oregon. Listed at 6-6 and 324 pounds. Was the number one ranked JUCO offensive tackle at the College of San Mataeo. Chose Oregon over a plethora of schools. Has experience at LT, RT and LG.

Good pull from here despite the QB keeping the ball. https://t.co/8btRcb3rWE pic.twitter.com/FKgK5ZrTiv

The Spun: What was it like going head-to-head with Kayvon Thibodeaux in practice every week?

GM: Coach Cristobal is a big believer in the whole “iron sharpens iron” mentality. Our front seven was amazing with Kayvon Thibodeaux and several others. All those guys are amazing football players, have high IQs, and made practices tough. We would go head-to-head every single day because we knew that’s what we needed to do to give ourself an opportunity on Saturdays. We knew that we’d need to be physical throughout the week to make sure it helps us have success during games.

The Spun: You were able to learn Mario Cristobal for the past few years. Were you a bit disappointed when you heard he was leaving for Miami?

GM: I was still there as he was making that transition, but I could never be mad at Coach Cristobal. I can never be mad at him. He changed that whole program in three and a half years. He did what he needed to do, and I tip my cap to him for being such a great coach. He pushed us to our limits because he wanted us to be the best versions of ourselves. When we found out he had that opportunity in Miami, we weren’t upset about it because he built our program from the ground back up. So when he leaves, that culture will still be intact at Oregon because of him.

The Spun: Which offensive linemen do you like to study?

GM: Tyron Smith is a guy that I love to watch. Shoot, when Penei was here I was watching him because he was doing stuff that no one else at the college level was doing. Trent Williams is another player who I love to study. I’m just trying to be a sponge and soak up as much knowledge as possible because they’re at a place where I want to get.

The Spun: What is your mindset while you’re blocking in space?

The Spun: What is an NFL team getting in George Moore?

GM: I would say a team is getting a hard-working guy that continues to learn. I’m a player who likes to work behind closed doors. I don’t let the spotlight change my approach. I’m also a person who loves to give back. I’ll be working in the community and making sure I help out those who need it.

Moore has the ideal size to make the jump from college to the pros. He’ll have the chance to boost his stock at Oregon’s pro day later this year.