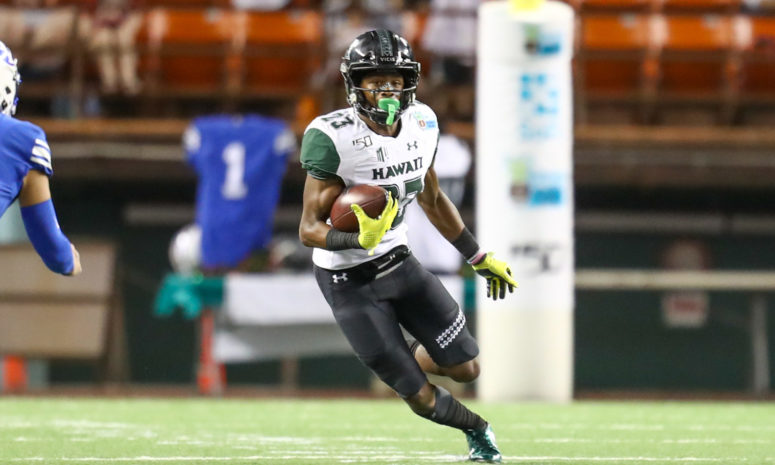 HONOLULU, HI - DECEMBER 24: Jared Smart #23 of the Hawaii Rainbow Warriors runs the ball during the fourth quarter of the Hawai'i Bowl against the BYU Cougars at Aloha Stadium on December 24, 2019 in Honolulu, Hawaii. (Photo by Darryl Oumi/Getty Images)

It wasn’t an easy journey to get to this point, but Hawaii wide receiver Jared Smart is just two months away from potentially ending up on an NFL roster.

Smart, an All-Mountain West performer during his time at Hawaii, spent two years at Laney College in Oakland before joining a Division I program. He wasted no time making an impact on his new team, hauling in 87 passes for 1,129 yards and five touchdowns in his first season with the Rainbow Warriors.

Once his college career came to a close, Smart received an invite to the Hula Bowl. That event provided him the chance to show NFL personnel what he could bring to their respective team this fall.

We caught up with Jared Smart to discuss his Hawaii career, preparation for the NFL Draft and much more.

The Spun: How was the Hula Bowl experience for you?

Jared Smart: It was a really good experience for me. I was able to have a great week of practice, a solid game, and I felt like I was able to help out my stock.

The Spun: What are you going to remember most about your Hawaii career?

JS: I would say the first year I had with the team was so fun. It was definitely a good start to my career at Hawaii, and I’m very grateful for that.

The Spun: You had an incredible 2019 season, finishing the year with over 1,100 receiving yards. For those wondering why the production didn’t match that in 2020 and 2021, what would say?

JS: I would say that situations aren’t always the same each season. I just didn’t have as many opportunities to showcase my skills those seasons. But I’m happy I’ll have opportunities in the future to showcase what I can do as a player.

The Spun: There has been a lot of talk about Todd Graham and him not being able to understand the team’s culture. Do you think those reports are fair?

JS: Throughout my time there, personally, I was able to stay the course and piggyback off the foundation I had during my 2019 year. I’m excited for the future of the program with the whole brotherhood they got going on right now.

The Spun: Which wide receivers do you like to study on film?

JS: Doug Baldwin and T.Y. Hilton are my top two. With Doug, his playing style and athleticism reminds me of mine. Nothing too flashy, a possession receiver but can make big-time plays. That’s why I’ve always tried to emulate my game after his.

With Jared Smart being the top returning WR at Hawaii, he’s going to put up NUMBERS. He’s a clean route runner that does a lot of YAC damage. pic.twitter.com/wfLpr9uxfq

The Spun: What would you say is your best quality?

JS: I would say my comfortability in situations. Being able to get through the ups and downs is important. I can be comfortable through it all and be a shoulder to lean on for other players.

The Spun: Has it hit you that the NFL Draft is just a few months away?

JS: Not as much as I think it will in a month or two. After the Hula Bowl, though, I’d see scouts and I’d realize that it’s picking up. I’m not too worried about it right now. I just have to keep working hard.

JS: At my pro day, I want to run a good 40-time for my size. I also want to catch the ball easily and run strong routes during position drills.

The Spun: What is an NFL team getting in Jared Smart?

JS: It’s definitely what the film shows. I’m a passionate guy who is going to show his love for the game each and every down.

On Hawaii’s first drive of the game, Jared Smart made a beautiful toe-tapping catch, moving the chains to set up the game’s first score! Catch more highlights on @TheRolovichShow at 10:35 p.m. on KGMB! pic.twitter.com/oihawU6fMw

Smart could boost his draft stock with a strong showing at his pro day later this year.