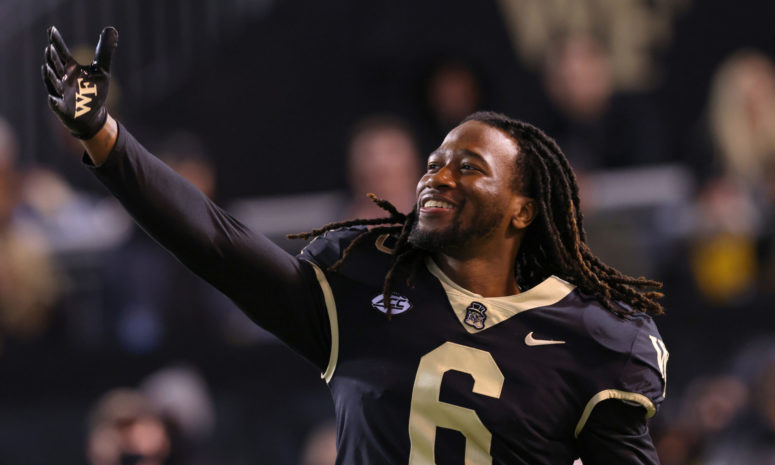 Wake Forest defensive back Ja’Sir Taylor has learned an awful lot over the past few years, developing into a player who excels in zone coverage. Now, he’s ready to prove he can make a difference in the NFL.

Taylor had an impressive run at the collegiate level, racking up 184 total tackles, 24 pass breakups six interceptions and three fumble recoveries. He proved that he can also return kickoffs, finishing the 2021 season with 210 return yards and a touchdown.

After finishing his Wake Forest career on a high note, Taylor went to the Shrine Bowl in Las Vegas to showcase his skillset. Clearly, he was impressive enough to earn All Shrine Bowl Practice Team honors.

We caught up with Ja’Sir Taylor to discuss his experience at the Shrine Bowl, career at Wake Forest, his fondness for Wordle and much more.

Ja’Sir Taylor: The Shrine Bowl was a great event put together by Eric Galko. He got a bunch of scouts out there. It was a great opportunity for me to showcase my skills. I wanted to play nickel corner and take every rep I can. The practices went well, I made a couple of plays during one-on-one drills and seven-on-seven drills. It was fun competing against those guys.

The Spun: This past season was a special one for Wake Forest. What was your favorite moment from it?

JT: I would say beating Boston College to secure the ACC from our side of the division. Winning that game was one my favorite moments from my time in college.

The Spun: Who are some players you loved going up against during your college career?

JT: There are a lot of big teams in the ACC, like Clemson and Florida State. I would circle games like that on my schedule. Going up against Pitt in the ACC Championship was really fun. I also loved playing against North Carolina. Two years ago, they had Dazz Newsome and Dyami Brown. This year, they had Josh Downs. It’s fun going up against players like that because it’s a great test.

The Spun: How were your battles in practice with Sam Hartman?

JT: Sam is a very smart quarterback. That’s one thing I learned quickly in practice. He doesn’t make many mistakes, so it’s hard to make a play on him. He’s a quick learner and a great leader. We’ll chop it up off the field sometimes. He gives me pointers that I can apply to my game.

The Spun: I’ve noticed you’re a big fan of Wordle. With that said, what’s one word that perfectly describes Ja’Sir Taylor?

JT: I would say versatile. I’m a big Wordle fan. I’m on a streak ever since I started. I don’t tweet them out anymore because people are probably tired of it. But I have a competition going on with one of my former teammates.

The Spun: Which defensive backs do you like to watch?

JT: Most of the time, I like to watch Jessie Bates. I was a teammate of his at Wake Forest. Seeing him excel at the next level is awesome, but I’m always wondering how he does it. I know how hard he studies the game and how much preparation he puts in. I also watch Kenny Moore in the slot. Jalen Ramey is also a beast.

The Spun: Have you received any advice about the NFL Draft process from former teammates?

JT: Definitely. I speak to Jessie here and there. Recently, I’ve been talking to Carlos Basham. He tells me that it’s a business. You need to put your feelings to the side and work extremely hard. I adopted that mindset heading into the Shrine Bowl. I don’t need to make everyone fall in love with me, I just need one team to.

The Spun: We’ve seen you return kicks in the past. Is special teams something you’d want to play in the NFL?

JT: Most definitely. I would love to get back there on kick returns and help the team win. I know special teams is the first way to earn a role on defense. I am definitely willing to play on special teams.

The Spun: What are you hoping to show scouts at your pro day?

JT: My speed. I’m not sure why, but there’s a question mark surrounding my speed. So I want to run a strong 40-yard dash. I also want to be fluid during the position drills. I need to show my footwork.

The Spun: What is an NFL team getting in Ja’Sir Taylor?

JT: On the field, you’re getting a guy who is going to work hard every single day. I’m going to come to the facility early, be prepared for meetings, and do my job to the best of my ability. I’ll help the team on special teams and work my way up to a role on defense. Off the field, I’ll help out my community. I won’t bring any negative attention to the team.

Taylor’s willingness to play special teams makes him an even more appealing prospect, and he could boost his stock at Wake Forest’s pro day.

We’ll find out where Taylor’s NFL journey will begin in the spring.