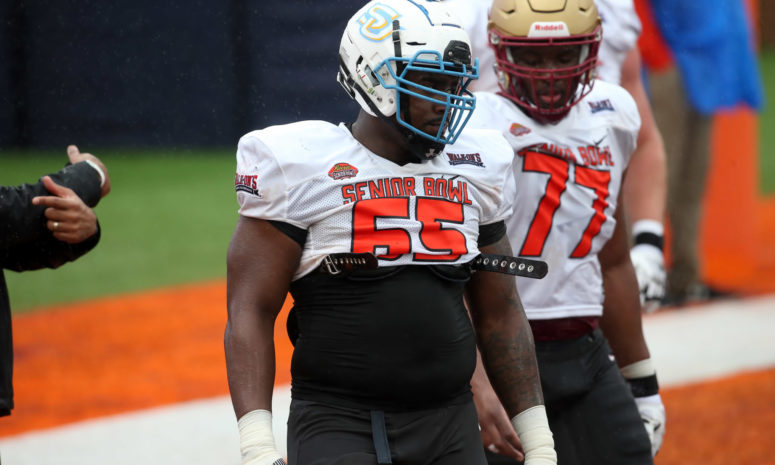 Ja’Tyre Carter might be considered a “small school talent,” but he certainly has NFL potential.

After a strong 2021 season at Southern University, Carter announced that he’s declaring for the 2022 NFL Draft. Shortly after that announcement, he earned an invitation to the Senior Bowl.

Though he was going up against elite competition, Carter looked like a player who belonged on the big stage. Throughout the week in Mobile, Alabama, the talented offensive lineman handled his own in individual and team drills.

We caught up with Ja’Tyre Carter to discuss his time at the Senior Bowl, career at Southern University, future in the NFL and much more.

Ja’Tyre Carter: It was kind of new to me. It was a great experience, great opportunity to go up against high level competition and interview with NFL teams.

Chasing my dream only thing that been on my mind🥷🏾🦅 @seniorbowl pic.twitter.com/lOgaBaMmdq

The Spun: Do you think you showed enough to end the whole debate about whether or not you can compete against a higher level of competition?

JC: Of course. I showed I can hold my own against any level of competition because at the end of the day football is football.

The Spun: Do you feel like you made strong connections with NFL teams?

JC: It was good. I talked to a few teams. I feel like everyone there liked me. When the draft comes around, I’ll find out who was really digging me and wants me on their team.

The Spun: What will you miss most about your time in college?

JC: I would say playing with my brothers every day. Competing with them was great. I miss the locker room, I’m not going to lie.

The Spun: What was it like getting the invitation to the NFL Combine?

JC: It means a lot. That’s a big thing. Just getting invited to the Combine from an HBCU is amazing. That just doesn’t happen often. You’ll rarely seen an HBCU offensive lineman go to the NFL Combine.

The Spun: Do you think HCBUs are starting to get the attention they deserve?

JC: HCBUs are going up this year. They’re definitely getting more four-star and five-star recruits. HBCUs are heading in the right direction, and I feel like you’ll start to see more and more players head to the NFL Combine because of it.

The Spun: What would you say is your greatest strength?

JC: My pass protection is my strength. I’m going to show that I can compete against speed rushers and power rushers.

The Spun: I’ve noticed you’re a fan of Marvel. Which MCU film is your favorite?

JC: My favorite Marvel movie? Man, that’s tough. I’d have to go with either the old Spider-Man 3 or the new one that just came out [No Way Home].

Good look at Southern’s Ja’Tyre Carter out at the #SeniorBowl today. pic.twitter.com/jrpoo1i1wm

The Spun: Which offensive linemen do you study on film?

JC: Tytus Howard, Lane Johnson, Jason Kelce and Tyron Smith are some offensive linemen I like to watch.

The Spun: What’s one part of your game that you want to unlock in the NFL?

JC: When I get to the next level, my run game is going to be pretty scary.

The Spun: What’s your mindset when you’re blocking in space?

JC: Just run them over as you’re going by.

The Spun: What is an NFL team getting in JaTyre Carter?

JC: They’ll be getting a great person, great teammate, a hard worker, and a person who’ll do everything they can to win.

Next up for Carter is the NFL Combine. It’s a great opportunity for him to show his athleticism in front of personnel for all 32 NFL teams.

If all goes well, Carter could boost his draft stock this March.