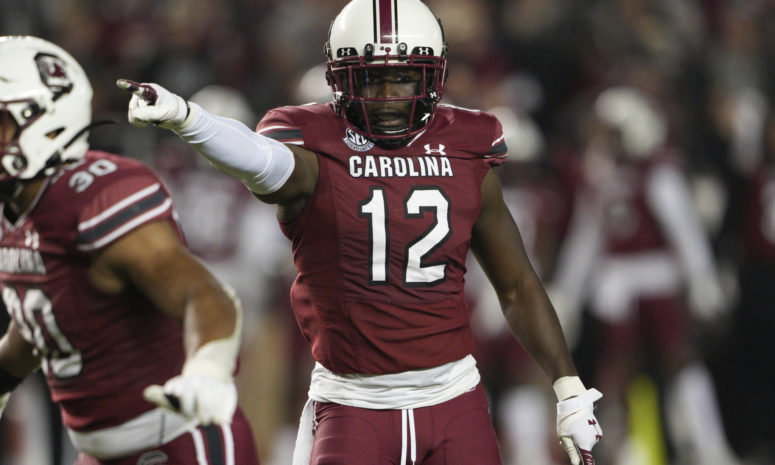 It was a long journey to get to this point, but Jaylan Foster is about to reach his destination. In just two months, the All-American defensive back should find himself on an NFL roster.

Foster started his college football career at Gardner-Webb. He was named Big South Conference Freshman of the Year, leading the team with five interceptions. After the 2016 season, he transferred to South Carolina.

At first, Foster spent time on South Carolina’s scout team as a walk-on. In 2020, he was finally placed on scholarship. He proved his value to the Gamecocks by putting together two impressive seasons at safety.

Foster wasn’t invited to the NFL Combine, but he’s out to prove that he has what it takes to be a difference-maker at the next level.

We caught up with Jaylan Foster to discuss his South Carolina career, playing for Shane Beamer, what motivates him and much more.

The Spun: You went from playing at Gardner-Webb to becoming an All-American in the SEC. Can you just explain to me, if possible, how much this journey means to you?

Jaylan Foster: This journey has been beautiful. It’s been surreal because I couldn’t imagine this in a thousand years. I’m just really excited and happy that it turned out this way.

The Spun: What kept you going throughout the process?

JF: For me, it’s trying to prove that I can play at the highest level. A lot of people still don’t believe that I’m capable of playing at this level, and I just want to prove everyone wrong.

The Spun: Speaking of this journey, you’re just two months away from the NFL Draft. Has that hit you yet?

JF: Some days, it does. Others, it doesn’t. It feels like just yesterday I was a kid going through the recruiting process. And now, my dream is right there. It’s just so surreal.

The Spun: What was your favorite moment from your final season at South Carolina?

JF: Honestly, I would just say the whole season. Just playing under Coach Beamer and the rest of the staff was so fun. They made every single day positive, and that’s what I was looking for in my last season. I wanted coaches to bring back the fun that I had when I was a little kid. That’s what I enjoyed so much about this season.

The Spun: What do you think the future has in store for the Gamecocks under Shane Beamer?

JF: I’m going to be honest, I think the sky isn’t even the limit for them. They can go wherever they want to go under Coach Beamer. He’s positive every day, he has great energy every day. Every player on the team feeds off his energy, and I think that’s what you need to be a head coach at this level. I can’t wait to see what he does next year.

Thank you God for all the blessings you’ve given me and the ones that’s on the way 🙏🏽 pic.twitter.com/LqJP8kWTi2

The Spun: What will you miss most about South Carolina?

JF: The locker room, for sure. I was just getting into that leadership role at South Carolina, and I made a lot of relationships with the guys in the locker room. I’m also going to miss the fans. They come out for every game and give us their full support. I’m going to miss that.

The Spun: Which defensive backs do you like to study on film?

Jaylan Foster explodes off the edge and gets the strip sack pic.twitter.com/zqKOSoau9B

The Spun: What mentality do you need to have as a defensive back?

JF: I think you need to be completive every play. If someone gets behind you, it’s a touchdown. Every mistake is magnetized. You need to also be aggressive and trust your reads.

The Spun: You were snubbed from the NFL Combine. Will you use that as motivation?

JF: It just adds more fuel to the fire. Like I said, I’ve always been that underdog and have had to work my way to the top. I wasn’t surprised. I just know that when pro day comes around I need to show all those scouts what they missed at the NFL Combine.

The Spun: What is an NFL team getting in Jaylan Foster?

JF: First, you’re getting a guy who believes in Christ. I give him the glory because I couldn’t do it without him. On the field, I’m going to leave it all out there every time I go out there. I love to compete against the best of the best. When the time comes for me to make a play, I’m going to make a play.

We’re excited and honored to welcome @ccam42, @Nick_Cross26, @AFAYAD3, and @jaylanfoster15 as members of our 2022 Draft Class on defense! Welcome to the SSE Family! #NFL #NFLDraft (1/2) pic.twitter.com/uLVQo8oGHU

“Jaylan Foster is a tremendous athlete on the field and a person that his peers in the locker room look up to,” Selwyn Roberts of Steinberg Sports said. “His football IQ and his ability to make plays and cause turnovers on the field is unmatched in college football. His body of work at the safety position is undeniable.”

If Foster has a strong showing at his pro day, his stock will definitely improve.

For now, NFL scouts can check out Foster’s impressive tape from the 2021 college football season.