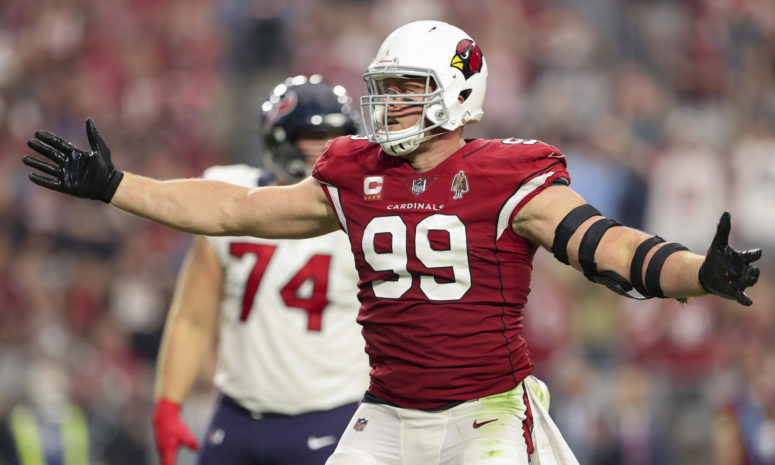 GLENDALE, ARIZONA - OCTOBER 24: J.J. Watt #99 of the Arizona Cardinals reacts after recording a sack in the second quarter against the Houston Texans in the game at State Farm Stadium on October 24, 2021 in Glendale, Arizona. (Photo by Christian Petersen/Getty Images)

With the Super Bowl on the horizon, J.J. Watt and several other Gatorade athletes participated in a flag football game at Lafayette Park. They surprised the Woodcraft Rangers, a local social impact group, with a grant that’ll cover their field time costs until 2024.

Watt has always been a big believer in investing in the youth, so it’s not a surprise to hear that he enjoyed this week’s event.

“I loved hanging out with the kids and coaching their flag football game,” Watt said in a statement. “It’s really important to me to invest in the next generation because they’re the future. And Gatorade feels the same way; the grant they’ve given is going to make a huge impact ensuring young kids in LA can play sports.”

We caught up with J.J. Watt to discuss his latest work with Gatorade, his NFL career and much more.

The Spun: Can you tell me about your partnership with Gatorade and what you were able to do for the Woodcraft Rangers?

JJ Watt: I’ve been partnering with Gatorade since my rookie year, so it has been a great partnership over the years. Today was a very cool day because we got to play some flag football with the kids. We got to let them know about a grant that they’re going to have that covers their field fees until 2024. Being out here in LA, it’s tough to find field time. It’s nice to know teams won’t have to worry about that anymore. They can just go out there and have fun.

The Spun: You’ve always invested time in the younger generation. Why is it so important to you?

JW: For me, I grew up with every opportunity I wanted. If I wanted to play football, I could play football. If I wanted to play basketball or do track, I could do that. There was no barrier for me – I was very fortunate. I realized that not everybody is as fortunate and can pick up a sport.  It’s expensive and tough, and some areas don’t have everything available. It’s important for me to use my platform and foundation to give back and make sure that no kid isn’t given the opportunity just because their family can’t afford it.

The Spun: You recently tweeted “I’ve seen walkthroughs more intense than this” during the Pro Bowl. If J.J. Watt was in charge of running the Pro Bowl, what changes would he make?

JW: It’s a tough predicament because you got guys out there with huge contracts, and no one wants to hurt anybody else. Every player understands the situation. I can’t say what I’d do different. I do like the old school skills competition where Larry Allen was bench-pressing 225 pounds for like 70 reps. The passing competition is cool and dodgeball is cool don’t get me wrong. But I had to give my brother a little heat for what the game looked like the other night.

The Spun: You called the 2021 season a “massive failure” because of the way it ended. What would you say needs to be corrected in the offseason for Arizona to replicate the success it had in the first half of the season?

JW: We obviously need to finish what we started. When you start 7-0, that’s why I said it was a failure. When you show what you’re capable of but then you go out there and don’t play up to those expectations when it matters most, that’s when it’s a failure. Now, if we started out the year and we struggled, then I would say it’s a different situation. But when you know what you’re capable of but don’t do it at the end, it’s frustrating.

The Spun: You managed to return to the field sooner than people expected. How are you feeling now at this point, are you close to 100 percent?

JW: I feel great right now. I was able to come back and play in the playoffs, and since then, I’ve been able to rehab and get my shoulder stronger. I have no issues or limitations right now. I’m able to recover because of my doctors and their ability to put me back together. Secondly, it requires a lot of hard work. You need to sleep right, eat right, and train right to make sure you can stay out there. I tried to get myself back out there because we had a special team this year, and that’s why it was frustrating the way this season ended.

The Spun: I know you’ve probably heard about it. But as a player, I’m curious, how do you possibly tune out the noise surrounding Kyler Murray’s social media activity?

JW: We have lives, so we just go to the facility, work out, and do what you need to do to make sure you’re ready. There’s a million different things we can do.

The Spun: Are you a bit surprised Tom Brady retired this offseason?

JW: I mean, he’s been doing it for an extremely long time at the highest level possible. As an athlete, I don’t know if there’s ever truly a right time. I’m sure he feels like he can still play for a couple of more years if he wants to. But at the same time, his family is important to him and he wants to be there for them. I don’t know if there’s ever a right time, but I do know that there’s never been anyone to do it better. He deserves every accolade he gets.

Every great QB knows that sometimes you just have to chuck it up and let your playmakers make plays. https://t.co/F216dIKRxR

The Spun: You’re entering the final year of your contract with the Cardinals. What’s left on the list of accomplishments outside of a Lombardi Trophy?

JW: That’s it. That’s the only thing I want. That’s my goal. Whatever I can do to help my team pull that off, that’s what I’m going to do.

The Spun: Do you have any thoughts on the upcoming Super Bowl?

JW: I have two very good friends in the game, D.J. Reeder and Mike Thomas. They’re two great guys that are very deserving of lifting that trophy, and I hope they get that opportunity because they deserve it.

The Spun: There’s a video of you hooping that has gone viral. If J.J. Watt could catch a lob from one NBA player, who would it be?

JW: Oh, man. I’d love to be a part of the Suns or the Bucks right now. I’m fortunate because I’m from Wisconsin, so the Bucks are my hometown team. I’ve watched them forever. And now, I’m watching Chris Paul and Devin Booker on the Suns. To have someone toss me a lob though? It would have to be CP3 just because he’s one of the best point guards of all time and he’s not going to throw it anywhere where I can’t get it.

And the occasional accidental hard pick.

Ask me to step outside the paint and that’s when the issues begin. https://t.co/9CuGQX8MQf

When it comes to individual success, Watt has accomplished it all. He’s a three-time Defensive Player of the Year, five-time Pro Bowler, five-time First-team All-Pro, and two-time sacks leader.

The only thing Watt’s résumé is missing is a Super Bowl. Perhaps he’ll cross that off his bucket list next season.