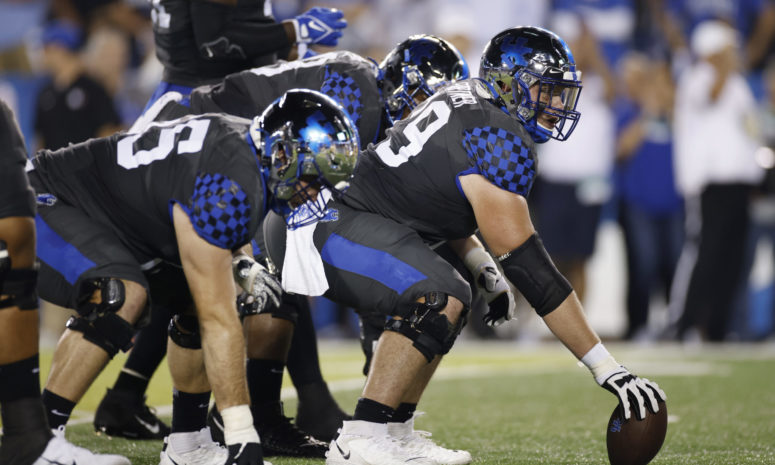 LEXINGTON, KY - OCTOBER 09: Kentucky Wildcats guard Luke Fortner (79) gets set to snap the ball against the LSU Tigers during a college football game on Oct. 9, 2021 at Kroger Field in Lexington, Kentucky. (Photo by Joe Robbins/Icon Sportswire via Getty Images)

Luke Fortner turned a lot of heads during his time at Kentucky, proving to be an excellent blocker in a zone-run scheme. He has also shown that he’s quite versatile, playing right guard and center for the Wildcats.

Once his college football career came to an end, Fortner made his way over to Mobile to show what he can do at the Senior Bowl. It was a golden opportunity for him to boost his stock, and he didn’t disappoint.

Several analysts and scouts raved about Fortner’s lateral movement, hand placement and contact balance. Those are all traits that’ll allow him to succeed at the next level.

We caught up with Luke Fortner to discuss his Senior Bowl experience, Kentucky career, where his leadership skills come from and much more.

Luke Fortner: It was really awesome. It was something I’ve heard a lot about and have had former teammates attend in the past. I had a great time. I met a lot of cool people, and I got a lot of work done during that week.

Special thanks to @JimNagy_SB for the opportunity to represent @UKFootball at the @seniorbowl. A week I’ll never forget! pic.twitter.com/mQ2sKwDkLg

The Spun: You had the chance to work with some really talented quarterbacks. What stood out about that group?

LF: Malik [Willis], Sam [Howell], and Bailey [Zappe] are all great QBs. They’ve done cool things for their respective schools. It was fun to see how they led the team. They’re different people, but similar when it comes to their leadership, confidence and ability to throw the football.

The Spun: Which matchups did you enjoy during the Senior Bowl?

LF: For me, it was from Neil Farrell from LSU and Devonte Wyatt from Georgia. Neil Farrell was a guy we played this season. He didn’t have that great of a game against us during the season, but he blew me away at the Senior Bowl with his performance. And then Devonte Wyatt has always been someone who is a headache to play against. But going up against him in the Senior Bowl was fun.

The Spun: You were invited to the NFL Combine. What are you hoping to show there?

LF: It was really exciting getting that invite. It’s actually funny, they send you this email, and to be honest, it looked fake. I was like ‘This has to be a scam’ [laughs]. I had to double-check and make sure it was real. It was super cool to get that invite. I’ve loved watching the NFL Combine on TV for years. I need to show that I’m a consistent player when I go there. I’m not the most athletic guy, but I’m going to make an impact wherever I go.

The Spun: You had a tremendous career at Kentucky. What did it mean to you to finish your career with a 10-3 record?

LF: It was awesome. I came back for a sixth year and became the grandfather of the team. To have us finish the year with a 10-3 record is really satisfying. I didn’t feel like I wasted a year coming back to this school.

The Spun: What was it like playing for Mark Stoops?

LF: Coach Stoops is a players’ coach. He’s a get-it-done-right kind of guy. If you do what you need to do, he’s going to respect your time and make sure you get a chance to be a college student too. I think he brings in great assistant coaches to help you. He also brings in marquee players, like Wan’Dale Robinson and Will Levis. We wouldn’t have gotten to where we were last season without them.

C Luke Fortner gets lateral and seals the edge here like you teach it. Good stuff. pic.twitter.com/R8MeDkvKL4

The Spun: One of your former teammates, Landon Young, was drafted last year. Did you get to pick his brain about the NFL?

LF: Absolutely. I’ve been friends with a lot of players from Kentucky who are in the NFL. I recently spoke to Landon. He told me that you’re going to see that players are way faster and stronger, but after a few weeks I’ll be ready to rock and roll.

The Spun: Which offensive linemen do you study on film?

LF: I’m a big fan of Jason Kelce. I love how he gets to the second and third levels of a defense. His athleticism and explosiveness jump off the screen. I love watching him play, that’s for sure.

The Spun: If you’re blocking in space, what’s your mindset?

LF: It’s don’t miss. I know that sounds silly, but when you get out there and know the defenders are faster than you, you have to just send it and hope for the best.

Luke Fortner showed impressive lateral quickness and hands on film this year at Kentucky. How did he win here? Take a guess. pic.twitter.com/BFkTKOlQJ8

The Spun: Who was the toughest player you faced in the SEC?

LF: I would say Javon Kinlaw from South Carolina. I played against him a few years ago. He was really hard to block. I’d also say Devante Wyatt from Georgia. Both guys have great speed, size and athleticism. They also play with great leverage.

The Spun: I noticed you’re constantly lifting up your teammates. Where does that leadership and positivity come from?

LF: I appreciate that. For me, I just love seeing my teammates succeed. I guess the selfish part of it is that I feel like I had some part in that success. Whether I did or not, I don’t know. I’m just happy for them and everything we accomplished at Kentucky.

The Spun: What is an NFL team getting in Luke Fortner?

Finishing up some draft grades before heading out to watch the Super Bowl. I may end up higher than most on Kentucky IOL Luke Fortner. Big bodied player that is excellent in space. Needs some work but I'd take him early day 3 to develop pic.twitter.com/L3rJswqs8V

Jim Nagy, the director of the Senior Bowl, believes Fortner is going to make an NFL team very happy later this year.

“Some team is going to get a longtime starter when they draft you, Luke. No doubt you’re ready to be a pro,” Nagy tweeted. “Made an impact on a lot of people in a short period of time here in Mobile. Thanks for coming!”

We’ll find out where Fortner’s pro career will begin in the spring. For now, his focus is on Kentucky’s pro day and the NFL Combine.