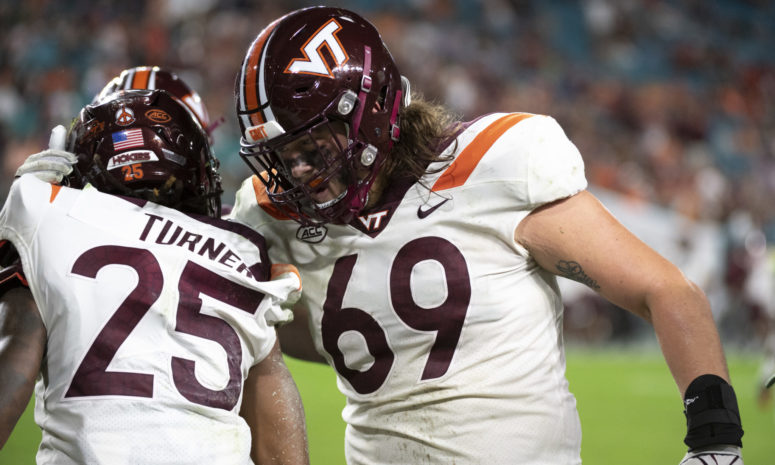 Last year, Virginia Tech sent offensive tackle Christian Darrisaw to the NFL. This year, the Hokies will have the honor of sending Luke Teunta to the pros.

Tenuta, an All-ACC offensive tackle, spent time on both sides of the line for the Hokies. He started in 12 games this past season, and clearly he showed enough talent to warrant an invite to the Shrine Bowl.

Not only did Tenuta secure an invite to the Shrine Bowl, he was recently informed that he’ll be at the NFL Combine later this year.

We caught up with Luke Tenuta to discuss his Virginia Tech career, the team’s impressive offensive line group, his preparation for the NFL Draft and much more.

The Spun: What was your experience like at the Shrine Bowl?

Luke Tenuta: It was awesome. It was my first time in Vegas. I got to experience that with two of my teammates, Brock Hoffman and Jermaine Waller. The whole event is awesome, and it’s a great cause for the Shriners Hospital for Children. It’s great to get that hands-on experience with NFL coaches.

The Spun: Who gave you the best matchup at the Shrine Bowl?

LT: There were some really good edge rushers there. Big Kat Brant from UCF – he did pretty well. I enjoyed going up against him.

The Spun: What did it mean to get invited to the NFL Combine?

LT: It was awesome getting the invite. I grew up watching that on TV. I’m looking forward to showing my athleticism and meeting with teams again?

The Spun: Virginia Tech had the most NFL Combine invites in the ACC. I got to ask, what does the future for your former school look like with all that talent gone?

LT: I feel good about it. Obviously, it’s going to be a younger team next season. But I feel like Coach Pry is going to come in there with a great staff and recruit very well. I feel like the future is bright for Virginia Tech. The first year might not be a magical year, but they got a lot of young talent there. I’m excited to see those players grow into bigger roles.

The Spun: I spoke to Brock Hoffman recently about the NFL talent on Virginia Tech’s offensive line the past two seasons. What was that position group like behind closed doors?

LT: It was a very fun group. That group was tight. We did everything together the past two years.

The Spun: Have you been able to get any pointers from Christian Darrisaw?

LT: For sure. I talked to him about the process, albeit his was different since most of it was virtual. I’ll still bother him from time to time, asking questions and what not. He did a great job as a rookie. It’s always helpful to pick his brain.

The Spun: Which offensive linemen do like to study on film?

LT: Obviously, you have to watch the best left tackle in the game. Trent Williams goes out there and throws people. He moves so well for his size. I love watching, when he’s healthy, David Bakhtiari. When he’s healthy, he is so good in pass protection. Those are my two favorite players to watch film

The Spun: What’s your mentality when you’re blocking in space?

LT: When you’re out in space on a screen pass, you never want to dance with one of those little guys. You got to run through them and make them choose where they want to go.

Hokie Luke Tenuta has been smooooooth. Quick feet, gets hands and is having some effortless reps. pic.twitter.com/ErkiwmX8Jj

The Spun: What is going to separate you from other offensive linemen in this rookie class?

LT: My length is one thing. I’d also say my mentality when it comes to studying and perfecting my craft. I want to know the ins and outs of everything. I don’t want to make the same mistakes twice. I would say that’s what allows me to separate myself from other offensive linemen.

The Spun: What is an NFL team getting in Luke Tenuta?

LT: A guy that is going to come in and work his tail off. I love football. I’m going to work hard and do whatever I can for the team.

Tenuta has impressed a lot of scouts with his length and mobility. Those qualities should allow him to find his way onto the field in his first year in the NFL.