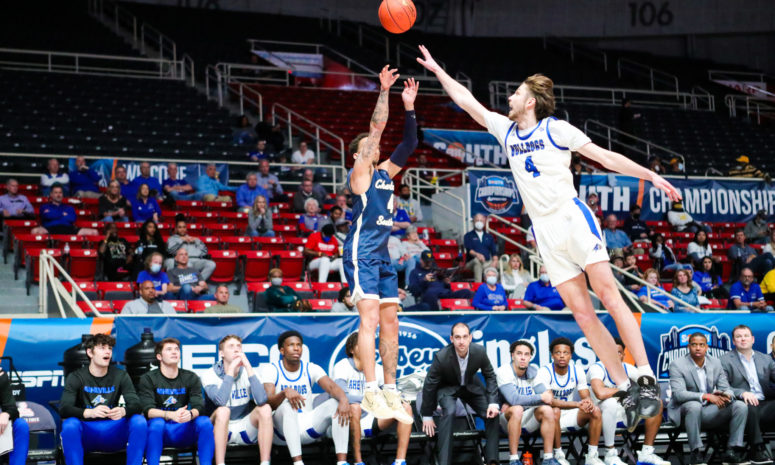 CHARLOTTE, NC - MARCH 02: Deontaye Buskey (4) of the Charleston Southern Buccaneers shoots a three pointer over Martin Kawa (4) of the North Carolina-Asheville Bulldogs during the Big South Tournament between the North Carolina-Asheville Bulldogs and the Charleston Southern Buccaneers on March 2, 2022, at Bojangles Coliseum in Charlotte, NC. (Photo by David Jensen/Icon Sportswire via Getty Images)

The Big South Conference tipped off its college basketball postseason with a thriller on Wednesday evening.

In just the first-round of tournament action, the No. 5 seeded UNC-Asheville Bulldogs faced off against the No. 12 seeded Charleston Southern Buccaneers.

Heading into today’s contest in Charlotte, the Bulldogs were double-digit favorites over their opponent that finished dead last in the conference. Charleston Southern went 1-15 in conference play and 5-23 overall through the 2021-22 regular season.

Despite trailing by double digits in the second half, the Buccaneers stormed back to claim a 79-78 victory that came on a shocking last-second tip-in.

Fans from around the college basketball world took to Twitter to react to this incredible upset.

“1-15 in conference play this season. Down 10 basically all game. College basketball is the best,” one wrote.

“How could anyone not love March Madness?” another asked.

With today’s upset, Charleston Southern will face off against No. 4 USC Upstate in the quarterfinals on Friday.