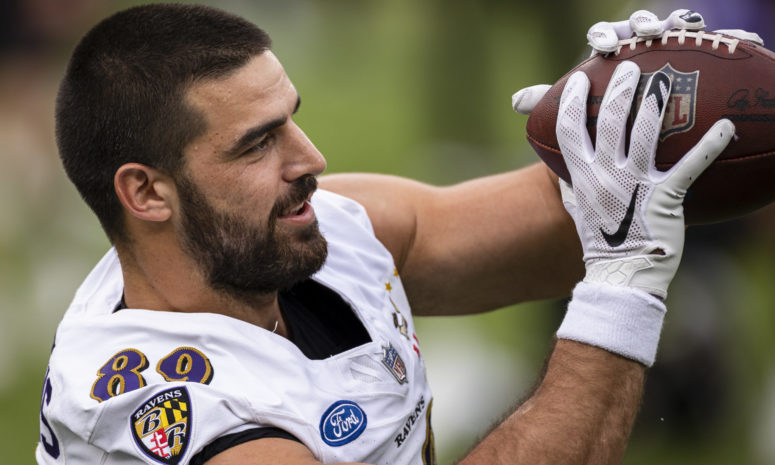 In his fourth NFL season, Baltimore Ravens tight end Mark Andrews notched the best year of his young career, making good on a massive four-year, $56 million contract he signed with the team prior to the 2021 season. Through a full 17 games, the top-tier TE logged a career-high 1,361 yards and nine touchdowns on 107 receptions.

Unfortunately for the Ravens, Andrews’ All-Pro play wasn’t enough to propel the franchise to a postseason berth – marking the first time Baltimore failed to make the playoffs since drafting Andrews with a third-round pick in 2018.

When Lamar Jackson went down this year, Tyler Huntley stepped in and played some really good ball. Could you talk about some benefits of having that depth at quarterback?

“Obviously Lamar is our guy. He’s a leader. He’s the guy everybody looks to on our team and he’s a very very special player. For him to go down, it was tough for our team. We had a lot of that this year, but we’re a really resilient team. I’m really proud of us this year and how guys fought. Like you said, Tyler Huntley – we call him ‘Snoop’ – the way that he was able to show depth and the way that he played, he can really sling the ball around. I think for us it just makes us a deeper team. We are a deep team as it is and for us to have a backup quarterback like that, that’s huge for us.”

Do you think Huntley will be a starting quarterback in the NFL soon? 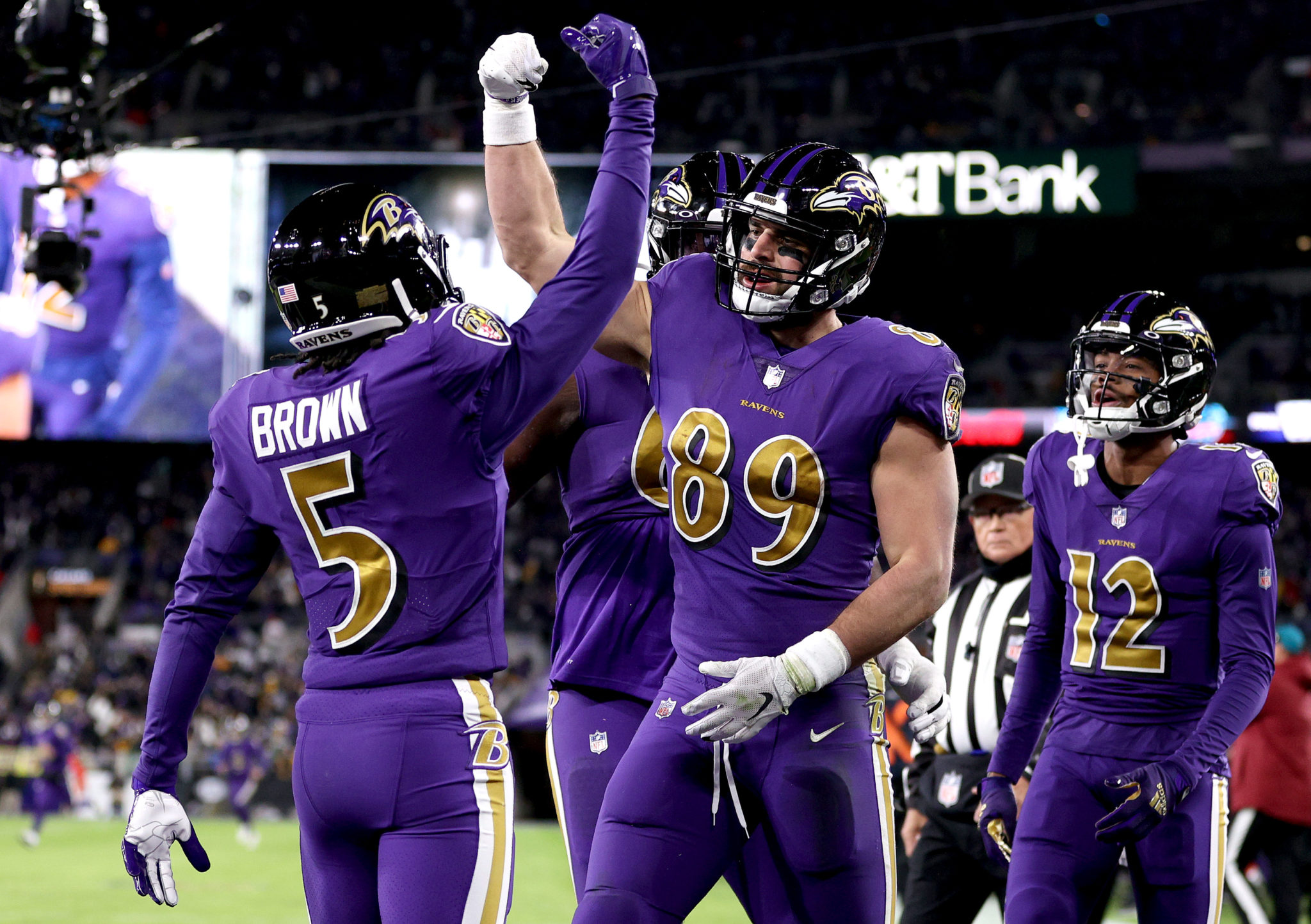 You and Marquise “Hollywood” Brown led the way in the receiving game this year. Who do you think will step up at receiver in 2022?

There were some solid rookie tight ends in the league this year. Who impressed you the most?

“I think the Steelers tight end, Pat Freiermuth. He had a really good season. I think for him, he’s just going to get better and better. Over there they like their tight ends, so I’m excited to see him grow.”

You’ve inserted yourself as one of the best tight ends in the league. Where would you rank yourself among the NFL’s best?

“I tell people I always try to be best. I want to be the best. There’s a lot of really good tight ends. I think the upper echelon of tight ends right now are all competing. I don’t like to name one person the best because you look at guys like Travis Kelce, who has six 1,000-yard seasons in a row and is just a total baller. George Kittle is one of the most complete tight ends ever. And Darren Waller is just a freak athlete and a really, really good tight end. All those guys, man. They’re really good. I think it’s fun we’re able to compete and push each other to be better.”

You’ve faced off against some elite defenders in your career. Who would you say has been your toughest matchup?

“For me, I think (Titans All-Pro safety) Kevin Byard. Kevin Byard is a really good player. He’s kind of the guy they stick on tight ends a lot. He’s got a really good strong punch to him and whenever I go against him I really know I have to bring it.”

The Bengals are in the Super Bowl. The Browns have emerged in recent years. The AFC North is one of the toughest divisions in football. What do you think the Ravens need to do to win the division next season?

“We were hurt with a bunch of injuries, so for us, it’s just about staying healthy. We have a really, really good team – a really deep team. A lot of great players and guys that are at the top of their positions, and that’s throughout our team. Just staying healthy. If we didn’t have all these injuries this year, we would’ve been a different team. I’m excited to have this time off and have these guys get healthy and come back ready to work. That’s what we do at the Ravens, we’re gonna be ready to go.” 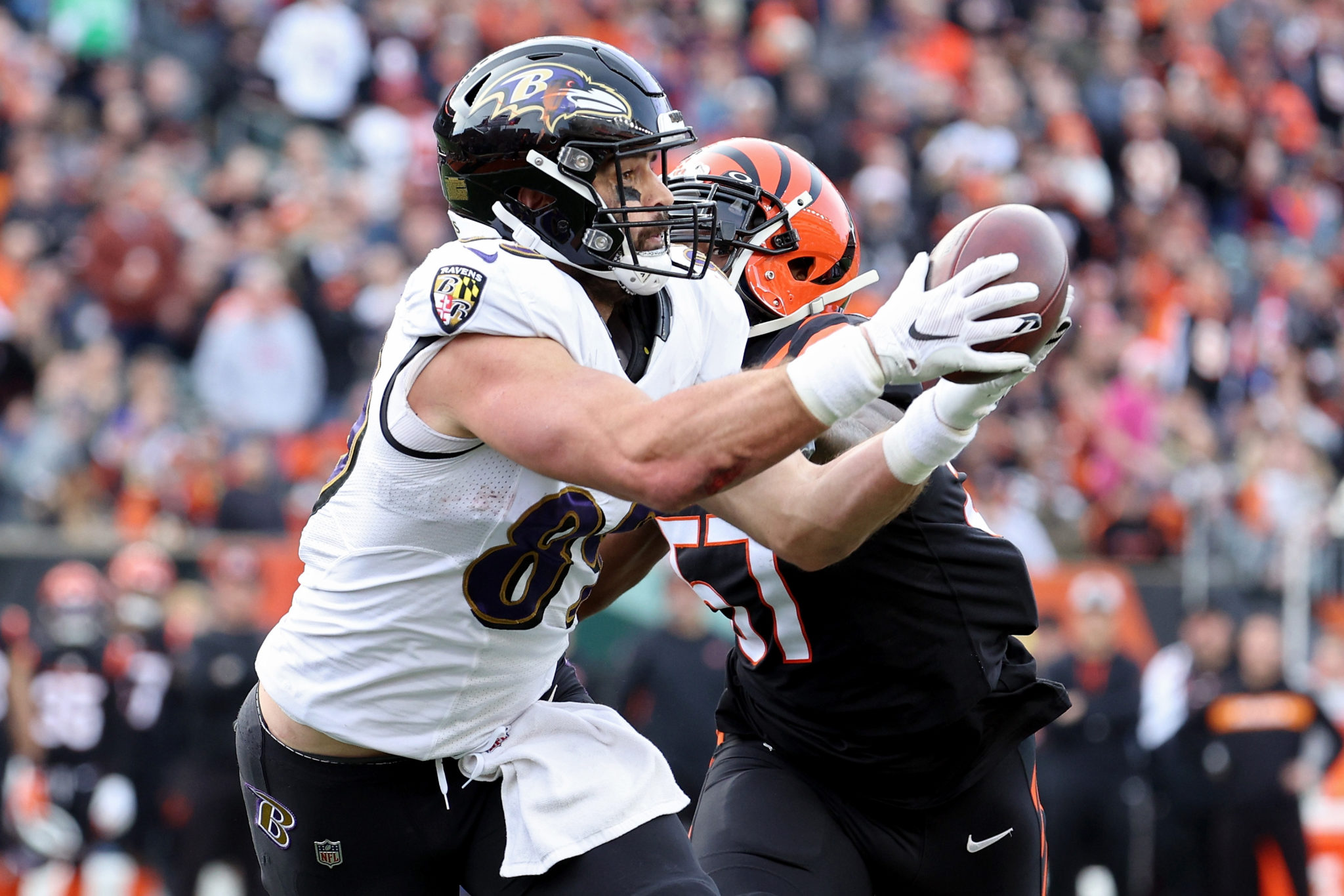 How close are the Ravens to being Super Bowl ready?

“We’re really close. We’ve been in the playoffs the last three out of four years. Obviously we haven’t gotten as far as we’ve wanted, but it’s about time. I think that we’ve had a really, really young team, but like I said, it’s myself, it’s Lamar, it’s Hollywood – guys that are growing and maturing as football players. We’re just gonna get better and better. So I’m excited – I think it’s coming.”

“For me it’s all about managing my blood sugars… My whole thing is ‘knowledge is power.’ If I can know where my blood sugar is going – if it’s trending up, trending down after I eat. It’s all leading up to practices and games, making sure that my levels are stable. I think if you do that and you take care of yourself and you trust the people around you – you trust your family and have good people around you – you’re gonna be okay. I always encourage people with Type 1 Diabetes ‘you can do whatever you want to in life.’”

Could you tell us about your partnership with Gillette?

“Yeah, man. I’m having a great time out here in Santa Monica with Gillette labs. It’s the nationwide release of their new razor with an exfoliating bar. It’s an incredible razor and I encourage everyone to go try it out. They do things top-notch, man. The best razor out.”

More interviews from The Spun can be found here.