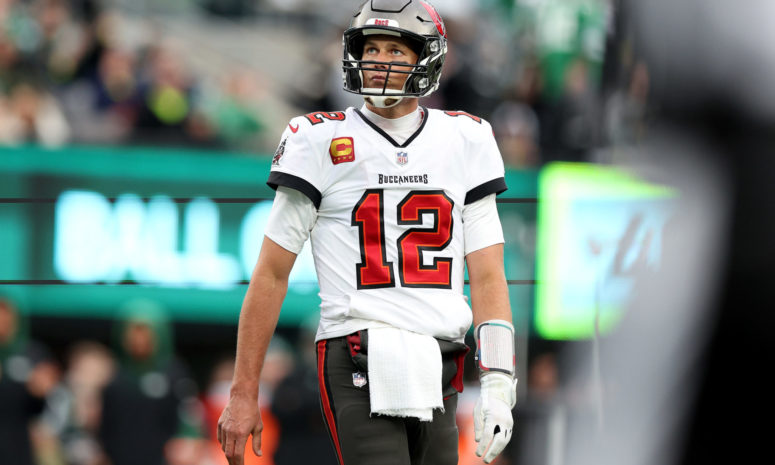 EAST RUTHERFORD, NEW JERSEY - JANUARY 02: Tom Brady #12 of the Tampa Bay Buccaneers reacts after a pla in the fourth quarter of the game against the New York Jets at MetLife Stadium on January 02, 2022 in East Rutherford, New Jersey. (Photo by Elsa/Getty Images)

Earlier this week, Pro Football Talk’s Mike Florio said the Miami Dolphins attempted to pursue Tom Brady and Sean Payton, a plan they scrapped after former head coach Brian Flores filed a lawsuit against them and the NFL.

According to Dolphins general manager Chris Grier, that rumor was only half true.

While speaking to reporters Wednesday, via Omar Kelly of South Florida Sun-Sentinel, Grier said the team reached out to Payton about their head coaching vacancy, but they had “no interest” in the recently retired Brady.

Dolphins General Manager Chris Grier admitted that they called the Saints about Sean Peyton, but the Saints blocked them from having a conversation. But there was no interest in Tom Brady.

Grier said the New Orleans Saints blocked the Dolphins from contacting Payton, who stepped down after 15 seasons as the franchise’s head coach. Along the same lines, the Tampa Bay Buccaneers wouldn’t have helped Miami bring Brady back to the gridiron.

It’s a moot point as long as the 44-year-old Brady also had no interest in joining a new Florida football team. As much as some would love to see the seven-time Super Bowl champion come back for another season, it’s probably time to accept that his NFL playing career is over.