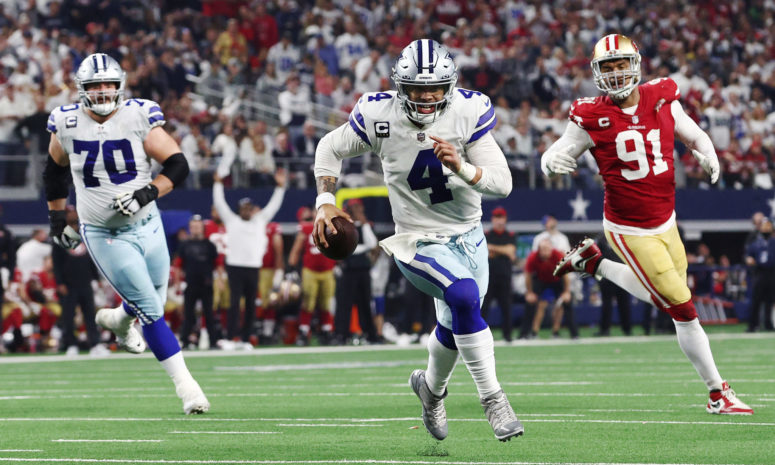 ARLINGTON, TEXAS - JANUARY 16: Dak Prescott #4 of the Dallas Cowboys rushes for a touchdown against the San Francisco 49ers during the fourth quarter in the NFC Wild Card Playoff game at AT&T Stadium on January 16, 2022 in Arlington, Texas. (Photo by Tom Pennington/Getty Images)

Dak Prescott has undergone a small procedure on his non-throwing shoulder.

Dallas Cowboys head coach Mike McCarthy announced that it was a cleanup procedure and that it shouldn’t affect his offseason.

#Cowboys coach Mike McCarthy announced that QB Dak Prescott underwent a cleanup surgery on his left, non-throwing shoulder. The expectation is that it won’t affect his offseason.

This should be welcome news for Cowboys fans as he’ll be even healthier going into next season.

Prescott was still great this past season after throwing 37 touchdowns and 10 interceptions off 4,449 yards through the air.

He came back and helped lead the Cowboys to the playoffs after they missed during the 2020 season. Dallas won the NFC East and got the third seed in the NFC before losing to the San Francisco 49ers in the first round.

Prescott will look to not only lead Dallas back to the playoffs next season, but on a deeper playoff run.

The Cowboys haven’t gotten past the divisional round since 1995, which was also the same year they won their last Super Bowl.

It remains to be seen what the organization does this offseason in order to give Prescott some big-time weapons.