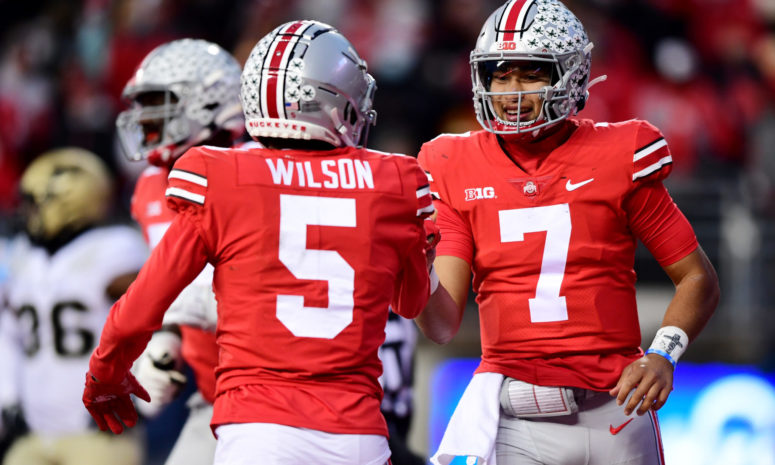 COLUMBUS, OHIO - NOVEMBER 13: Garrett Wilson #5 celebrates with C.J. Stroud #7 of the Ohio State Buckeyes after a touchdown during the first half of a game against the Purdue Boilermakers at Ohio Stadium on November 13, 2021 in Columbus, Ohio. (Photo by Emilee Chinn/Getty Images)

This year’s NFL Scouting Combine has already produced some interesting soundbites from prospective talent — including one today from star wide receiver Garrett Wilson.

When asked about the idea of playing alongside Cleveland Browns quarterback Baker Mayfield, the former Ohio State standout said he would love to link back up with “his guy,” per Cleveland insider Hayden Grove.

Wilson and Mayfield both attended Lake Travis High School in Austin, Texas. The two have thrown together in the past and Wilson has formally met with the Browns franchise.

Ohio State WR Garrett Wilson said he would love to link back up with “his guy” Baker Mayfield.

The two attended Lake Travis High School and have thrown together in the past.

He has met formally with the Browns. #Browns pic.twitter.com/uEymQaXSvX

The Browns currently hold the No. 13 overall pick in this year’s draft and are no doubt on the hunt for some improved wide receiver talent heading into the 2022 season. In fact, some feel the Cleveland front office could trade up in the draft to get their next wideout man.

Through his final season with the Buckeyes in 2021, Wilson logged 1,058 yards and 12 touchdowns. The Browns struggled mightily in the receiving game this past season — failing to see a single receiver break 600 yards on the year.

Who do you think the Browns should take with their first pick in the draft?