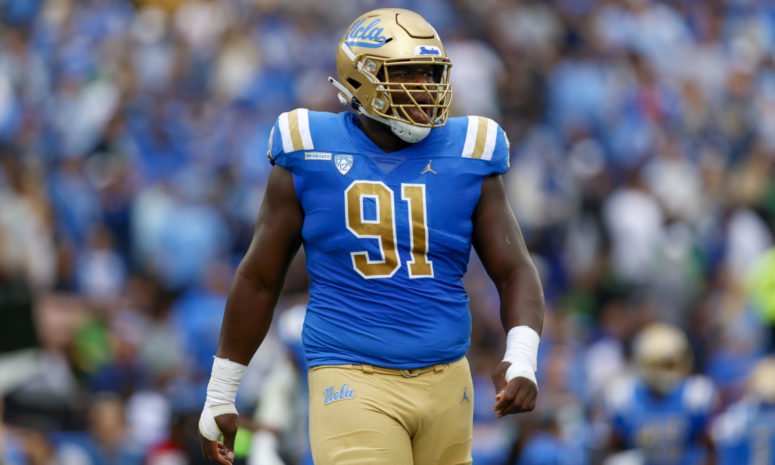 PASADENA, CA - OCTOBER 23: UCLA Bruins defensive lineman Otito Ogbonnia (91) during a college football game between the Oregon Ducks and the UCLA Bruins on October 23, 2021, at the Rose Bowl in Pasadena, CA. (Photo by Jordon Kelly/Icon Sportswire via Getty Images)

With the 2022 NFL Draft a little over two months away, UCLA defensive lineman Otito Ogbonnia is absolutely a name to watch. Earlier this month, he showcased his skillset the Senior Bowl in Mobile, Alabama.

Ogbonnia had a nice career with the Bruins, racking up 76 total tackles, 8.5 tackles for loss, 4.5 sacks and two forced fumbles. His production at the collegiate level is what earned him an invite to this year’s Super Bowl.

The NFL Scouting Combine has also extended an invite to Ogbonnia, which means he’ll have another opportunity to boost his draft stock. It’ll be interesting to see how a player of his stature performs in various drills.

We caught up with Otito Ogbonnia to discuss his career at UCLA, experience at the Senior Bowl, the NFL Combine and much more.

The Spun: How was your Senior Bowl experience?

Otito Ogbonnia: It was a good experience. It was kind of everything I imagined it to be. It was tough, it was strenuous, it was eye-opening and it was exciting. I think I came out of there proving what I can do – especially in one-on-one situations against the offensive line. I think I came out there with good energy and started really hot.

The Spun: Who was the toughest player you faced in Mobile?

OO: I’d probably go with Zion Johnson from Boston College. He’s an offensive guard, but he played all around the interior that week. What’s interesting about him is that he’s a bit undersized, but he has such a good anchor. He can easily reset on defenders and get inside leverage. It was pretty fun going up against him.

The Spun: Were you able to connect with certain NFL teams more than others?

OO: I definitely made some strong connections with the Jets since I was with them all week. I did interview with all 32 teams, and some of them interviewed with me more than once. Most of the teams had a good idea of the type of player and person I am.

@UCLAFootball DT Otito Ogbonnia shot the gap like a meteor on this play.#TheDraftStartsInMOBILE

The Spun: You spent the last four years making plays for UCLA. What would you say improved the most during that span?

OO: I would say my technique. Playing with technique is so important for defensive linemen. Some players have great strength or great speed, but technique takes time in order to polish it. I showed a lot of improvement in that department over the years.

The Spun: What will go down as your favorite moment from your time with the Bruins?

OO: One of my favorite moments is our win over LSU. It was a packed house and a beautiful night in Pasadena. There was this idea that we couldn’t hang with the SEC, but we proved that we do belong. It was a really cool moment for all of us, and it showed what we can do when we put our minds to it.

The Spun: What was it like getting an invitation to the NFL Combine?

OO: It means a lot to me. It’s definitely something I’ve dreamt about for quite some time. Being able to participate in the NFL Combine is awesome, and I hope to make UCLA and my family proud. I want to show my athleticism at my size and put some numbers up that equates to good defensive line play.

Ready for the next level! 📈

Congratulations to our guys that were invited to the @NFL combine! 🙌#GoBruins pic.twitter.com/JVS2jyfuCx

The Spun: Which defensive linemen do you like to study on film?

OO: I like to study Fletcher Cox, Akiem Hicks, and Dalvin Tomlinson. I also like to study Ndamukong Suh. I like the power and aggressiveness they play with. They’re not too fancy with their pass rush. They know how to be aggressive while also staying technical. That’s the type of player I want to be.

The Spun: What part of your game do you think will allow you to have success at the next level?

OO: I think it’s my ability to have good leverage at the point of the attack. It’s something I’m still working on, but I can hang my hat on it. I can be disruptive with it and penetrate through the line with my explosiveness.

.@UCLAFootball offense has been good, but it’s the defensive talent that has impressed most this year.

Rewatched game vs. LSU, and play here by DT#91 Otito Ogbonnia (@otitoogbonnia12) and EDGE#45 Mitch Agude (@OfficialAgude) was outstanding despite it being a 2 on 3 situation. pic.twitter.com/7UD9F3mxfp

The Spun: What has been your motivation so far in your career?

OO: Trying to make my family proud. I promised them I would get this done when I first started playing football. It’s one of those things where I want to be the best I can be at it. I never really settle for the average in anything I do. I just want to play for my family and be able to give back to them.

The Spun: What is an NFL team getting in Otito Ogbonnia?

OO: A really disruptive player who is going to get in the backfield, knock guys back, command a lot of double-teams, command a lot of attention on the offensive line, and someone who will really affect the game by forcing offenses to run the other way.

Most of UCLA DT Otito Ogbonnia's time is spent taking on doubles or nose-up on C stuffing runs. But I've seen the 330-lber win gaps like on this play, chase quick passes to the hash. Keeping his pads low and staying fresh gives him a shot to be a player on Sundays. #SnapScout22 pic.twitter.com/j39H8FLuRg

Ogbonnia has received a lot of praise for his upper-body strength, explosiveness and ability to fight across the line of scrimmage.

Though he might not be a finished product just yet, Otito Ogbonnia is a very appealing prospect who could elevate an NFL team’s defensive line in 2022.