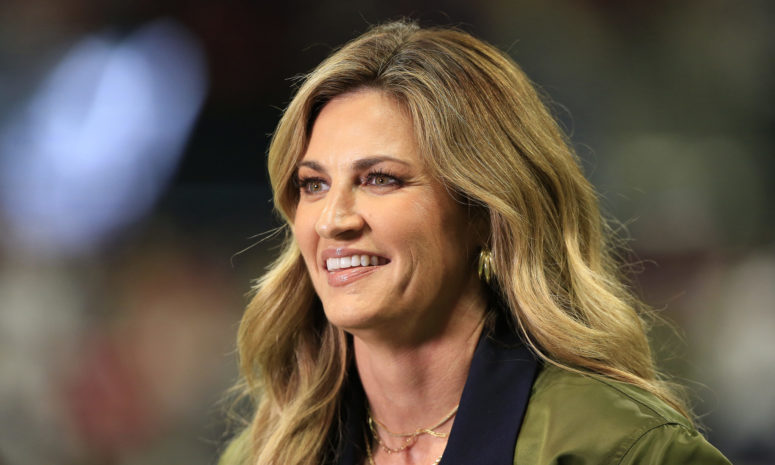 Veteran sideline reporter Erin Andrews is consistently calling the biggest games each and every week. But even she doesn’t love every aspect of her job. In a recent conversation, thanks to Crown Royal, she detailed the past of her job she likes the least.

But that’s not all. She also revealed where she hopes Green Bay Packers quarterback Aaron Rodgers plays next season – and for the rest of his career. All of that, plus her suggestion for Tom Brady now that he’s heading into retirement can be found in my conversation with her below:

The Spun: Favorite player to interview?

Erin Andrews: I think it’s going to be David Ortiz. Why? Just that smile and it doesn’t matter what he says it’s just the smile. You know, I did a post-game interview with him after the Red Sox won it all after the Boston bombing. Of course I had to make him reenact the “this is our bleeping city!’ You’re never supposed to give your microphone up and I just handed Papi my microphone. If you’re ever been around David Ortiz, I mean, you don’t even have to be around him – just look at that gorgeous smile and he just radiates this vibe that everyone just flocks to him. So, yeah Papi is one of my all-time faves.

And I think right before that interview, my dad was standing with me because I got my dad down on the field cause he’s a Red Sox fan. Papi came out as we were walking from the concourse back on the field and he was in a tank top and goggles and he was spraying me and my dad with champagne. It was just awesome! It was a daughter’s dream come true for her father. 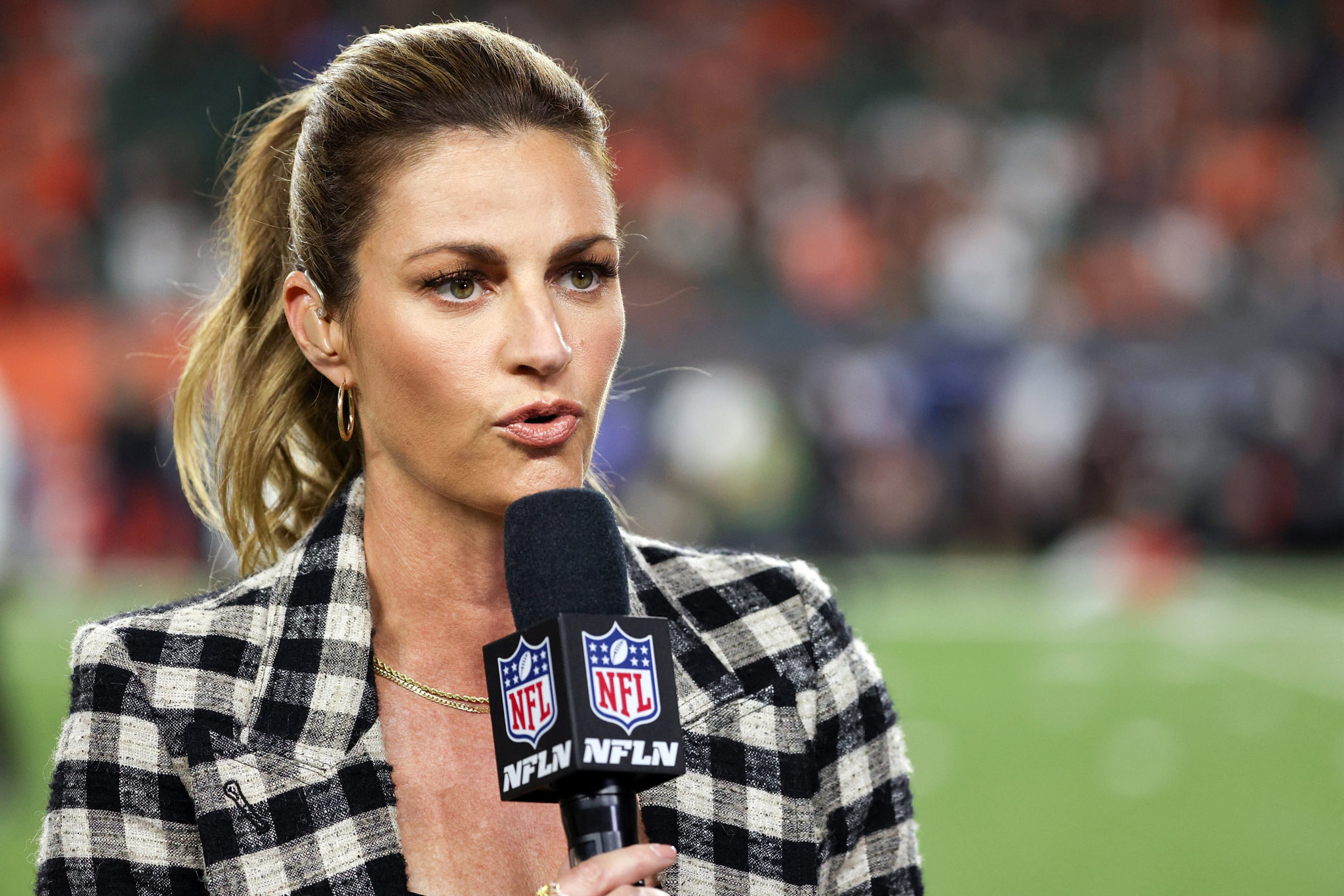 TS: If you could interview anyone – doesn’t have to be sports related – who would it be?

EA: You know, I have never had the opportunity to interview Brett Favre and I was also raised a Green Bay Packers fans – I realize we’re all over the map here. But, I got to interview him back in the day when I was still with ESPN and I was backstage at the ESPY’s. I would love to do a sit down sports interview with him. I remember we covered the Super Bowl in Miami and it was the San Francisco 49ers vs. the Kansas City Chiefs and I was doing radio row to promote my clothing brand and he was there and I was having a meltdown – like in a great way, ‘oh my gosh I just want to get a picture with him.’

Because I’m a huge sports fan too and this is how I became a big football fan was watching Brett with my dad. I would love to just sit and do a FOX feature with him, but I’ve never gotten the chance. I sit down and listen to Joe Buck and Troy Aikman talk about what production meetings were like with Favre all the time and I would have died for those. Our production meetings and our conference calls are some of the coolest experiences of my career. Having your husband walk by and say, ‘oh who are you talking to?’ and you get to say, (whispers) ‘oh it’s Tom Brady. It’s Aaron Rodgers,’ it’s just like ‘whoa who and I talking to?!’ So it would be cool to just sit down and do a feature or a call with Brett Favre.

TS: What would your dream assignment be?

TS: What is your least favorite part about getting ready for game day?

EA: Not eating. It’s really hard to eat on the sidelines. I’m laughing and looking over at my girl who works at FOX and does our makeup and she goes down and I’m just shoving an uncrustable in my face. Then she goes up to the booth with Joe and Troy and they have a sushi spread and a coffee bar and chicken fingers. I’m like I’ll die for a chicken finger down on the field. Someone will say, ‘hey, Troy wants to know if you want this salmon dish?’ It’s like, ‘where and I going to sit down and have a salmon dish?’ We’re third-and-four here and Deebo’s driving like what are we doing? So, yeah you need to have like a quick trail mix or an uncrustable, you don’t get to eat at all. You can’t even go to the bathroom half the time – it’s a real treat. That is the worst part of the game, but besides that the gig is amazing.

TS: You’ve been open about wanting to keep your FOX broadcast team together. With Troy Aikman being mentioned for Amazon, do you think it’s feasible to keep the team together?

EA: I mean, no, I don’t want those guys to leave me are you kidding? This has been the best career move I’ve ever made in my life and those guys are like my brothers or my best friends. I tell them everything and we have the best time – I mean I think, apparently I’m the only one that thinks that way because they’re leaving me. I don’t know, I’ll call you when their contracts are signed.

My contract’s up, I mean come on!

TS: Yeah, so where are you headed?

EA: Right here. At my house, that’s what I have going on.

TS: There was some uproar when people saw you hugging Aaron Rodgers after a game. What did you make of that?

EA: I think people were upset about the ‘six feet apart’ thing. I give hugs to all of these guys in post-game interviews because I’m pretty close with them. I give a hug to everyone. That one cracks me up, because where was that when Matthew Stafford beat the Seattle Seahawks on Thursday Night Football? Where was that when I hugged Odell [Beckham Jr] in Week 18? Where was that when Greg Olsen hugged George Kittle on the sideline and it was used everywhere for memes and stuff, you know?

I don’t think…I think it’s just people…I think Aaron’s just a little bit of a lightning rod right now and I think that’s what went on with everyone. 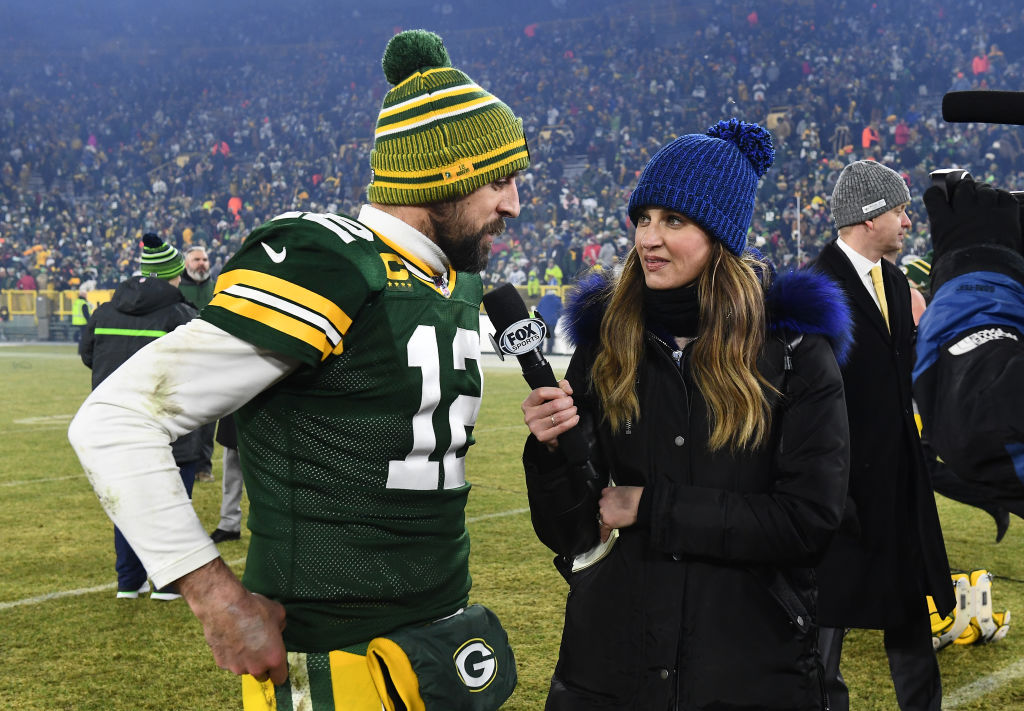 TS: If you were choosing a landing spot for Aaron Rodgers, where would he be playing?

TS: Do you think they need to do anything different, though to actually make it to the Super Bowl?

EA: Well, I think they need to sign Davante Adams. Look, that’s a question for Troy, that’s a question for Joe. I just know it was hard to see the look on their faces when the game [against San Francisco] turned like it did. They have been very close and I’ve been there for basically all of their losses like in the NFC championship a few years ago. You hate it for them. I really thought we were going to see them in the NFC championship. I’ll leave that for the football people and make the decisions they need to. Obviously they made a change with their special teams coordinator this week. Hopefully everything stays the same, but they figure out how to get to the next level.

I think the answer that you want to hear is that, yes, Tom Brady opened the door for these star players to say, ‘look, I realize I don’t have a lot of time left. I want to go win, let’s go win where I can.’ Can Aaron do that? I’m sure he can. Do I selfishly want him to do that? No. I want him to stay in the NFC so I can continue to cover him. It would be very difficult to see him somewhere other than Lambeau Field.

The incident you’re talking about where I did hug him, I think if people had been there that moment was so special. He had just broken Brett Favre’s record, the crowd is cheering ‘MVP, MVP’ and he had already been through so much that season. Is he leaving, is he going? Does the fanbase care? There was the whole COVID toe thing – I’m joking about that cause he makes a mockery of that. It was just a really cool moment and the guy had tears in his eyes. So I don’t want him to leave. I love that whole storyline. I’m kind of a romantic when it comes to wanting people to stay. You know, it’s just like with Tom [Brady]. I don’t want him to be done, I want him to play forever so I can keep covering him.

But that kind of stuff doesn’t always happen.

TS: You have personal experience with watching a professional athlete, your husband [Jarret Stoll] retiring from something he’s done for the past 25-30 years. With Tom Brady announcing his retirement is there something you’d tell him?

EA: I mean, my husband is retired, but he’s not he’s working for the Los Angeles Kings. You know, I think he was home for like two weeks before I was just like, ‘hey man you just gotta figure this out because you staying at home right now is not good for you and it’s not good for me.’ And he went to the facility right away and figured out what his next move was going to be. So, yeah, I mean we’re friends with Tom. I said to my husband, ‘is he going to stop eating well? Is he going to have a drink with us every once in a while? What’s going to go on here?’

But, yeah, it’s hard. I mean my husband was already doing this by the age of 15 and playing in junior hockey. Tom is an unbelievably disciplined person and athlete and business man. So I think it’s going to be really interesting to see where he lands next. Re-entry for my is tough after being on the road for 18 weeks. I can’t imagine what it will be like for Tom after 22 years in the NFL. 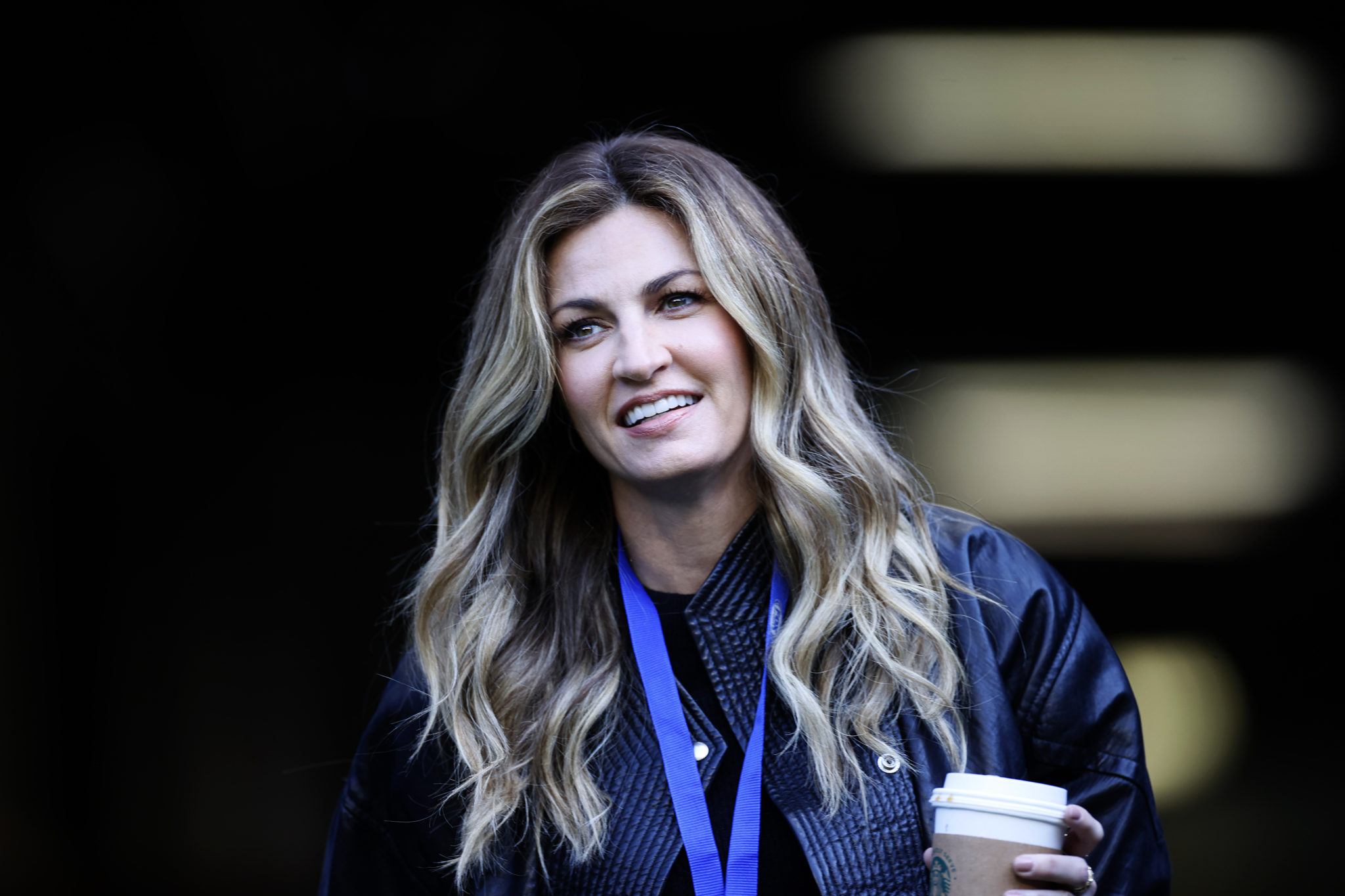 TS: You’ve traveled all over the country for work, so which city has the best food?

EA: Chicago is really good. Dallas, we love Dallas so much. We like have our spots there, but there’s one spot where  we can never get in. Uchi let us in when we call for a reservation next year! But we went to the Charles. Troy took us to the Charles a couple weeks ago and that was amazing. We’re just in Dallas so much that we can actually put our bags down and run out and actually get something to eat. So I feel like that’s where we’re the most seasoned vets.

TS: Why don’t you tell us a little bit about what you have going on with Crown Royal leading into the Super Bowl?

EA: Crown Royal and I are gifting 56 of the most influential women in sports with their newest whiskey blend. It’s Crown Royal 18 Year Old and we’re so excited for them to get that. But we’re even more excited about is that Crown Royal is donating $1,000 on behalf of each of those 56 women to WISE. It’s a whole initiative to support women in sports and in business. Of course I love everything about that because I own my own female apparel line within the NFL and all these other leagues. Anybody who can support women and trying make headway in this crazy, crazy industry I obviously appreciate.

Every interview from The Spun can be found here.