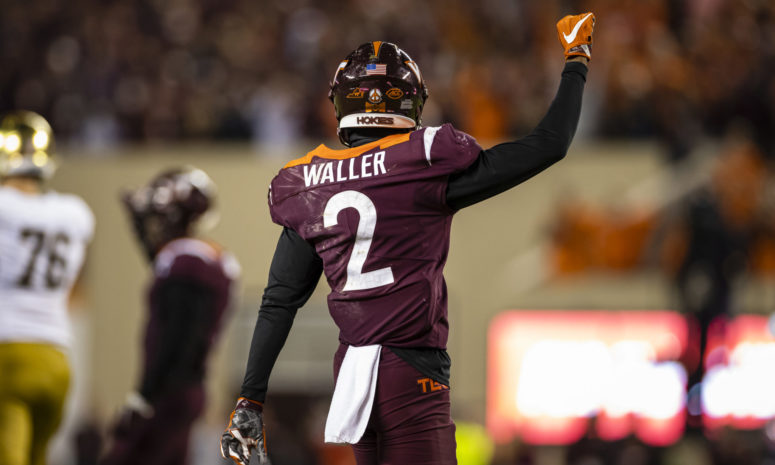 BLACKSBURG, VA - OCTOBER 09: Jermaine Waller #2 of the Virginia Tech Hokies reacts to a play against the Notre Dame Fighting Irish during the second half of the game at Lane Stadium on October 9, 2021 in Blacksburg, Virginia. (Photo by Scott Taetsch/Getty Images)

Jermaine Waller battled injuries early in his college career, but the talented cornerback finished his time at Virginia Tech on a very positive note. With the 2022 NFL Draft just a little over two months away, he’s expected to hear his name called.

Over the course of his Virginia Tech career, Waller had 109 tackles, 17 pass breakups, seven interceptions and a forced fumble.

Waller’s production with the Hokies earned him an invite to the Shrine Bowl, where he was able to showcase his skills in front of NFL coaches and scouts.

We caught up with Jermaine Waller to discuss his favorite moment at Virginia Tech, what separates him from other cornerbacks, the Shrine Bowl and much more.

The Spun: How was your experience at the Shrine Bowl?

Jermaine Waller: The Shrine Bowl was a great experience. I learned a lot from it, like what you need to do to get to the next level. It was great talking to teams, and I was able to explain the type of player I am.

The Spun: You had such an impressive run at Virginia Tech. Do you have a favorite memory from your time there?

JW: I would say the Notre Dame game. I had my first pick-six in that game. I’d say that was my most memorable moment, and it came at such a crucial point in the game.

The Spun: Which matchups did you really enjoy during your college career?

JW: I liked going up against guys like Dyami Brown and Chase Claypool. Those matchups were really fun.

The Spun: You were invited to the NFL Combine. What does that mean to you?

JW: I’m just so excited and blessed to show my abilities in front of all 32 teams. I think it’s going to be a great experience for me.

The Spun: Which cornerbacks do you like to study on film?

JW: I like to watch Jalen Ramsey, especially because he has been playing a lot of nickel lately. He’s just a complete player. I also like to watch Jaire Alexander. He’s a great cornerback as well. The way he attacks the ball and stuff like that is impressive. Tre’Davious White is another cornerback who I’ve learned a lot from just by watching him.

The Spun: What are you hoping to show at the NFL Combine and your pro day?

The Spun: What skill of yours separates you from other cornerbacks?

JW: I’d say my confidence. My competitiveness is another thing. I feel like I compete with myself every day. I try to be a harsh critic so I can perfect my game.

Most among ACC CBs in that span pic.twitter.com/ADnZa8MDWs

The Spun: What’s your mindset each snap?

The Spun: What is an NFL team getting in Jermaine Waller?

JW: I’m a stand-up guy. I respect myself and everyone around me. I believe in character and reputation because that takes you farther than your skills. I want to represent my team very well.

This could be the second year in a row that a Virginia Tech cornerback gets drafted. Last year, the Tennessee Titans used their first-round pick on Caleb Farley.

Waller has received a lot of praise over the past few months. Pro Football Focus has Waller graded as a top-150 prospect in this year’s draft, and that could change if he impresses scouts at the NFL Combine.