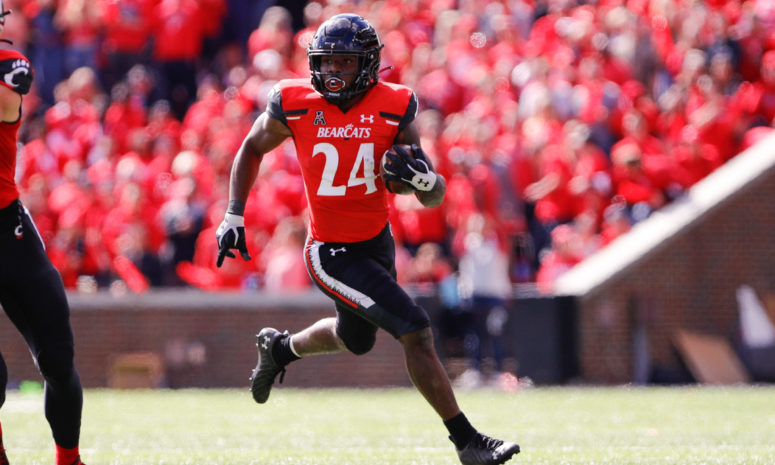 CINCINNATI, OH - OCTOBER 16: Cincinnati Bearcats running back Jerome Ford (24) carries the ball during the game against the UCF Knights and the Cincinnati Bearcats on October 16, 2021, at Nippert Stadium in Cincinnati, OH. (Photo by Ian Johnson/Icon Sportswire via Getty Images)

It’s been an eventful start to the year for Cincinnati running back Jerome Ford – both on and off the field. Not only is he preparing for the 2022 NFL Draft, he’s enjoying his time as a father.

During the week of the Senior Bowl, Ford took an Uber from Mobile to New Orleans, and then hopped on an early flight to Tampa so he could see the birth of his daughter. It was a heartwarming moment for the All-AAC running back to say the least.

As for his time on the gridiron, Ford has spent the past two months improving all areas of his game. Though he was outstanding at the collegiate level, Ford truly believes he can take his game to the next level. He wants to prove that he can be a dependable pass-catching running back in the NFL.

We caught up with Jerome Ford to talk about his Cincinnati career, path to the NFL Draft, the early stages of fatherhood and more.

Jerome Ford: The draft process has been long, but it’s been interesting and fun. The Senior Bowl was great too. I got to meet a lot of great people there.

I want to thank @JimNagy_SB and all of the senior bowl staff for giving me the opportunity to compete against the best football players in the nation. I wasn’t able to play in the game because my daughter was being born. #GirlDad pic.twitter.com/jHyOqV8dI7

The Spun: You recently had a daughter. I wanted to ask, how is early fatherhood treating you?

JF: It’s been great, honestly. It’s something new for me, but I’ve been having fun.

The Spun: What was it like getting an invite to the NFL Combine? And what are you hoping to show there?

JF: Getting an invitation was great. I guess you can say it was a dream come true. As far as being there and what I want to show, I want to prove that I’m a great football player with a great personality. Whatever team drafts me will be in good hands.

The Spun: You had an outstanding career at Cincinnati. Do you have a favorite moment from your time there?

JF: Winning the AAC Championship was one moment that sticks out most to me from my time at Cincinnati.

The Spun: When the team found out it was making the College Football Playoff, what was the initial reaction in the locker room?

JF: I think we were like, “Finally, we’re being recognized. So let’s go out there and show them why we should’ve been in this conversation a long time ago.” That was our approach to it.

The Spun: What was it like playing for Luke Fickell?

JF: It was great being around a coach who is so personable. He practices what he preaches to the players. It was a great experience playing for him, and if I could, I’d do it again.

Jerome Ford has hit the end zone FOUR TIMES in just the first half for @GoBearcatsFB 😳 pic.twitter.com/LU0fWnLo8Z

The Spun: Which running backs do you like to study?

JF: Alvin Kamara, Christian McCaffrey and Nick Chubb. Those are the three running backs I love to watch.

JF: I think the best part of my game is my versatility. If I could improve on something, it’d be route-running and pass-catching. All the good running backs in the league are able to play three downs and run routes out of the backfield. If I want to be in the league for a long time, I need to make sure I get better at that.

The Spun: What has been your motivation throughout this process?

JF: My genuine love for the game. I’ve been playing since my days in elementary school. I don’t want to stop – I just love to play football. It gives me the opportunity to provide for my family, which is also a plus. I’m obviously happy to be here, but I’m not done yet. I still have a lot more work to do.

The Spun: What is an NFL team getting in Jerome Ford?

JF: You’re getting someone who is a great person and great teammate. I’m always asking questions so I can get better.

Ford will get to showcase his pass-catching skills this week at the NFL Combine. If all goes well, he could cement his status as one of the top running backs available in this year’s class.