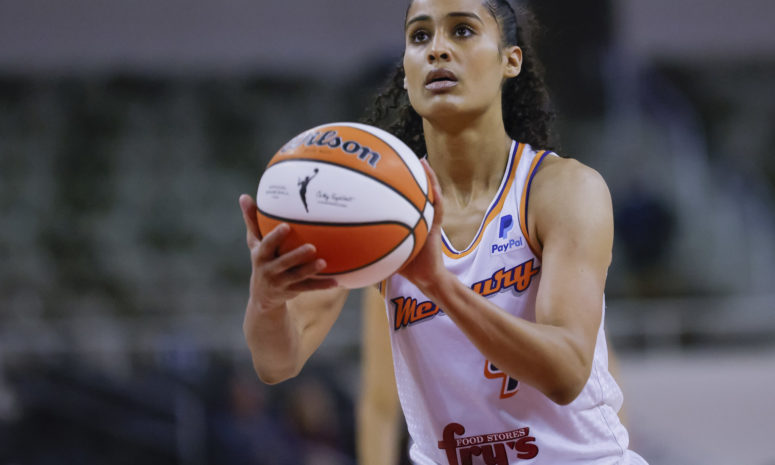 INDIANAPOLIS, IN - SEPTEMBER 04: Skylar Diggins-Smith #4 of the Phoenix Mercury shoots a free throw during the game against the Indiana Fever at Indiana Farmers Coliseum on September 4, 2021 in Indianapolis, Indiana. NOTE TO USER: User expressly acknowledges and agrees that, by downloading and or using this photograph, User is consenting to the terms and conditions of the Getty Images License Agreement.(Photo by Michael Hickey/Getty Images)

It’s been just under two months since Skylar Diggins-Smith played in the WNBA Finals for the first time.

Diggins-Smith’s Phoenix Mercury fell to the Chicago Sky in four games, but that doesn’t overshadow the magical run it took for her shorthanded team to get there. Now, Diggins-Smith is getting ready for a new WNBA season which will showcase 36 games, four more than the previous year.

We spoke to the five-time All-Star about her 2021 success, what she learned transitioning from college to the pros, the pay gap between the NBA and the W, Kobe Bryant, and her partnership with Clorox. 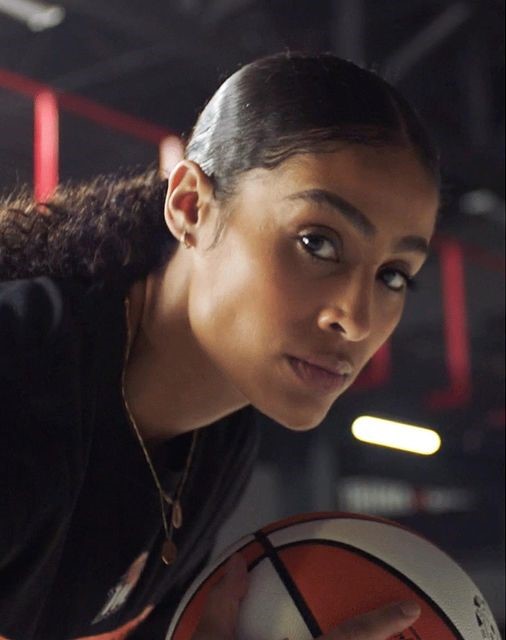 The Spun: You enjoyed so much success this past year between winning an Olympic gold, an all-WNBA selection and a finals run. Which accomplishment would you say you’re the most proud of?

Skylar Diggins-Smith: That’s a good question… It really was just a culmination of all the work you put in. For sure, the Olympic gold medal was special. Even though I didn’t have a big role on that team, just being on that stage and that type of environment… The Olympics were so unique this year. Just to experience that really lit a fire underneath me to really want to come back and get better and make that finals run. I would say that moment is something I could cross off like a childhood box of a dream like that. That was definitely one of the best highs.

The Spun: What was the biggest thing you think you learned going from college to being in the WNBA?

SDS: When you’re in college, players look good. But, you have to remember they’re playing against other college players. When you get in the W… I had somebody that was 20 years older than me playing. These are seasoned veterans that have been playing this game for a long time. So it is a learning curve. There’s a time in there where the game has to slow down, if you will. Where you can kind of see things happening and start to make these reads. Just really start to come into your own. You have systems that you were a part of in college that may be different from the system that you’ll be in, in the league.

The fouls that you might’ve been getting in college, you’re not getting them as a rookie. Even if you was the best. You have to earn that respect. Experience is the best teacher [laughs]. You know, you get your ass busted, you get back up, you go again and you learn how to compete and find your own in this league… I definitely think it takes time, a lot of it has to do with fit. Personally, I think that’s why I played some of my best basketball, being in [Phoenix’s] environment. It really is just all about fit and being in places that allow you to thrive and flourish in your “natural” positions.

The Spun: Speaking of the WNBA, you’ve long been outspoken when it comes to the pay gap between the NBA and the W. When you look at how much the women’s game has grown over the past two decades, is change on the horizon?

SDS: Yeah, I think we’ve definitely made a lot of progress. If you think about our league in comparison to other leagues in their 25th year, I’d say we’re doing a pretty good job. Obviously, we understand some of the challenges that we have. We’re still trying to get the coverage, the exposure, all those things. Kind of like the chicken and the egg. You have to put in money and invest money, for us to be able to make money and be on these platforms, and contracts to go up, and all these big partnerships and sponsorships. But it really does start with brands. How our league is covered, telling some of these stories. Really just having people who are invested into the future of sports.

Our popularity went up this year: jersey sales, jersey searches, people watching our games. Because if you put it out there, and people don’t have to be investigative agents to find a game [laughs], people will watch. I think the best thing about our progress is that the product is the best it’s ever been, in my opinion. And if you have a good product, it’s not hard to sell. That’s why I appreciate brands like Clorox. Being on that stage, having a national TV commercial, showing at the times it was and slots… People getting to see us as women and moms wearing that other hat, telling those stories. That’s a lot of the things that they do on the guys’ side. They make them superheroes and almost otherworldly.

People don’t understand the balance of me having to change a diaper and read a scouting report [laughs]. I just think there are stories out there that are obviously not being told. And it starts with us just continuing to try to fight for that coverage. Progress has definitely been made and shoutout to our leadership. Nneka Ogwumike, she was the president in constructing our new CBA. But we know we’re not where we want to be but we’re not where we used to be. And we’ve definitely made strides.

ICYMI: The @phoenixmercury had an incredible run this season 🏀

The Spun: What would you say your biggest focus is for your offseason heading into 2022?

SDS: I’m just trying to continue to sharpen my tools. I don’t really see a lot of changes that I want to make, of the things that I can control. I was pretty healthy last year. Obviously, our team had some injuries and some other things. Diana [Taurasi] missing half the games, Kia Nurse tearing her ACL right before the finals… A lot of things that other teams had to deal with as well. Everybody had a moment where it was like “Damn if we had this, if we had that…” But really for me personally, just trying to do my part and come in, stay healthy, and just be ready to compete and pick up right where we left off. Getting some opportunities to be in the gym with some of my teammates this offseason, just kind of staying close. That’s really what I’m working on. Just continuing to sharpen my skills. Continuing to work on my three and finishes at the rim, midrange game, just all of it.

The Spun: Going back to the growth of the women’s game, one of the people who was tremendously supportive of the WNBA was the late Kobe Bryant. His influence can still be felt across the basketball world… Do you have a personal Mamba memory that you’re particularly fond of?

SDS: I have a ton of memories. When I first joined Nike, I was shooting something on one side and he had a set on the other side. And I’m just coming in, this is my first year out of college. So my eyes are THIS BIG [smiles]. So I got a chance to meet Kobe and be in LA and just that whole environment… I’m from Indiana, you know what I’m saying? It was like “We’re not in Kansas anymore,” [laughs].

So I went to LA and just got to meet him and be on his set and I had that as the first picture on my Instagram for the longest. We took a flick and I’ll just never forget that moment because he was just so down to earth, he didn’t have to take that time. And then moving forward we would work together through different campaigns and whatever with Nike and cross paths there. Also his games, we would always try to stop at his games and our connection through Body Armor.

He really was instrumental in getting that brand off the ground. His vision, his investment, and he would call me about the commercials. He was just so serious about these commercials! [Smiles] he wanted to get them together. And really, obviously it was his investment, but a lot of his leg work to make sure we were coming off how we wanted to that turned Body Armor into what it is today. So, I definitely remember those conversations and just him always being so passionate. And competitive! In everything! On and off the court. He’s one of my inspirations in this game and has been ever since I picked a basketball up.

The Spun: Who would be your all-time WNBA starting-5?

SDS: Oh my gosh! That’s tough. That’s tough and that’s unfair [laughs]. But I would say Lisa [Leslie] at the 5, Tina [Thompson] at the 4, [Sheryl] Swoopes at the 3, [Cynthia Cooper-Dyke] at the 2 and Dawn [Staley] at the 1. But that’s just like my all-time… You know it’s other players that are still playing: Diana [Taurasi], Sue [Bird], they’re not retired. I’m talking about our legends that have retired and have moved on. You know… who’s messing with that top-5? [Smiles]. But I’ve got a G.O.A.T. on my team that wouldn’t be a bad fit in there as well.

Diggins-Smith is entering her third season with the Phoenix Mercury. The do-it-all playmaker was the third overall pick in the 2013 draft after a four-year standout career at Notre Dame, where she became the first player in program history to reach 2,000 points, 500 assists, and 500 rebounds.

Over eight WNBA seasons, Diggins-Smith has career averages of 16.3 points, 4.9 assists, 2.8 rebounds and 1.3 steals per game.