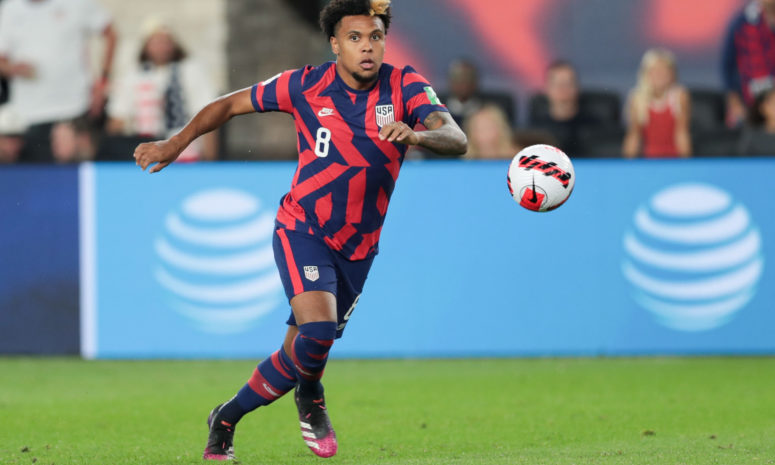 COLUMBUS, OH - OCTOBER 13: Weston McKennie #8 of the USA chases down a ball during a game between Costa Rica and USMNT at Lower.com Field on October 13, 2021 in Columbus, Ohio. (Photo by John Dorton/ISI Photos/Getty Images)

In 2016, a 17-year-old American soccer wonderkid named Weston McKennie signed with Germany’s Schalke 04, where he quickly emerged as a force to be reckoned with in the midfield.

Born in Texas and raised in Germany, McKennie cut his teeth in soccer with local German clubs before returning to the United States as a young teen. He spent seven years with FC Dallas’ academy before choosing to go pro.

One year later, McKennie made his debut for the USMNT and scored a goal in his very first appearance. A year after that, he became one of the few Americans to score a goal in the Champions League. And just last year, he joined Italian powerhouse Juventus – becoming the first American to sign with the storied club.

To date, the 23-year-old midfielder has 13 goals and seven assists in 134 games between Juventus and Schalke. At the international level, he has seven goals in 27 caps for the USMNT.

Weston McKennie has also been a prominent voice for social justice. Following the murder of George Floyd in 2020, he wore an armband that said “Justice for George” during a Bundesliga game.

Since 2020, McKennie has thrived when the lights shine brightest. He’s scored goals against Barcelona in the Champions League and against Mexico in the CONCACAF Nations League, and had a key assist in last year’s Coppa Italia Final win.

The spotlight will be on Weston McKennie again in just a few days. He’s been named to the 25-man roster for the USMNT’s upcoming World Cup Qualifying matches against Mexico and Jamaica.

We got a chance to speak with the Juventus and USMNT midfielder to discuss how he plans to get these crucial points, his rising stardom, his World Cup dreams and his recent partnership with Six Star Pro Nutrition to help stay in shape.

This interview with Weston McKennie is made possible by Six Star Pro Nutrition.

The Spun: First off, congratulations on making the 25-man roster for the upcoming World Cup qualifiers. Two big qualifiers this month: You’ve got the big one against El Tri (Mexico) in Cincinnati, then the road game against Jamaica. How does the US come away with six points this month?

Weston McKennie: The best way to come out with six points is to get three points first. We definitely adapted a new standard, a new model, we just want to take it game by game and focus on just one game at a time. Because whenever you think “Let’s get six points, let’s get nine points, let’s make it a nine-point window,” you automatically develop pressure for yourself and you aren’t just thinking “get three points first.” So I think that’s how we’re gonna get six points – by getting three points (against Mexico) first.

The Spun: Speaking of El Tri you did record that massive goal against Mexico (in the Nations League Final) which is now listed in your Wikipedia page. Does it ever occur to you that your whole life is being chronicled on a website like that for everyone to see? You’re famous now!

WM: It’s cool, but the people chronicling it are only doing it on my career. I have my whole life chronicled in my head – the moments that are big in my life (are there). Obviously my fanbase and the people that follow me, their biggest moments are probably coming from my soccer career.

The Spun: You’re with Juventus now – the biggest club in Italy. How fluent are you in Italian by now?

WM: (laughs) That’s something I’ve struggled with here. The language is hard and with the schedule that I have right now I’m exhausted most of the time and I don’t really wanna sit for an hour-and-a-half to two hours trying to learn. So I’m kind of doing it the same way when I moved back to Germany (and learned German), I’m just listening, learning and asking – and just applying it over and over again until I have it on lock.

And then, obviously, scoring for the USMNT is always special since you have a whole country behind you. You’re representing something bigger than just one. And you always want to make your country proud for sure.

The goal, the celebration 😍 pic.twitter.com/ycOTpt8Ym0

The Spun: This question is one that may generate more controversy than any other: Pro/Rel for the United States?

The Spun: You probably don’t want to stick your hand in that hornet’s nest, right?

The Spun: What one word would you say best describes Weston McKennie on and off the field?

I’m not going to make my opinion small just because people believe
that I should just play soccer. #ReadyForChange @adidasfootball#createdwithadidas pic.twitter.com/KrQpMGdNML

The Spun: You’ve gotta let your fellow Americans know: What are your favorite sports teams (outside of soccer)?

The Spun: Okay. Are you cool with it being called “the Washington Football Team” or do you miss the old name?

The Spun: Time for the speed round – Batman or Spider-Man? 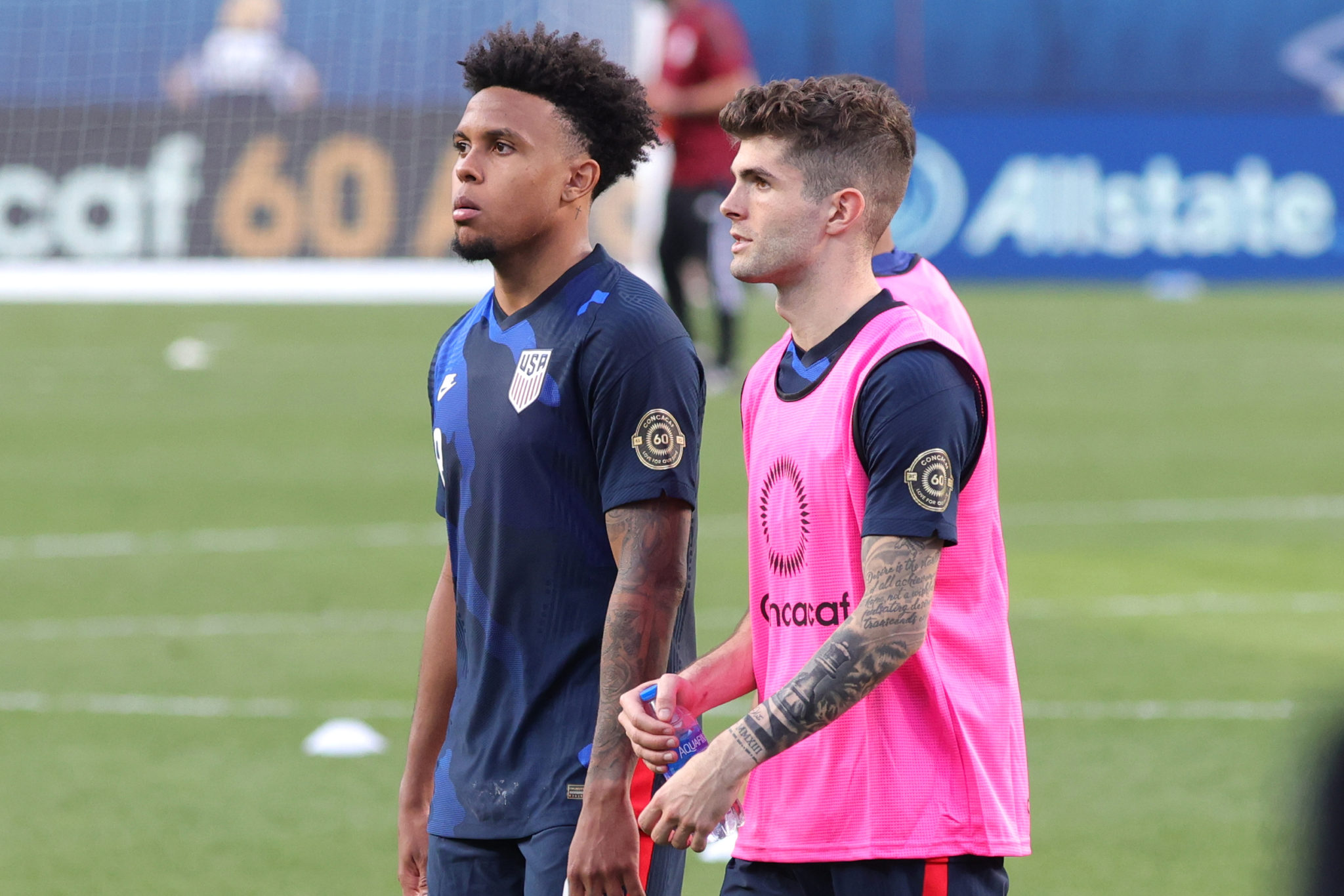 The Spun: That’s a reasonable answer. Star Wars or Lord of the Rings?

WM: Lord of the Rings. (whispers) I don’t like Star Wars.

The Spun: Call of Duty or Battlefield?

The Spun: PlayStation, XBox or PC? Be careful how you answer this one.

The Spun: If you could insert yourself into any anime, which would you want to be in?

The Spun: You did mention that you prefer PlayStation over the others. Do you play FIFA?

The Spun: Great – then who among you and the people you know are the best at it?

WM: Oof. Wow. I don’t even know. To be fair, we haven’t played FIFA at the national team in a long time. I’m just gonna say myself.

The Spun: Hell yeah. Do you also do the Ultimate Team, buy the team packs and stuff like that?

WM: Nah I stopped doing that once I realized I’m never packing a good player.

The Spun: Do you think the FIFA Ultimate Team mode is gambling, as some have argued?

WM: Yes and no. You can say it’s gambling because you’re putting money into it to see what type of player you get out of all the players you can get. It’s like putting money on a number… But at the same time I haven’t had any luck with it (laughs), so I stopped. Just got frustrated. 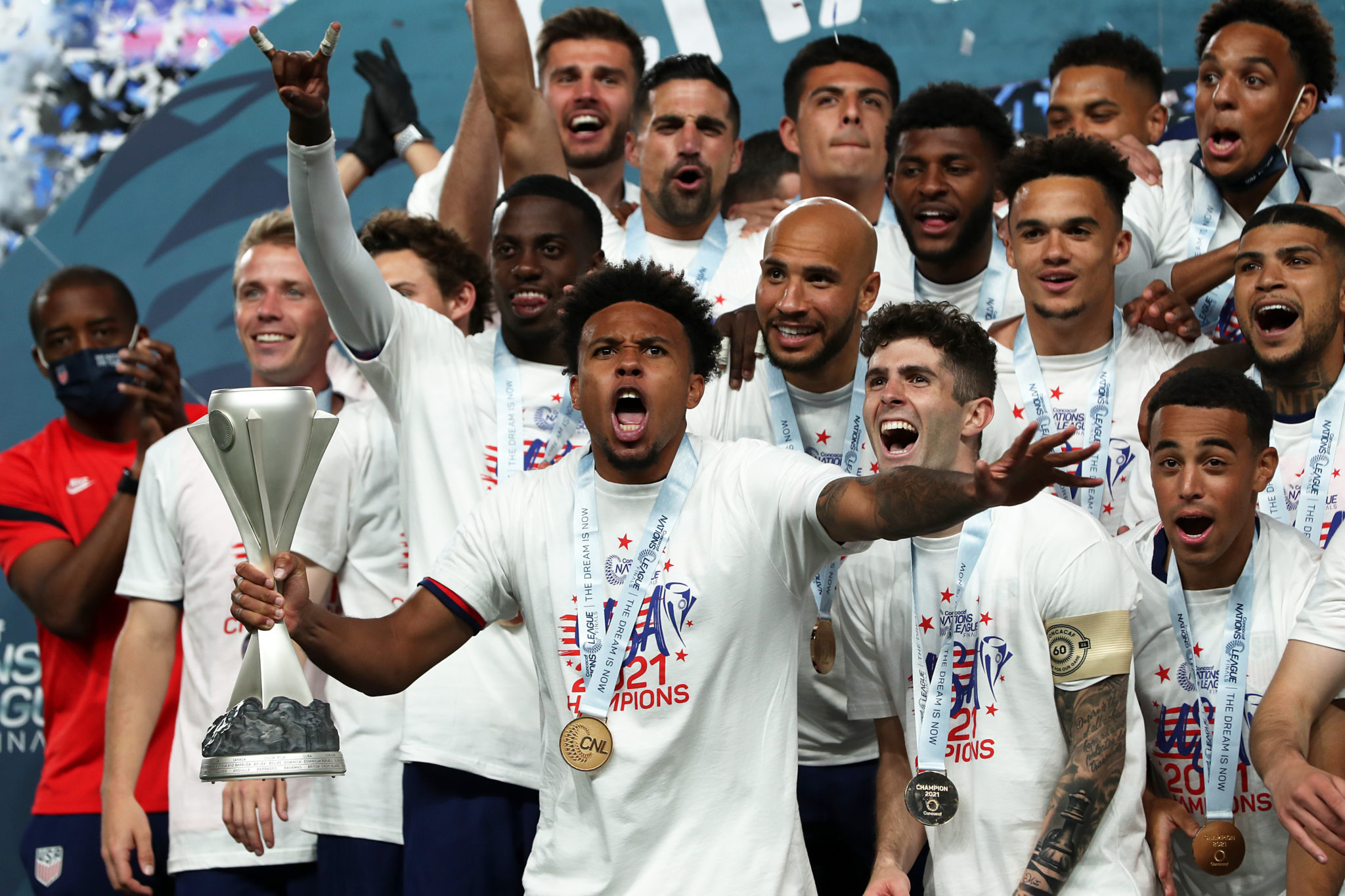 The Spun: Let’s see if we can’t stir the pot just a little bit more. Who would you have on the Mt. Rushmore of American Soccer? This can combine both genders, coaches, players, contributors – the whole spectrum.

WM: Yeah I feel he’s very underrated and not very not recognized for what he actually accomplished and what he did throughout his career. He’s very under the radar.

The Spun: Fair enough. Let’s have you use your imagination here. Feel free to close your eyes for this one: The World Cup has just ended. The United States has won the World Cup and Weston McKennie is headed home, trophy in hand, to celebrate. Where do you go to celebrate the win and who do you invite?

WM: Hmm… am I able to invite anyone? Like, do they have to come?

The Spun: Absolutely. The US just won the World Cup. I think they’d probably offend the entire country if they didn’t accept!

WM: Okay, I would of course invite my family and friends. I’d probably invite Travis Scott – big hype man. I would probably invite Clint Dempsey – he can throw a couple of freestyles on the microphone. He’s crazy at freestyle.

And I would probably invite Barack Obama – just because I wanna see if his basketball skills are as true as they say they are.

Good to be back out there with the guys🔴⚪️🔵 and also to share this powerful moment with them!!! #BeTheChange pic.twitter.com/7CHLuNNWNz

The Spun: And where would you celebrate? You can go anywhere.

WM: Depends on what I’m in the mood for. If I wanna go party, maybe I go to Miami. If I really wanna have just a good, nice time, I’d probably go to Venice Beach. I love Venice Beach.

The Spun: Just those two spots?

WM: Yeah I love the coast. I love Dallas (my hometown) to death but if I could be on the coast, California or Florida, I’m good. The water? Perfect.

The Spun: Finally, you’re a professional athlete – you’ve been training rigorously to do this since you were a pre-teen. You’re now partnering with Six Star Pro Nutrition, who specialize in sports dieting and nutrition. What’s your diet like to maintain your quality of play?

WM: My diet’s always something that I’ve struggled with a little bit. Over the years it’s something I’ve gotten better at, such as knowing that it’s not just the food you eat. I was very stubborn growing up. My old clubs would leave my protein shakes out or would leave me hydration packets to dump in my water after a game, or pre-workout before going out to training.

But as I’ve grown I’ve learned that those things are only going to help you be more prepared, be more successful and Six Star is definitely one of those partnerships that helps me succeed in those ways. It also tastes good to me. A lot of other products, some of them don’t taste true to what they say. They don’t taste like they say they do.

I have a sweet tooth. So it’s definitely a partnership that I’m happy to have and I’m happy they have me on. Because at the end of the day, it’s a partnership so that we can succeed together and take it to the next level. 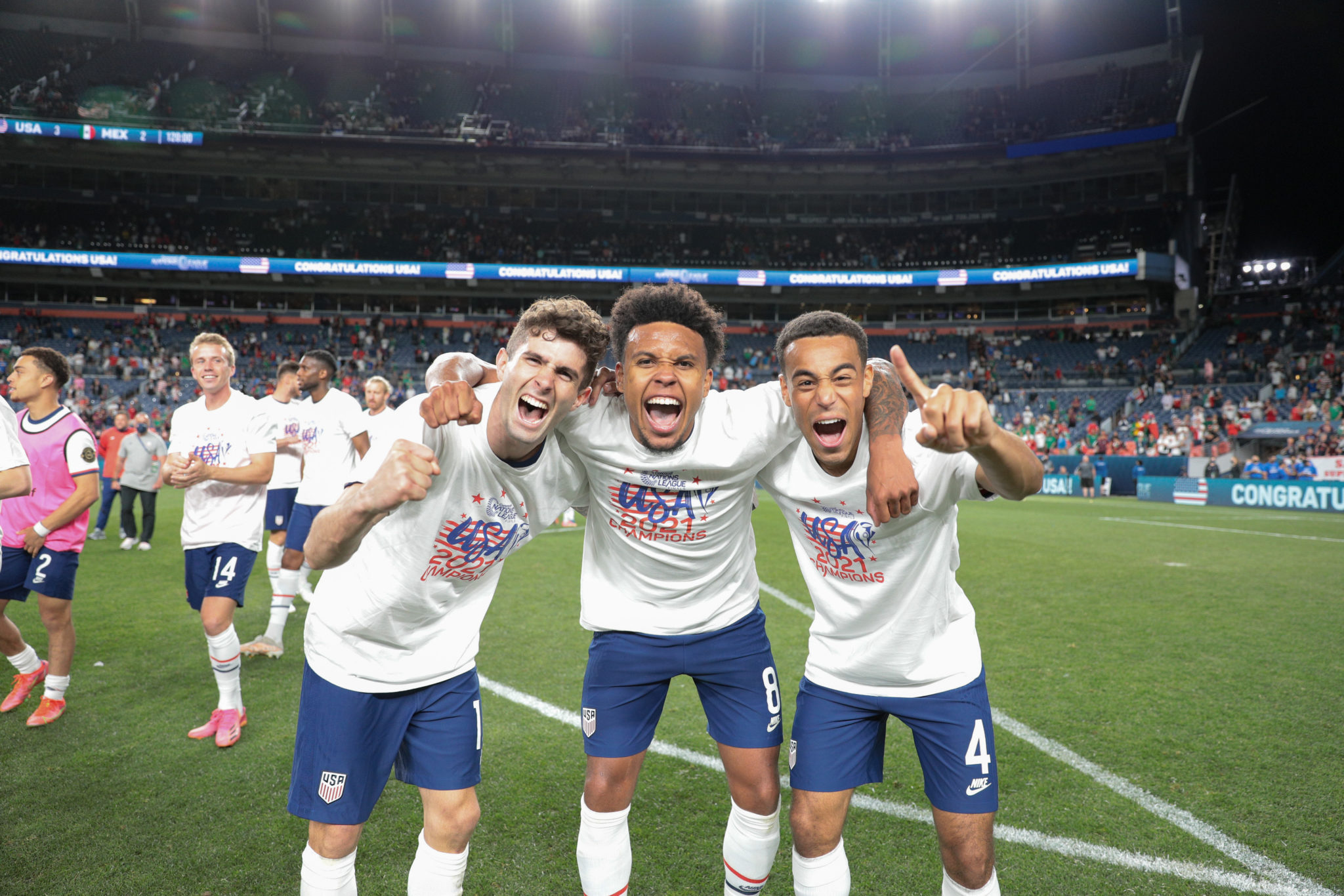 The USMNT sit second on the CONCACAF World Cup Qualifying table with 11 points. The top three teams qualify for the 2022 World Cup in Qatar while the fourth-place team must win the inter-confederation play-offs in order to advance.

On November 12, Weston McKennie and the USMNT will head to TQL Stadium in Cincinnati to take on arch-rival Mexico. Four days later on November 16, the Stars & Stripes head to Kingston, Jamaica for a showdown with the Reggae Boyz.

If he plays, McKennie will no doubt be throwing everything in his considerable arsenal at both rivals. Their World Cup hopes depend on it.