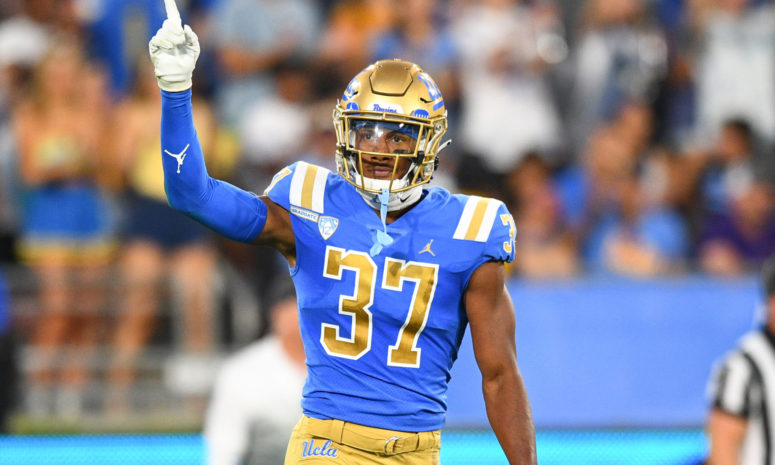 PASADENA, CA - SEPTEMBER 04: UCLA Bruins defensive back Quentin Lake (37) celebrates during a college football game between the LSU Tigers and the UCLA Bruins played on September 4, 2021 at the Rose Bowl in Pasadena, CA. (Photo by Brian Rothmuller/Icon Sportswire via Getty Images)

For UCLA defensive back Quentin Lake, football is more than a game. It has shaped him into the very person and player he is today.

Lake, the son of Pittsburgh Steelers legend Carnell Lake, knows that he has large shoes to fill. He also understands that it’s a privilege to play in the NFL. That’s why he’s not taking a single moment of his journey for granted.

Regardless if he’s competing at the Shrine Bowl or preparing for the NFL Combine, Lake is enjoying every step of this draft process.

We caught up with Quentin Lake to talk about his UCLA career, future in the NFL, why football motivates him and much more.

The Spun: What has been your favorite part of this whole journey?

Quentin Lake: I would say the week of the Shrine Bowl was definitely a highlight. Being able to show teams that I can compete and play at a high level was big for me. I definitely think I helped my stock that week. You get a lot of feedback about your game, which I thought was awesome. You get to enjoy that process while getting tips and pointers about your skill.

Reviewing @ShrineBowl safeties and one of the biggest "risers" during 2022 season was also among the most impressive safeties at the Shrine Bowl: @UCLAFootball's Quentin Lake

Here's two plays (first play shown with two angles) of Lake running the route for the WR. So impressive. pic.twitter.com/2OcHXdFsrx

The Spun: Next up for you is the NFL Combine. What are you hoping to show there?

QL: It was definitely a surprise getting the invitation. I called at first and they said I didn’t receive an invite. The day I got to Las Vegas for the Shrine Bowl, I got an email saying I was invited. I was happy about that because it’s a huge accomplishment.

The Spun: You’ve shown great lateral movement and body control. Would you say those are your best attributes? And if not, what is?

QL: I would say it has to be my football IQ or ball skills. I’d go with my football IQ, though. I come from a lineage where my dad played. He has been a big resource for me when it comes to understanding the game. I think with football IQ comes instincts. I have the ability to put guys in the right positions to make plays, which in return allows me to make plays myself. Being able to pick up playbooks quickly, adjust, and know football in general has helped me a lot. I think that might be my biggest strength, being able to adapt to different situations because I understand the game so well.

Working against WR Josh Johnson from Tulsa, Lake puts on a clinic on planting, rotating, and staying with the play to break up the pass. This is insanely difficult to do. @SapientFilm pic.twitter.com/OdyldoUgek

The Spun: Who was the toughest player you faced at UCLA?

QL: You got to bring your best all the time, there’s no doubt about that. I would say the matchups that were big-time were against Amon-Ra St. Brown. I had to go up against Drake London, who is expected to be the No. 1 wide receiver in this draft class. I had a chance to go up against CeeDee Lamb and Marquise Brown during my sophomore year. Those are guys who presented tough matchups. I’d also pick a guy on my own team who I think will get drafted, Kyle Phillips. Although he’s not an opponent, going up against him every day made me better. He’s kind of like a Cooper Kupp, and I don’t even like comparing him to other guys because he’s so special. There were probably some other names that I missed, but those come to mind.

The Spun: When you look back at your UCLA career, what do you think?

QL: That’s a good question. I would say I’ve grown a lot, and I think I capitalized on every situation I’ve been in. Freshman year, I had the option to redshirt or play. I decided to play and put special teams film up. There wasn’t a crazy opportunity for me in terms of being a starter the first year, but it was a chance for me to play. In my second year, I had the chance to showcase my talents. In 2019, I had some buzz surrounding my name. I played well in the first few games, but then I suffered an injury. I thought I showed more skills in 2020 despite it being a COVID year. Overall, I think I’ve shown teams that I’m getting better and better each year. I feel like I just had one of my better years. Whatever question marks people had for me, I checked off. I showed that I’m a competitor.

The Spun: UCLA continues to grow under Chip Kelly. Do you feel like you’ve left the program in better shape than you found it?

QL: It’s been a long ride at UCLA. We had a coaching change, which was great. I love Coach Kelly and the staff that he brought in. Over the past few years, we’ve come together as a brotherhood and a unit. We’ve left behind the idea that in order to win you need to be a single unit. You need to believe in the plan that Chip Kelly brought to the program. We were doing extra film work, extra time in the weight room, and spent time off the field to make sure we can bond.

The Spun: Which defensive backs do you like to watch on film?

QL: There are a lot of them to study in the NFL. Two of them at my position are Justin Simmons and Kevin Byard. Simmons has been a great player for the Broncos. He has a similar body type, super athletic, high IQ guy and knows what position to be in.  Kevin Byard is a similar type of play. He’s super smart, understands the defense, knows the ins and outs. Those are two guys I look for when it comes to finding complete players. In terms of raw athleticism and guys I like to watch, I actually like to study cornerbacks. I look at Jalen Ramsey, A.J. Terrell and Stephon Gilmore. There are so many more names I can mention, but those guys have been really successful.

.@UCLAFootball safety Quentin Lake is making a nice late-season push for this year’s @seniorbowl. Plays like this rangy one-handed pick vs. USC have gotten NFL’s attention too. One scout sent us TV replay of it on Saturday. We see you, @quentin_lake!#TheDraftStartsInMOBILE™️ https://t.co/E8m9GwPxJ6 pic.twitter.com/yRrwhmXx03

The Spun: What part of your game are you working extremely hard on to improve?

QL: I think it’d be having that hit stick. I’m a great tackler – I never had tackling issues in college. But I want to be able to have those Kam Chancellor type hits, or just have assertive hits in general. I was able to show that here and there last season, but I’d love to show it more on a consistent basis. I have the footwork, ball skills, IQ and technique to play well. But I’d love to be able to lay the boom at a consistent rate.

The Spun: What is an NFL team getting in Quentin Lake? And what has been your motivation throughout this process?

QL: I think the biggest thing for me, and I truly believe this, is that an NFL team is getting a guy that can help off the bat. Whether that’s special teams, defense, in the locker room, I will make an impact. I want to be on the All-Rookie Team, I want to set a high standard. I feel like I’m a plug-and-play player. I can play free safety, nickel cornerback, strong safety, dime linebacker. I feel like I can play them all at a high level. I have the ability to help a team, especially on the defensive side, to win games. Let’s say I’m just a special teams player in Year 1, I’ll gladly accept that. It’s always a ‘We, not me’ mindset when it comes to this game.

As for my motivation, it’s a two-part answer. My family has made so many sacrifices to help me get to this point. I want to show that all their time and energy didn’t go to waste. They don’t think that, of course, but I want to show how appreciative I am for them. And the second reason is that football is so hard. If it was easy, you’d see millions of people in the league. But it’s tough, and that has allowed me to grow as a player and as a man. I’ve been able to develop into someone I’m proud of. The Quentin you see today is because of football. You have to make sacrifices to play this game. It’s hard, but I always appreciate a challenge. I don’t want the easy way out – that’s not how things should be.

Bruin family through and through 🐻 @quentin_lake | @UCLAFootball

Lake finished his UCLA career with 179 total tackles, 15 pass breakups and six interceptions. His production in 2021 earned him a spot on the second-team All-Pac-12 squad.

Though he’s already on scouts’ radars, Lake will have a chance to really make some noise in Indianapolis this week at the NFL Combine.