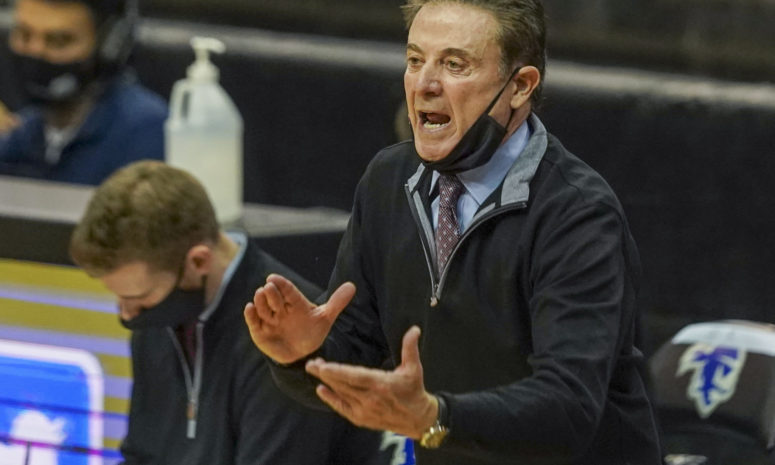 NEWARK, NJ - NOVEMBER 30: Head coach Rick Pitino of the Iona Gaels during a game against the Seton Hall Pirates at Prudential Center on November 30, 2020 in Newark, NJ. (Photo by Porter Binks/Getty Images)

Maryland is “heavily pursuing” Iona head coach Rick Pitino to be its new men’s basketball coach, according to a new report.

Pitino is the Terrapins’ “top choice,” per The Sports Junkies on 106.7 The Fan. The 69-year-old Hall of Famer is currently in his second season at Iona, and has led the Gaels to a 23-5 overall record.

Pitino brought Iona to the NCAA Tournament last season, marking the fifth program he has brought to the Big Dance. Boston University, Providence, Kentucky and Louisville are the others.

Pitino has won 805 games throughout his illustrious college basketball coaching career, though the NCAA only officially counts 682 of those victories. Louisville had to vacate its 123 wins under Pitino from 2011-15, including its national title in 2013, due to NCAA sanctions.

Pitino has taken three programs–Louisville, Kentucky and Providence–to the Final Four and won national championships with the Cardinals and Wildcats. He’s undoubtedly one of the greatest coaches in college basketball history, and landing him would be a coup for Maryland, even with the baggage he brings.

The Terrapins are looking for a new head coach after parting ways with Mark Turgeon earlier this season. Assistant coach Danny Manning has served as the team’s interim leader.