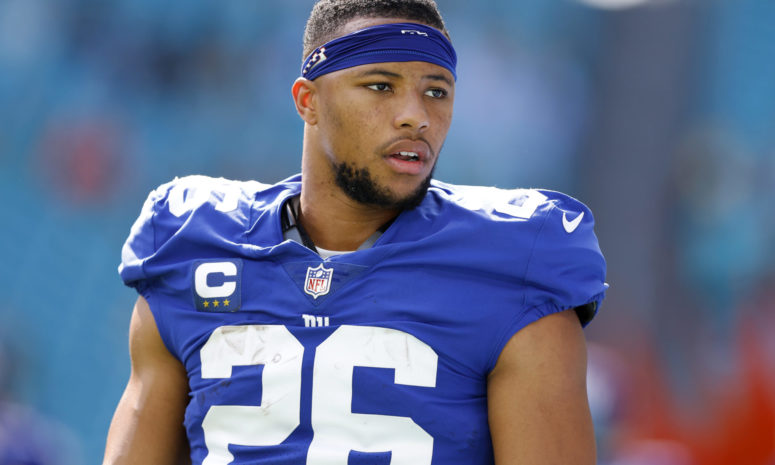 MIAMI GARDENS, FLORIDA - DECEMBER 05: Saquon Barkley #26 of the New York Giants looks on before the game against the Miami Dolphins at Hard Rock Stadium on December 05, 2021 in Miami Gardens, Florida. (Photo by Michael Reaves/Getty Images)

Nearly four years ago, the New York Giants spent their No. 2 overall pick on Penn State star running back Saquon Barkley. He was supposed to become the face of the franchise. Fast forward to 2022, Barkley has become somewhat a liability because of injuries and inconsistent play. And now, he could potentially be on the trade block.

The Giants picked up Barkley’s fifth-year option last year, meaning he’s on contract this upcoming season. However, there’s speculation the Giants would like to find a trade partner for the former college football star before he walks for free in 2023.

Giants general manager Joe Schoen was asked specifically about a Saquon Barkley trade on Tuesday afternoon. He admitted he’s open to it.

“I’m open to everything…,” Shoen replied.

Asked Joe Schoen how open is he to a trade for some of his better players, specifically Saquon Barkley:

“I’m open to everything…”

Said he’s willing to listen to pretty much anything. They have to make some difficult decisions on guys which will be coming “soon.”

A Saquon Barkley trade is practically inevitable at this point. The Giants want to get what they can for him now before letting him walk for free next year.

Fans seem to be enthused about a potential Barkley trade. It’d be a fresh start for the former Penn State star and a positive development for the Giants.

“The team that trades a 4th rounder for saquon will feel like they won the lottery,” a fan wrote.

One fan thinks the Giants could probably fetch a fourth-round pick for Barkley in return.

The team that trades a 4th rounder for saquon will feel like they won the lottery https://t.co/pzpgdDnd1Y

Should the Giants trade Saquon Barkley? It certainly appears to be in the cards for the organization.