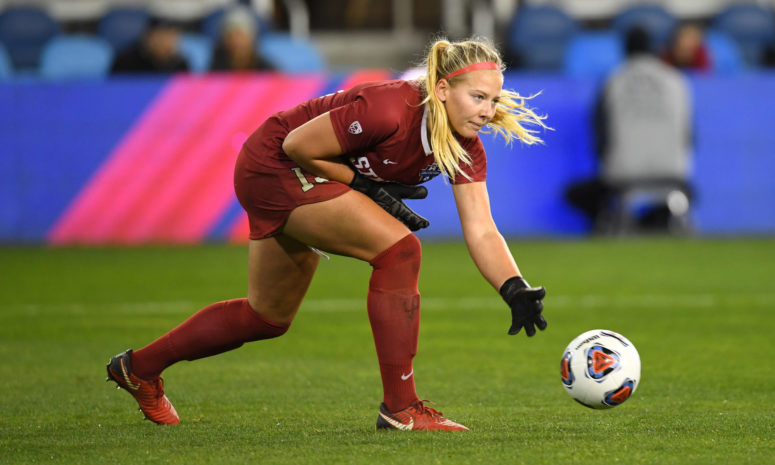 SAN JOSE, CA - DECEMBER 08: Goalie Katie Meyer #19 of the Stanford Cardinal passes the ball to a teammate against the North Carolina Tar Heels during the Division I Women's Soccer Championship held at Avaya Stadium on December 8, 2019 in San Jose, California. Stanford defeated North Carolina in a shootout. (Photo by Jamie Schwaberow/NCAA Photos via Getty Images)

Stanford women’s soccer goalkeeper and captain, Katie Meyer, passed away on Tuesday, the university announced. She was 22 years old.

Meyer is nationally known for her two critical penalty-kick saves that helped propel the Cardinal to a National Championship victory over North Carolina in 2019.

The sports world took to Twitter to react to her tragic loss. Soccer programs and fans from around the nation shared messages of love and support through this difficult time.

“The Stanford community has suffered an unimaginable loss. Our thoughts & love are with Katie’s family & friends,” Stanford Athletics wrote.

We love you, Katie. ❤️ pic.twitter.com/vkrAisQABi

Here's Katie Meyer's save to win Stanford the 2019 national championship—and her incredible celebration afterward. She made a bunch of huge saves to get them the title, and her joy in making them really stood out. Devastating news pic.twitter.com/lj8FiTGciX https://t.co/2F0Dq6P8Hp

Devastated to hear the news today about Katie Meyer. All my prayers to her loved ones, @StanfordWSoccer and the entire @GoStanford family.

Will never forget her performance in the 2019 National Championship. 💔 pic.twitter.com/u7yzG6CDDz

We join Stanford in mourning the loss of Katie Meyer. Our condolences to her family, friends and teammates. https://t.co/RdQbOxPsC7

“Katie was extraordinarily committed to everything and everyone in her world,” Susie Brubaker-Cole, vice provost for student affairs at Stanford, said in a statement. “Her friends describe her as a larger-than-life team player in all her pursuits, from choosing an academic discipline she said ‘changed my perspective on the world and the very important challenges that we need to work together to overcome’ to the passion she brought to the Cardinal women’s soccer program and to women’s sports in general.”

Meyer’s cause of death was not revealed in the announcement.

Our thoughts go out to those close to Meyer during this difficult time.