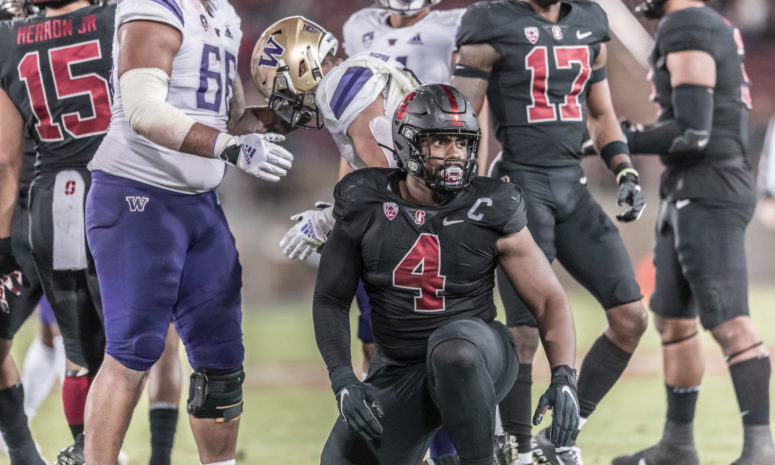 PALO ALTO, CA - OCTOBER 30: Thomas Booker #4 of the Stanford Cardinal looks to the sidelines after a play in an NCAA Pac-12 college football game against the Washington Huskies on October 30, 2021 at Stanford Stadium in Palo Alto, California. (Photo by David Madison/Getty Images)

Football is a physical sport, that’s no secret. But it also requires attention to detail, and Stanford defensive lineman Thomas Booker loves that aspect of the game.

Booker finished his Stanford career with 159 total tackles, 20.5 tackles for loss, 9.5 sacks, eight pass breakups and a forced fumble. He was an All-Pac-12 performer in his final season with the team.

Following the 2021 season, Booker received an invite to the Shrine Bowl. It would be an understatement to say he made a strong impression on those in attendance.

We caught up with Thomas Booker to discuss his Stanford career, Shrine Bowl experience, why he loves the chess match aspect of football and much more.

The Spun: How was your week at the Shrine Bowl?

Thomas Booker: Yeah, it was great. It was definitely a lot just in terms of all the interviews with NFL teams and having to learn a new system and everything in a couple of days, but it was really funny experience. I just kind of got to let loose, be aggressive, play in the backfield, all that stuff. So yeah, it was a great week for me.

The Spun: What was your reaction to getting the NFL Combine invite?

TB: Yeah, so I’d actually gotten the email around, I think, the 30th of December. That’s when I had originally gotten my invitation, but like it was today or yesterday that the official list came out. But no, it’s crazy. It’s something that I’ve dreamed about for so long. And it’s obviously a really selective group of people that are gonna be there. So to be on that list of is crazy for me. Ever since I’ve been in middle school, high school, my goal has been to get on the list and be able to go to Indianapolis. I don’t even know how to describe it. There’s just been so much work put in.

The Spun: What are you hoping to show scouts at the NFL Combine?

TB: I think at the top of my list is to show that I’m a complete athlete. I’m a big guy that can move, change directions, has really good acceleration, and fluid hips. Those are extremely valuable assets for any football player, but especially defensive linemen.

The Spun: I saw an interview of you talking about the battles in the trenches. How much do you enjoy those chess matches?

TB: That’s what makes football fun at the end of the day. It’s a violent chess match when you think about it. You can tell the guys that are keyed in on the little things, like snap counts, their own tells. It’s fun to see what your own tells are on tape. Am I putting too much weight on the foot I push off of? Am I looking inside before the snap? I love that stuff. That’s what makes the game so fun for me.

The Spun: NFL scouts have raved about your intelligence. Do you feel like that’s your greatest asset?

TB: That’s definitely one of my best assets. I’d say my ability to change direction is a big strength. I’m an adaptable player who can learn different concepts quickly. I learned in college that the quicker you pick things up, the less you have to think about it. The less you have to think, the better player you’re going to be.

The Spun: What was your favorite memory from your time at Stanford?

TB: There’s probably two or three moments. Last year’s game vs. Cal was great. That one was great. I blocked the game-tying PAT and helped us win the game. That matchup is a great contest no matter where we play. So for us to win that on the road was awesome. I’d say this past year’s win over No. 3 Oregon at Stanford. Being able to be out there and shut them down at the end was up there for me. I also loved our win at Oregon during my freshman year. It was a crazy atmosphere.

Stanford wouldn’t be Stanford without its Black student-athletes, coaches, and staff who have paved the way and continue to create a legacy every day. pic.twitter.com/CLYuAkNqAD

The Spun: With it being Black History Month, I wanted to ask you about community at Stanford and if everyone is on the same page. I know that’s a big issue right now in the NFL.

TB: I think they did a really good job. I know that student-athletes at Stanford felt like they needed a community. That’s why we created an organization called Cardinal Black. It’s a community of Black Stanford athletes that can meet to talk about whatever is on your mind. This happened around the death of George Floyd. There was so many emotions and feelings of anger and disappointment. We felt like we needed that space. Stanford has done a great job, but we still felt like we needed that community. I’m glad we’ll pass that down to future generations of Stanford athletes.

The Spun: What were those battles like at practice against Davis Mills?

TB: Of course. Davis was balling. He’s a cold-blooded killer. He’s a guy that no matter what the situation is will be calm and collected. People at Stanford aren’t surprised to see what he’s doing. That said, I’m extremely proud of him.

The Spun: Which defensive linemen do you love to study?

TB: It’s a bit of a cliche answer, but I’ll go with Aaron Donald. He can wreak havoc with his three-technique or five-technique. He can get off blocks in the runs. I want to be able to be effective no matter where I’m aligned. Another player I love to watch is Fletcher Cox.

The Spun: What do you need to improve in order to unlock your game even more?

TB: I’ve been working on is my ability to pass rush in between downs. That’s something I wanted to show at the Shrine Bowl.

The Spun: What is an NFL team getting in Thomas Booker?

TB: I would say you’re getting an extremely determined football player that can adapt to any system he’s in. I run sideline to sideline no matter what. I’m also going to make an impact for the organization off the field. I’m going to be hard to take off the field because I’m a three-down player.

Another DT that I like for the Chargers that’s at the @ShrineBowl is Stanford’s Thomas Booker.

Versatile defender with the first step and short-area quickness + arm length to press, leverage and maintain his gap.

Ideal 4i in Brandon Staley's defense.pic.twitter.com/tzpDVeee8q

Booker should leave coaches and scouts in awe later this year when he meets with teams at the NFL Combine.

Stanford fans will find out where Booker will resume his career in the spring.