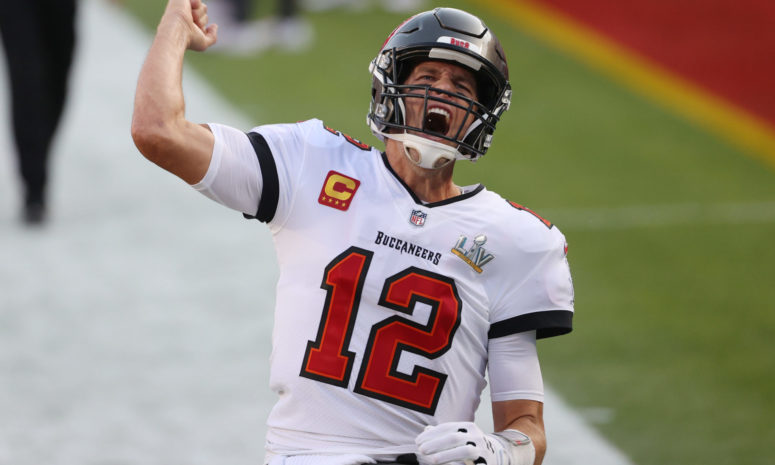 TAMPA, FLORIDA - FEBRUARY 07: Tom Brady #12 of the Tampa Bay Buccaneers shouts as he takes the field before Super Bowl LV against the Kansas City Chiefs at Raymond James Stadium on February 07, 2021 in Tampa, Florida. (Photo by Patrick Smith/Getty Images)

Maybe, just maybe, Tom Brady isn’t ready to walk away from the NFL just yet.

While on Fred Couples’ SiriusXM radio show this week, Brady was asked about his future. His response pretty much left the door open for a potential return.

“I tell you, I wish I had a clear vision of what the future holds, but I think for me, there’s a lot of great things and a lot of great opportunities that I know I said right after football season I was looking forward to spending time with my family,” Brady said. “And I’ve done that the last five weeks. And I know there’ll be a lot more of that, too. So, you know, I like staying busy, that’s for sure. I played a little bit of golf and I’m actually gonna see my parents tonight, which will be a real highlight for me on their turf. I’ll be sleeping in the same bed I slept at when I was a kid.

“I don’t think my mom knows I’m coming home yet. So it’s just between dad and I, it is a little bit of a surprise. So looking forward to that, looking forward to some golf in the next few days and some more family time, and then we’ll figure out where we go from there.”

The last part of Brady’s answer is very interesting. Where does he go from there?

Well, some NFL fans believe he’ll try to come out of retirement.

“Kyle Shanahan and Tom Brady both in the Bay Area? Wonder where they’re going to play golf together? (Half sarcasm),” Akash Anavarathan of Niners Nation said.

Kyle Shanahan and Tom Brady both in the Bay Area?

Wonder where they’re going to play golf together? (half sarcasm) https://t.co/TrHWy8ZF5x

“This doesn’t sound like a guy that’s staying retired,” Dan Moriarty said. “Shanny didn’t go to the combine and now Brady is in the Bay Area to ‘see his parents.'”

This doesn’t sound like a guy that’s staying retired.

Shanny didn’t go to the combine and now Brady is in the Bay Area to “see his parents.” 👀 https://t.co/pJFHSQ9gSX

“Brady spent 5 weeks with his family and said nope. He’ll play this year for sure,” one fan said.

Brady spent 5 weeks with his family and said nope. Hell play this year for sure https://t.co/bX67PMfFVR

Brady proved this past season that he can still play at an MVP level. That doesn’t mean he’ll come out of retirement, though.

Do you think Brady will return to the NFL this year?