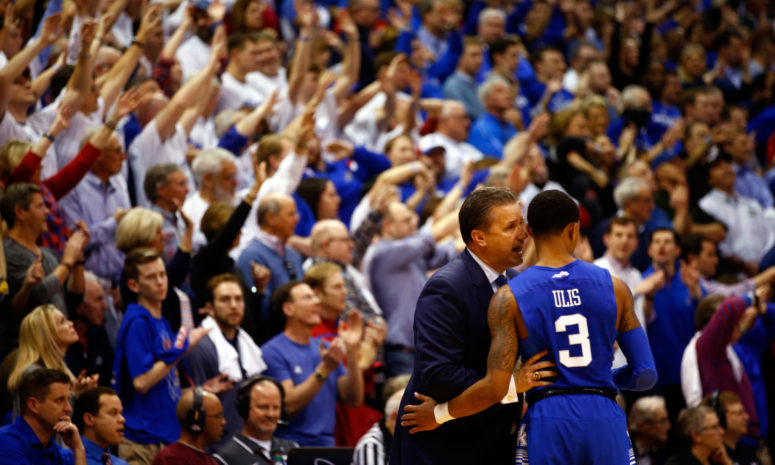 LAWRENCE, KS - JANUARY 30: Head coach John Calipari of the Kentucky Wildcats talks with Tyler Ulis #3 during the final minutes of overtime in the game against the Kansas Jayhawks at Allen Fieldhouse on January 30, 2016 in Lawrence, Kansas. (Photo by Jamie Squire/Getty Images)

“One of my most competitive players, whose will to win inspired me, had a car accident in Michigan,” Coach Cal tweeted. “We’ve been in touch, but let’s send some prayers, #BBN. He’s had some setbacks and fate has intervened a few different times. I’m here for you @tulis3 until the wheels fall off!!”

Ulis is very appreciative of Coach Cal’s message and support. The former coach-player duo clearly have a strong relationship.

“Thanks coach 🙏🏾🙏🏾 you are greatly appreciated,” Ulis responded.

Thanks coach 🙏🏾🙏🏾 you are greatly appreciated https://t.co/3CKPzcHGHG

Tyler Ulis was one of Calipari’s best players. He won the Bob Cousy Award in 2016 and was a first-team All-American.

Calipari recently spoke about Ulis and his special ability as a playmaker.

“From John Wall and Eric Bledsoe to Brandon Knight to Isaiah Briscoe and Jamal Murray. Marquis Teague on my NCAA championship team,” Calipari said last year. “You can go even further, Andrew Harrison, Ashton [Hagans] but you have to look at Tyler Ulis in that grouping. Even with his size, didn’t care. Never thought of him as anything but a big-time guard. He was unique in that.”

Luckily, it sounds like Tyler Ulis is recovering just fine from his recent car accident. We wish him well and hope for a speedy recovery.