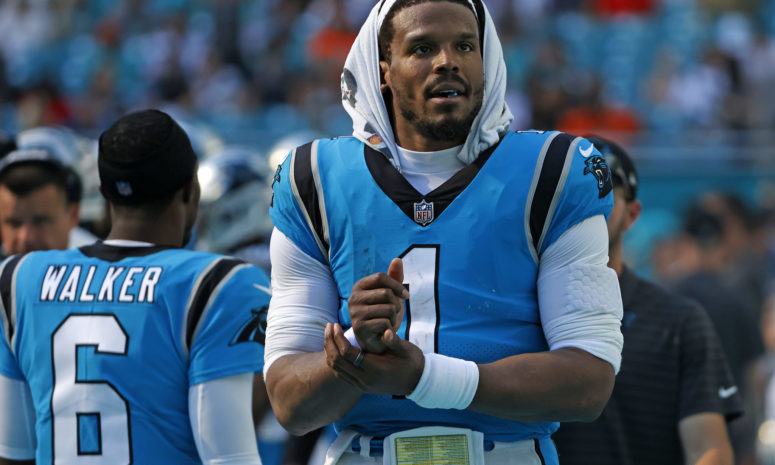 MIAMI GARDENS, FLORIDA - NOVEMBER 28: Cam Newton #1 of the Carolina Panthers looks on from the sideline during the first half against the Miami Dolphins at Hard Rock Stadium on November 28, 2021 in Miami Gardens, Florida. (Photo by Cliff Hawkins/Getty Images)

The Carolina Panthers are heading into the 2022 league year with a great deal of uncertainty at the quarterback position.

Former franchise superstar/league MVP Cam Newton was brought into the organization as an injury replacement for Sam Darnold midway through the Panthers’ 2021 campaign. And while the initial excitement for this reunion was through the roof, the experiment ended up resulting in a disappointing end to the year.

Newton finished his 11th NFL season with an 0-5 record as a starter.

That being said, the Panthers haven’t ruled out a return for Newton in 2022. According to Pro Football Network’s Tony Pauline, the team is open to re-signing the veteran QB this coming season.

“The Carolina Panthers are another team in immediate need of a plug-and-play quarterback,” Pauline wrote. “If they can bring one in via trade, they will do it in a heartbeat. Head coach Matt Rhule’s job is on the line, and he must win this season.

“If they can’t make a big move for a signal-caller, I’m told Cam Newton is still an option for the team.”

If you think the Panthers have written their final chapter on Cam Newton, you may be mistaken. https://t.co/eTd3bMLaza

The NFL world took to Twitter with reactions to this news.

“I’m sorry but it’s not looking good for him. He showed us last season what he had left in the tank and nobody was impressed, sometimes he should humble himself,” one fan wrote.

“If y’all care about Cam, wish him well on his next team. He deserves a legit shot on a legit team, not just scrap heaps,” another said.

GIVE CAM A FULL YEAR!!! Seriously, give him a chance with actual preparation during the preseason as see the results @Panthers! https://t.co/L6qO6f7XdI pic.twitter.com/aeoDvDz2Sc

Who do you think should be the Panthers’ starting quarterback in 2022?