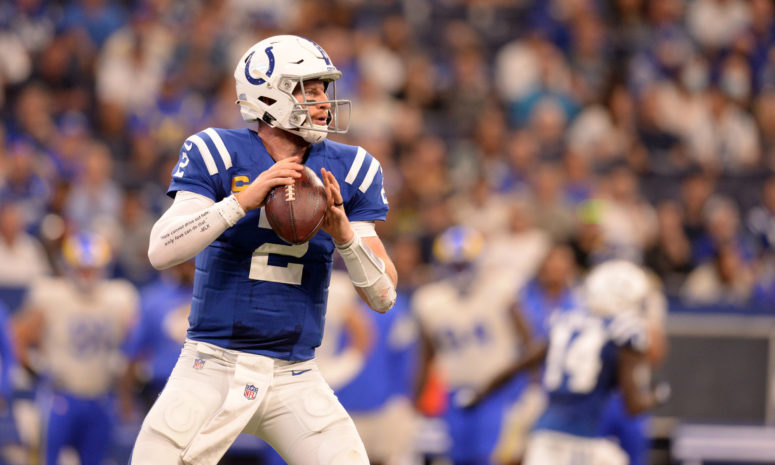 INDIANAPOLIS, IN - SEPTEMBER 19: Indianapolis Colts Quarterback Carson Wentz (2) drops back for a pass during the NFL football game between the Los Angeles Rams and the Indianapolis Colts on September 19, 2021, at Lucas Oil Stadium in Indianapolis, Indiana. (Photo by Michael Allio/Icon Sportswire via Getty Images)

The future of Carson Wentz as an Indianapolis Colt is a bit murky.

Colts general manager Chris Ballard spoke to the media at the NFL Combine and doesn’t know what the future holds for Wentz.

“I don’t have the direct answer for you,” Ballard said. “We’re working through it…Ultimately we’ll do what’s best for the Colts.”

Colts GM Chris Ballard on Carson Wentz’s future with Indy: “I don’t have the direct answer for you. We’re working through it…Ultimately we’ll do what’s best for the Colts.”

That is…not good to say the least.

Ballard seems like he’s working on upgrading over Wentz since the Colts weren’t able to make the playoffs with him under center this year.

Wentz finished the season with 27 touchdowns and seven interceptions off of 3,563 yards through the air. However, it was his two-turnover day against Jacksonville in Week 18 that had Indianapolis miss the playoffs.

It’s not known who Ballard is going after to replace Wentz, but the NFL world knows that he’s likely done in Indianapolis.

things are that bad huh?

An admirably honest answer from Ballard on the future of the Colts at Quarterback.

Tacitly admits the team want to upgrade but acknowledges the difficulty of getting a great Quarterback. https://t.co/STY09nJJdi

Not exactly an endorsement 😯 https://t.co/gWWy4HzOUZ

Confirmed. Wentz is a goner. https://t.co/GpDvpgLwm1

working through what exactly? 😂 https://t.co/4kQn5Uuvhf

With free agency right around the corner, a move could be coming soon.