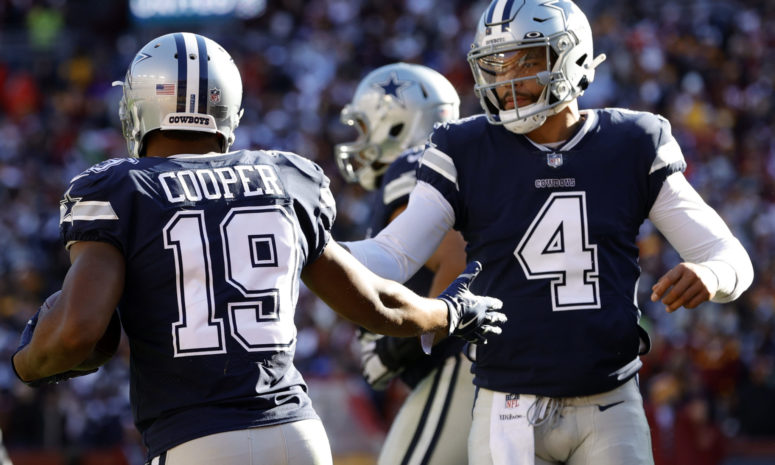 LANDOVER, MARYLAND - DECEMBER 12: Dak Prescott #4 of the Dallas Cowboys celebrates with Amari Cooper #19 after a seven-yard touchdown pass against the Washington Football Team during the first quarter at FedExField on December 12, 2021 in Landover, Maryland. (Photo by Rob Carr/Getty Images)

The Dallas Cowboys didn’t say much when it came to Cooper playing for the team moving forward.

Executive Vice President Stephen Jones said it’s too early to know if Cooper will be on the roster next season. He also confirmed that conversations are ongoing.

In terms of a pay cut, Jones said, “I don’t want to address any of that as far as the details of any contract.”

Cowboys EVP Stephen Jones on whether Amari Cooper to be on roster in 2022: “It’s too early for me to address that.” Conversations ongoing, he added. Pay cut on table? “I don’t want to address any of that as far as the details of any contract.” Background: https://t.co/hJ4auiX0ZC

When healthy, Cooper is the best receiver on the Cowboys. He finished the season with 865 yards and eight touchdowns on 68 receptions.

It’s a step down from where he was the previous two seasons when he had 1,110+ yards and 13 combined touchdowns.

The NFL world would be a bit upset if Cooper weren’t a Cowboy next year.

Stephen Jones is a joke, this isn’t a ongoing contract negotiation. https://t.co/IDHWYlVFYy

If we get rid of amari cooper I will no longer watch football https://t.co/eYpReMHevF

Cowboys about to get worse cause the front office is dumb >>>>>>> https://t.co/jGE7GpDHr1

This certainly doesn’t seem like a glowing endorsement that Amari Cooper, who is currently still under contract, will still be in Dallas next season. https://t.co/zl596VHNSS

All Stephen have to say is… Amari Cooper is still under contract 🤷🏽‍♂️ Cowboys foolishly talk a little too much… https://t.co/cLsK1psjFG

The Cowboys are looking to go deeper into the playoffs next season after losing in the first round this year.

Dallas fell to San Francisco after winning the NFC East and earning the third seed.

If the Cowboys do want to make a long playoff run, it would behoove them to keep Cooper in the fold.