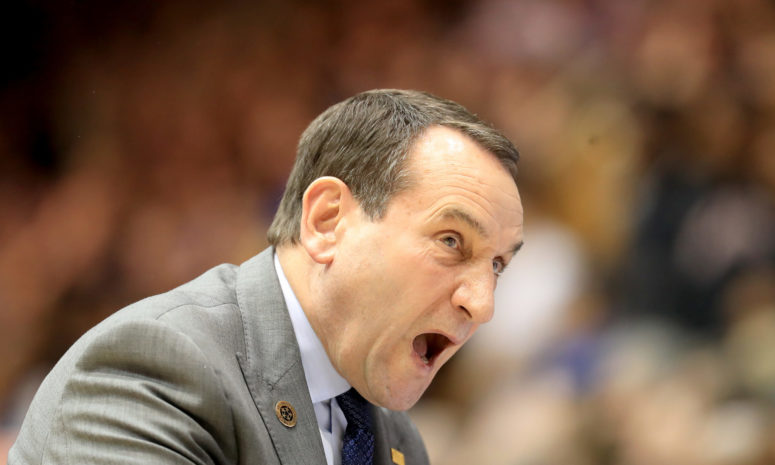 Duke made a somewhat atypical request ahead of this year’s NCAA tournament. The Athletic’s Seth Davis confirmed ESPN’s Wright Thompson report that the Blue Devils asked to be placed in the Midwest region.

When landing a top seed, Duke usually opts to play in the East region, allowing them to play closer to home. However, the Midwest will emanate from Chicago, Mike Krzyzewski’s hometown.

“For clarity, every DI school has been asked, IF you are the OVERALL No. 1 seed, which first/second-round site and which regional site is preferred,” Worlock wrote. “If you aren’t the overall No. 1, your submission goes in the trash and bracketing principles are used.”

For clarity, every DI school has been asked, IF you are the OVERALL No. 1 seed, which first/second-round site and which regional site is preferred. If you aren't the overall No. 1, your submission goes in the trash and bracketing principles are used. https://t.co/xgtUhYTmhc

Duke has climbed to No. 4 in the national rankings amid a seven-game winning streak. That gives the Blue Devils a puncher’s chance of earning the NCAA tournament’s top overall seed.

However, most fans don’t know the minutiae of NCAA regional aligning. Also, a lot of them simply don’t like Duke.

Some questioned Coach K’s ego upon reading the news.

oh wow, mike krzyzewski is making college basketball about himself again. i for one am shocked https://t.co/CIr5uj2Ze9

Remember, this entire thing isn’t about him, though. 😂😂😂 https://t.co/2hOmAvCH62

Others wondered if Duke wanted any other special accommodations.

Does he get to pick their opponents too? https://t.co/CU9UlSNmx9

It’s been awhile since a rather banal situation involving Duke generated so much anger. Glad we could do this one more time before K goes https://t.co/2F3WaT1QbR

Before getting this request honored, Duke will have to close the regular season strong against long-time rival North Carolina on Saturday. Coach K’s squad would then need a strong ACC tournament showing to land the Big Dance’s top seed.