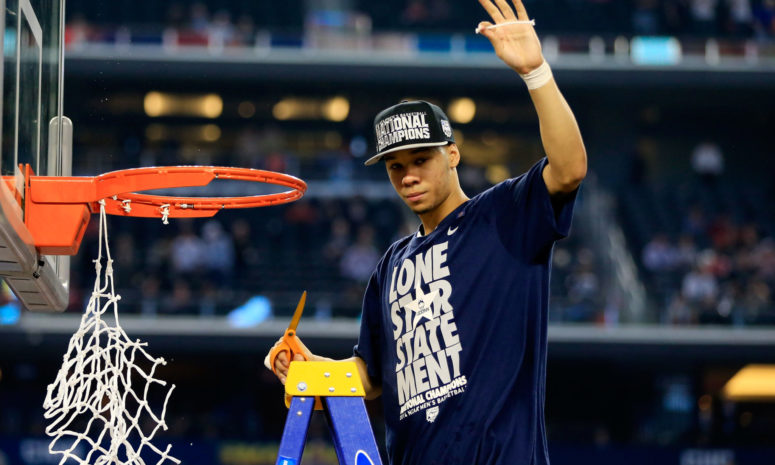 ARLINGTON, TX - APRIL 07: Shabazz Napier #13 of the Connecticut Huskies cuts down the net after defeating the Kentucky Wildcats 60-54 in the NCAA Men's Final Four Championship at AT&T Stadium on April 7, 2014 in Arlington, Texas. (Photo by Jamie Squire/Getty Images)

As the Russian invasion of Ukraine continues, more and more American athletes are distancing themselves from the belligerent nation as a response.

According to ESPN NBA insider Adrian Wojnarowski, former NBA guard and UConn superstar Shabazz Napier is leaving the BC Zenit Saint Petersburg basketball team. Per the report, Napier was nearing his return to the team after an ankle injury.

Napier is in his first year with the Russian team after not playing in the NBA since the 2019-20 season. He is one of eight Americans under contract with the team.

Veteran NBA guard Shabazz Napier is leaving BC Zenit in Saint Petersburg amid Russia’s invasion of Ukraine, sources tell ESPN. Napier had recently recovered from an ankle injury and neared a return to the EuroLeague team, but the attack has prompted his departure back to the U.S.

But Napier may not be the last player to leave the team in response to the Russian invasion. Hungarian forward Mindaugas Kuzminskas is reportedly leaving the team as well for the same reason.

Shabazz Napier played four years at UConn, winning two national titles under Jim Calhoun and Kevin Ollie. In 2014 he won AAC Player of the Year, the Bob Cousy Award, and was a consensus First-Team All-American and earned NCAA Final Four Most Outstanding Player en route to a national title.

Napier went 24th overall to the Miami Heat in the 2014 NBA Draft. But he struggled to make an impact and moved to six different teams over the course of six years.

With his time in Russia now apparently over, it will be interesting to see if the 30-year-old Napier tries his hand at an NBA comeback or keeps playing his trade on other European teams.

Will Shabazz Napier play on an NBA team again?