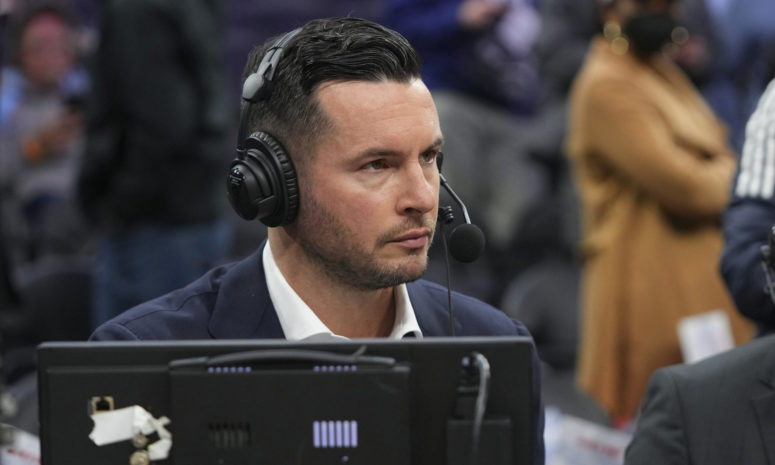 PHILADELPHIA, PA - MARCH 02: ESPN analyst JJ Redick looks on prior to the game between the New York Knicks and Philadelphia 76ers at the Wells Fargo Center on March 2, 2022 in Philadelphia, Pennsylvania. (Photo by Mitchell Leff/Getty Images)

Former NBA guard J.J. Redick has been doing studio work for ESPN, but he made his nationally-televised game debut on Wednesday night.

Redick, one of the best shooters in NBA history, was on the call for the Philadelphia 76ers vs. New York Knicks game on Wednesday evening. It was James Harden’s home game debut in Philadelphia.

The former Duke Blue Devils star received great reviews for his performance on ESPN this evening.

Redick also received a nice ovation from the Philadelphia crowd. He played for the Sixers for multiple seasons.

JJ Redick gets a standing O from the Philly crowd 🙌

Redick admitted that the two best years of his career came in Philadelphia.

“Nothing but love for Philly…Literally the two best years of my career.” @jj_redick after hearing the Sixers crowd cheer for him.

ESPN was excited to get Redick on the air.

NBA fans were appreciative of his work, too.

JJ Redick doing a really nice job on color commentary. I say this as someone who absolutely loathed JJ in college.

JJ Redick is so good on the broadcast that I can (almost) forgive all the Coach K talk.

My only problem with how good JJ Redick is in the booth is that it’s gonna keep him so busy that he won’t be able to spend as much time fixing the studio shows as I’d like.

Been impressed by @jj_redick on the call for this Knicks-Sixers game.

Smart, prepared – all that good stuff

Redick shared some of his weekend plans, too. He will be in attendance for the Duke vs. North Carolina game on Saturday night – Coach K’s final home game.

JJ Redick just said on air he’ll be at the Duke game Saturday and he will be emotional. pic.twitter.com/nSMMNTgnD9

Duke and North Carolina are set to tip off on Saturday night.