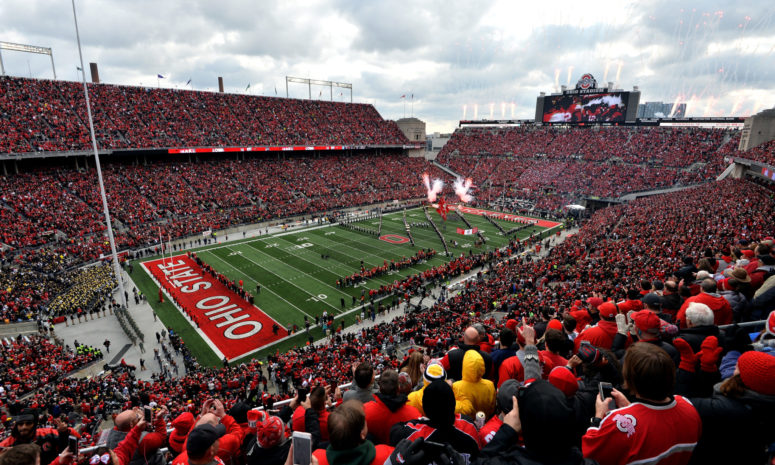 COLUMBUS, OH - NOVEMBER 26: A general view of Ohio Stadium prior to the game between the Michigan Wolverines and Ohio State Buckeyes on November 26, 2016 in Columbus, Ohio. (Photo by Jamie Sabau/Getty Images)

Michigan quarterback J.J. McCarthy gave Ohio State some bulletin board material on Monday. And it didn’t take long for the Wolverine’s quote to go up at the Woody Hayes Athletic Center.

“For us, the whole 10-year stretch of us not winning, that’s all we know is beating Ohio State right now,” McCarthy said in an interview with Wolverines Digest. “So we’re going to keep that going,” the QB added.

Shortly after, Buckeyes insider Alex Gleitman shared a photo of the quote on a screen at Ohio State’s facility.

It didn’t take long for JJ McCarthy’s quote to get up at the WHAC #TheGame pic.twitter.com/KDw38xdq97

McCarthy played just six snaps against OSU as the backup to senior signal-caller Cade McNamara last season. But that didn’t stop the former five-star prospect from kicking the Bucks while they were down.

Michigan kicked Ohio State’s teeth in, in their late season rivalry matchup on the way to a Big Ten title and College Football Playoff berth. The Wolverines would go on to fall to the eventual national champion Georgia Bulldogs.

It’s been a pretty noisy offseason for UM, undergoing lots of change, but the Wolverines still figure to be a major player in the conference. They’ll look to make it two in a row when they play Ohio State in Columbus next year.