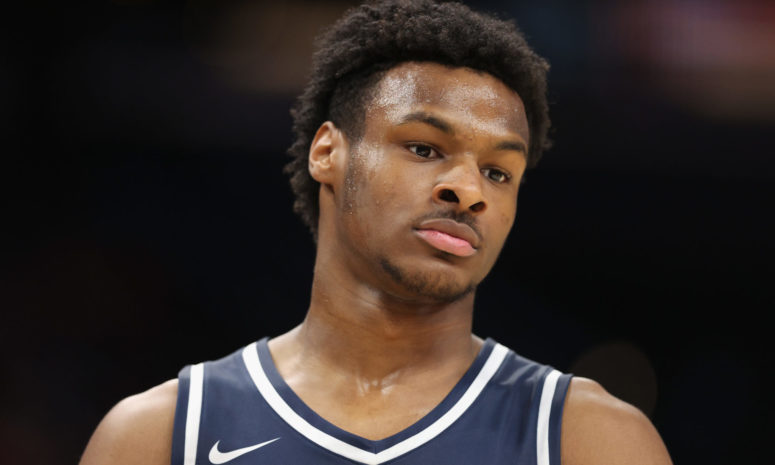 PHOENIX, ARIZONA - DECEMBER 11: Bronny James #0 of the Sierra Canyon Trailblazers during the Hoophall West tournament against the Perry Pumas at Footprint Center on December 11, 2021 in Phoenix, Arizona. (Photo by Christian Petersen/Getty Images)

LeBron James has said in the past that he plans on playing for the Los Angeles Lakers for the foreseeable future. However, he also would like to join forces with his son, Bronny, when he’s eligible to go pro.

“I also have a goal that, if it’s possible — I don’t even know if it’s possible — that if I can play with my son, I would love to do that,” James said in late February. “Is that, like, something that any man shouldn’t want that in life? That’s like the coolest thing that could possibly happen. That doesn’t mean I don’t want to be with this franchise.”

While the idea of LeBron and Bronny playing on the same NBA team is quite awesome, there’s no guarantee it’ll come to fruition.

NBA insider Marc Stein recently spoke to a personnel member of Eastern Conference about their thoughts on Bronny as a prospect.

Bronny is certainly improving, but it sounds like he has a lot more work to do in order for him to be viewed as a top-tier prospect.

“He won’t be eligible for the NBA until the 2024 draft and, based on my own checking with various teams, Bronny wouldn’t be a draft candidate that quickly — based on where he is as a player today — without the nudge he’s getting from Dad, who will turn 40 during the 2024-25 season,” Stein wrote. “As one Eastern Conference personnel voice tried to gently put it: ‘I don’t think he’d be a one-and-done player if he wasn’t LeBron’s son.'”

Only time will tell if Bronny and LeBron can call each other teammates.