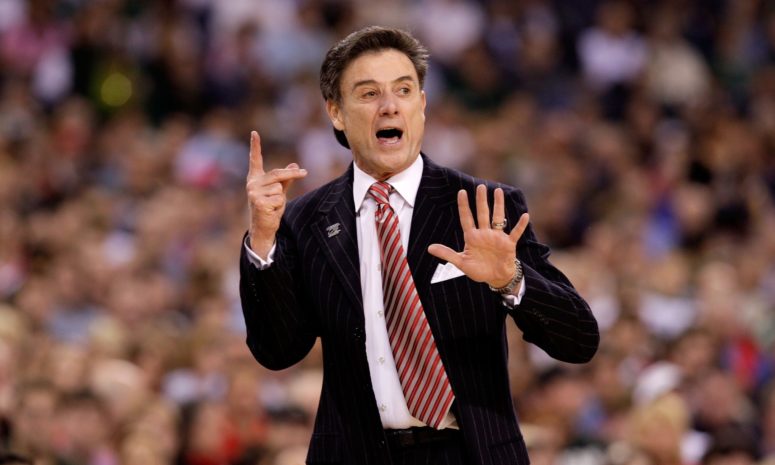 INDIANAPOLIS - MARCH 27: Head coach Rick Pitino of the Louisville Cardinals against the Arizona Wildcats during the third round of the NCAA Division I Men's Basketball Tournament at the Lucas Oil Stadium on March 27, 2009 in Indianapolis, Indiana. Louisville won 103-64. (Photo by Andy Lyons/Getty Images)

“He’s their number one choice,” Eric Bickel added. “They’re going hard after him right now and there are a couple donors that are leading the charge.”

It didn’t take fans long to start reacting to the news that Pitino might be coming to Maryland as the team’s next head coach. Reactions were mixed, but most fans believe it would be a fun move.

“Oh this would be fun…” one fan said.

One fan believes the Terrapins would be in the Final Four in just a few years if Pitino becomes their head coach.

lol…. He'll have them in the final four in 3 years. https://t.co/bEyxPG7XwN

One fan doesn’t think Pitino will be there for very long – even if he is hired.

“Rick Pitino is a great coach but he brings baggage with him, and that means he probably wouldn’t be here long,” the fan said.

Rick Pitino is a great coach but he brings baggage with him,and that means he probably wouldn't be here long. https://t.co/7fpxbwIph8

Pitino had immediate success after taking over the Iona Gaels. During the 2020-21 season, he led the team to a 12-6 record.

So far this season, the Gaels own a 24-5 record and are in the think of the NCAA Tournament conversation.